Wanna blog? Start your own hockey blog with My HockeyBuzz. Register for free today!
The Islanders had their first “store” signing on Friday afternoon at the Barclays Center. They were very lucky as the weather actually cooperated with them. A beautiful afternoon had fans lining up outside the doors to the Nets Team store waiting to get in to meet a FOUR hockey players.

I’d like to thank @CalicoAvenger for being my woman on the scene for the photos and reports from Friday.

As with many of the signings, email blasts and social media were the major form of advertising for the event with only the first 150 fans guaranteed entry and autographs. I will say, the photos of people lined up on a busy street instead of inside a mall or the Coliseum lobby is unusual. I’m pretty sure those passing by were wondering what was going on and more people were more familiar with the Shake Shack across the street than the Islanders sitting in the store. The 50% off merchandise incentive was for Nets gear, as it is the Nets store, but they did have Isles shirts and caps emblazoned with the current Isles logo. This begs the question if the Isles will have their own store at the Barclays, or just a kiosk.

With the Ratner group having been awarded the Coliseum renovation, keeping an Isles-centric retail outlet in Uniondale is likely. Considering how much money the Isles put into building that team store at the Coliseum, I’d hope so.

Whether or not @leeberr09, @ColinMcDonald13, @conhockey19 & TJ Brennan were asked “Who are you?” as they signed pucks and cards didn’t really matter. It’s starting. The Isles are beginning to carve out their niche in their new home. 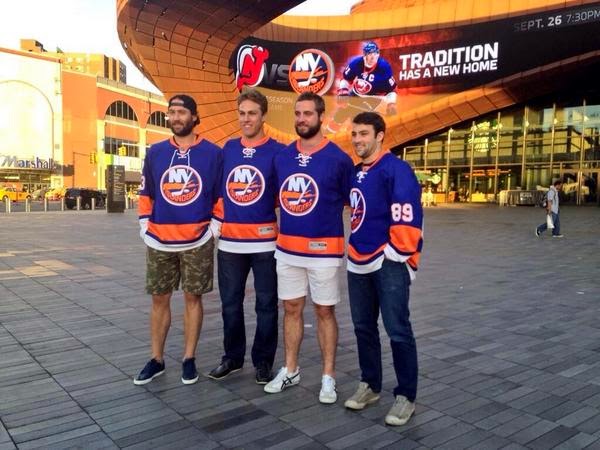 Trainspotting: This would never happen if a concert was at the coliseum

A few Islanders took in the Luke Bryan concert at Barclays and took the train home. Yes… the train. Is that really how bad the parking is at the Barclays that NHL players have to use public transportation? Did they take a cab to the train station from the hotel? Well, they should enjoy this now because as the season gets under way, more and more people will recognize them.

Rookie Camp also opened Friday and will continue for a few days before NHL camp officially opens for the Isles on the 18th. According to the Isles Cory Wright:

The competition at this year’s camp is stiff, as the Islanders system is the deepest it has been in years. A fifth of the invitees are first-round picks (Ryan Strome (2011), Reinhart (2012), Ryan Pulock (2013), Michael Dal Colle and Josh Ho-Sang (2014)) and all in camp have hopes of making the Islanders roster.

Reinhart, Strome and Pulock have outgrown their junior eligibility and will play professionally next season, either in Bridgeport or on Long Island, while Dal Colle and Ho-Sang still retain OHL eligibility.


The always outspoken Joshua Ho-Sang had his usual media attention and is quoted:

“I know it would be incredibly difficult to stay, but you know, I’m coming in with the mentality to push myself and at least make the decision to send me back to junior really hard,” Ho-Sang said. “[I want to] show them that if I’m not ready now, I’m making the progression and the steps to be ready in the next couple years.”

Two goalies are at prospect camp that I have never heard of; Shane Owen of the CHL and Philippe Trudeau of the OHL. Well, okay then.


The death of the Spin-o-rama:
No, it wasn’t really Ryan Strome who caused the NHL to rule to disallow the Spin-o-rama move in shoot-outs or penalty shots, but he will be the last NHL player to score on one. Good way to get into the hockey history books as any.