Wanna blog? Start your own hockey blog with My HockeyBuzz. Register for free today!
The Pittsburgh Penguins broke their draft weekend silence as they made draft selections on the second day of the 2021 NHL Entry Draft. They selected five players including Tristan Broz in the second round at pick #58 overall.

Once you get out of the middle of the first round the probabilities of these players making the NHL really drops, but the probabilities are more evenly spread throughout the different rounds. The Penguins have five lottery tickets they are hoping to pan out.

The last draft pick used by the Pens on a player who has played for them: Dominik Simon, fifth round, 2015.

My 2021 NHL Draft grades, with notes on as many players as I could muster. Individual team files are linked within. https://t.co/QD7RUugx4T

Thank you to all for reading and subscribing this draft season.

The Penguins didn’t have many picks or high picks to work with. Tristan Broz could play games, but it’s overall hard to see this class generating much for the Penguins.


Not exactly a huge writeup on the Penguins. Their D- is tied for the worst overall grade with the Washington Capitals. This doesn’t mean all the players are going to bust. It means their probability isn’t great to be difference makers at the NHL level and when you don’t have a lot of picks and most of them are in the 7th round it is what it is. It’s also why you can’t do the hybrid “we still want to be contenders, but also want to build up the long term”. There was a time where the Penguins could have done both. Jim Rutherford closed the door on it when he traded the entire cupboard of futures year after year. Pittsburgh is past the point of no return. You need to choose to compete or rebuild.

My thoughts on the 192 selections of Rounds 2-7, ranking all 32 draft classes @TheAthletic: https://t.co/IlR1Grs2Uk

The Penguins had to wait until 58th to make their first pick of the draft. Pens fans are no strangers to that at this point. But they did well with Tristan Broz, my 45th-ranked player. He doesn’t carry the weight around that Samuel Poulin and Nathan Legare, but his game actually reminds a bit of both in some ways. He’s got a versatile offensive game, untapped goal-scoring upside that doesn’t show up in his stats, and a strong understanding of how to use pockets of space.

I also like the bet on Isaac Belliveau, a highly productive kid on a stacked Rimouski roster a year ago who then had some ups and downs with two teams this season. His skating is a major concern, but he’s a capable puck mover.

I was a little surprised by all three of their seventh-round picks, although it’s hard to be too critical there.

Let’s talk about the most promising of the Penguins draft picks Tristan Broz. He’s ranked 57 here and the Penguins took him at 58 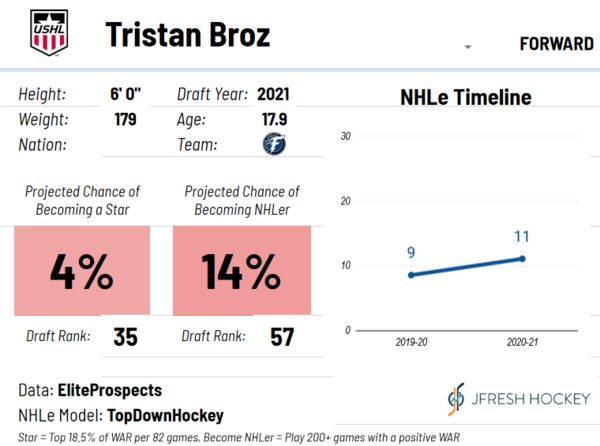 Broz has been playing on Fargo in the USHL the past few seasons and this past year he had 51 points in 54 games. This checks a very basic box for me and it is a box you can check without pouring over hours of “tape” or game film or whatever. Does the player have an offensive pulse at the lower levels of hockey? If they don’t the likelihood of them being able to do the non-offensive related things as they jump up each level isn’t promising. Broz has an offensive pulse so he clears that basic hurdle. Next year he will be heading to college and will be playing at Minnesota. Tracking his offensive numbers moving forward will give us a better idea of his probability of panning out. If he puts up decent numbers as a true freshman it would be very encouraging. If he gets through his sophmore year and things don’t look like they are getting any traction that would be an early indicator of him stalling.

It will be a process which takes a few years. It likely won’t help Crosby and Malkin if it pans out. This is the dichotomy the Penguins are in.

Here are the other draft picks the Penguins made on day two. 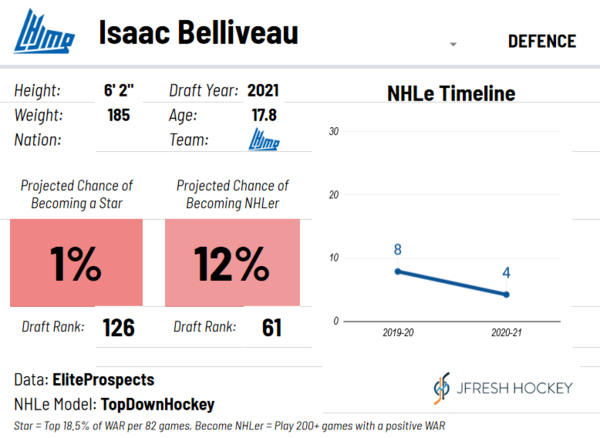 Bellieveau plays in the QMJHL. It isn’t my favorite league to draft from unless the players offensive numbers are jumping off the page. His 2019-20 season in Rimouski had him with 53 points in 62 games. Not too shabby for a defenseman. His numbers dropped off last year as he only had 17 points in 37 games between Rimouski and Gatineau. What made this draft so difficult was the limited samples because of COVID. If you see his numbers bounce back to the 2019-20 standard it would be encouraging.

Here are the seventh round selections 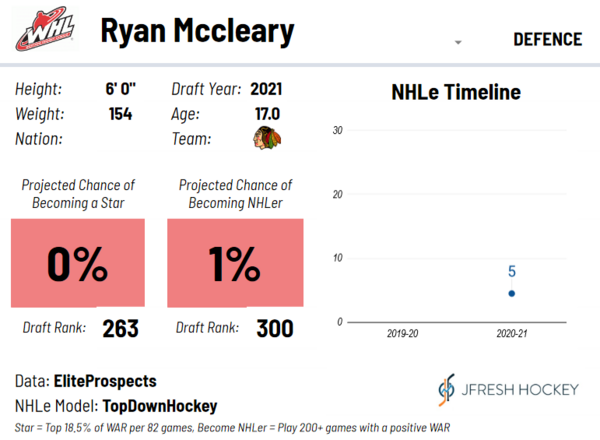 Pittsburgh selected Daniel Laatsch with the 215th overall pick. He does not have an NHLe card available.

He is heading to the Wisconsin Badgers next year.

At 218th overall the Penguins selected Kirill Tankov who doesn’t have an NHLe card, either. However, he does have some youtube highlights and they are pretty great. I can’t pretend to know how good of a league the MHL is in Russia, but when you’re picking 215th overall I think reaching for somebody displaying raw offensive skill is the best bet you can make.

Of course the big difference is Malkin was doing this in the Russian Super League while Tankov in the MHL. None the less I like swinging for the fences this late in the draft.

Join the Discussion: » 1 Comments » Post New Comment
More from Ryan Wilson
» Winners and losers from day one of the 2021 NHL entry draft
» Brandon Tanev gone, but are Penguins looking for more overpriced depth?
» Best and worst case scenarios in expansion draft for Penguins
» I Danault if it would work, but maybe
» Go all in or rebuild, a hybrid approach is dead on arrival