Wanna blog? Start your own hockey blog with My HockeyBuzz. Register for free today!
Hello All,

The Washington Capitals lost to the Arizona Coyotes by a score of 3-2 on Saturday night. The Caps blew a 3rd period 2-goal lead and allowed the game winning goal with 35 seconds left in the game. Ouchie. On the bright side, Ovechkin scored a power play goal to officially move him into #1 all-time past Gordie Howe for most goals scored with a single team in NHL history. What made it even cooler for me was that I was able to attend the game with some family and friends and it was awesome to experience live!

Here Are the Stats From the Game: 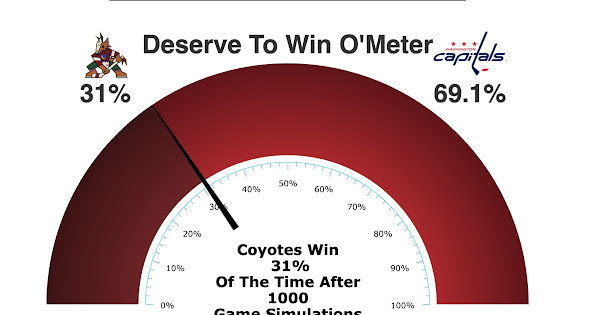 The Loss - The defeat was a crushing disappointment. The Caps led all major statistical categories and held a 2-goal third period lead. Against the Coyotes, this should be as good as a win at that point as possible. A bounce here and a bounce there and the Caps didnt even manage to get a point.

Ovechkin - Man, was it freaking cool to see him break this record live. Here is the goal:

Another pretty cool tweet/picture posted by the Capitals. The picture on the left was Ovechkin’s first career goal:

Here is a graphic from CapitalsPR that highlights his Gr8ness

Alex Ovechkin scores on the power play to give the Capitals a 1-0 lead. It marks Ovechkin's 787th career goal, moving him past Gordie Howe (786 goals with the Detroit Re Wings) for the most goals scored by a player with a single franchise.

Bone to Pick - In a 2-2 game with two minutes left in the third period. The upper bowl of Capital One Arena was relentlessly trying to start the “Wave.” While I have no qualms against the wave, the timing was absolutely terrible and half the crowd in the upper bowl were more focused on that, rather than cheering on the Caps in a tied game late in the third. The Coyotes scored 1.5 minutes later. I blame the guy in the section to my left for starting the movement. The Caps need us cheering them on “Lets Go Caps” and clapping for all the big plays. That's just me, thoughts?

That is a fairly brutal stretch of hockey. Let’s hope for some good bounces and a billion Ovechkin goals. That is all for now, Go Caps!