Wanna blog? Start your own hockey blog with My HockeyBuzz. Register for free today!
In 1974 then 28-year old Mike Emrick was finishing up his formal graduate education at Bolling Green State University to prepare himself for a potential career as a college professor of communications by completing his Ph.D. degree there in that field. Despite having grown up in a small rural basketball mad community in central Indiana, however, his heart was nonetheless set on a very different career path than a University professorship: being a play-by-play broadcaster in professional hockey.

After being rejected by more than a hundred hockey teams that he had applied for a broadcasting gig with, Emrick amazingly got his break when he was offered a job out of the blue by the IHL Port Huron (MI) Flags for the princely sum of $160 a week. He jumped at the chance and fortunately for the world of hockey has never looked back.

Three years later Emrick moved up when he was hired by the Philadelphia Flyers to be the voice of the nascent AHL Maine Mariners moving to the Pine Tree State along with Flags' coach Bob McCammon. In the 43 years since Doc Emrick has become the most honored American hockey broadcaster in history.

Among his dozens of awards he has been showered with are membership in both the Hockey Hall of Fame and being the only broadcaster in the US Hockey Hall of Fame, the NHL's Lester Patrick Award, and also being the only hockey play-by-play broadcaster to ever win a national EMMY Award, an accomplishment that with his winning the 2020 award earlier this week he has captured a remarkable EIGHT times in the past decade including the last seven in a row! 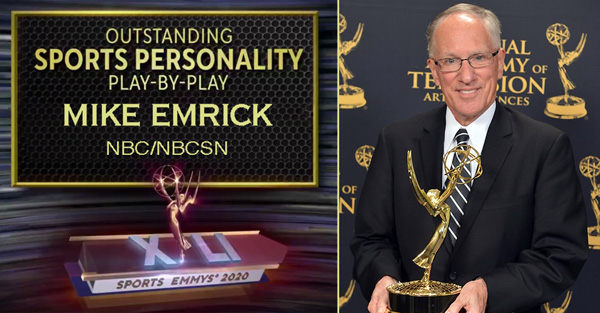 Like a college professor he almost became, Doc has long had his summer months off beginning after calling yet another Stanley Cup final in June to relax before the start of a new hockey season in October. This year, however, has obviously been vastly different for the now just turned 74-year old veteran of calling more then 3,500 hockey games over the past 46 seasons. While he did not call a regular Stanley Cup playoff in April, May and June this year with the sudden "pause" for the NHL in mid March owing to the COVID-19 pandemic, Doc is now in the midst of calling on NBC and NBCSN the NHL's unique August and September 2020 Stanley Cup chase being played in a "bubble" in Toronto and Edmonton before empty arenas.

That being the case, the voices of Emrick, his fellow broadcasters on NBC, and their Canadian counterparts are the only way the hockey action can get to US, Canadian and world wide NHL fans, and for many of them including Doc they are also doing so remotely. For Doc that means he is calling games being played in both Edmonton and Toronto not from his usual perch in a broadcast booth high above the ice, but from watching it on large, high resolution monitors in a studio built for him by NBC in the basement of his Michigan home not far from Detroit. 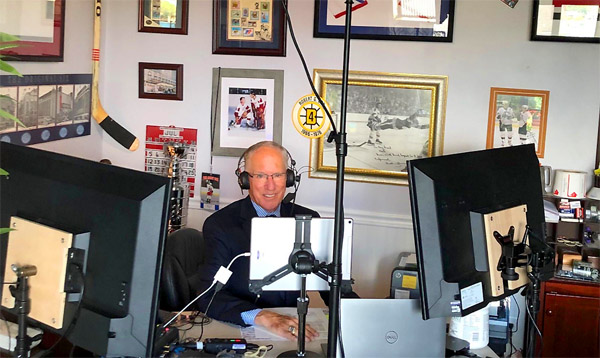 "It is obviously a little different than being in the rink," my friend and colleague of 43 years told me over the phone earlier this week. "But NBC has done some real technical magic to make this possible especially when it comes to seamlessly mixing my play-by-play call from Michigan together with Eddie Olczyk's analysis from his location in the NBC Sports studios in Stamford, CT, and either Pierrre Mcguire in Edmonton or Brian Boucher in Toronto from their rinkside posts "Between the Glass". The technical wizards have been able to coordinate both the video and audio for all of us in real time with a maximum "delay" of less then half a second. So even the three of us a spread over two countries and many hundreds of miles apart, to the audience it sounds no different than is we were all ins the same building." 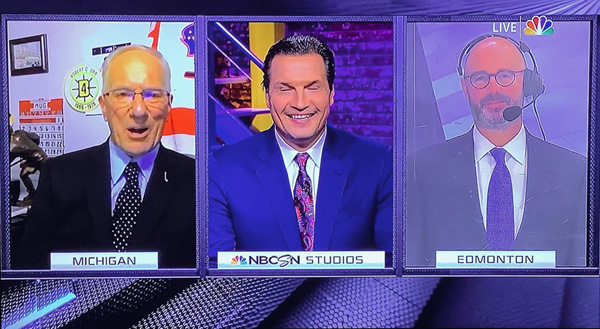 Doc in Michigan, Edzo in Stamford, CT and Pierre in Edmonton

Being in his basement studio in Michigan, Doc only appears on camera (supplied by an iPad mounted in front of him) once in each telecast which he does for his opening setup remarks delivered before the game starts. As a passionate student of hockey history and a man who has never lost his love and respect for his broadcasting roots in minor league hockey in the IHL and AHL from 1974 to 1980 when he moved up to the NHL Philadelphia Flyers Doc has made the setting for that minute or so on camera something special to him. 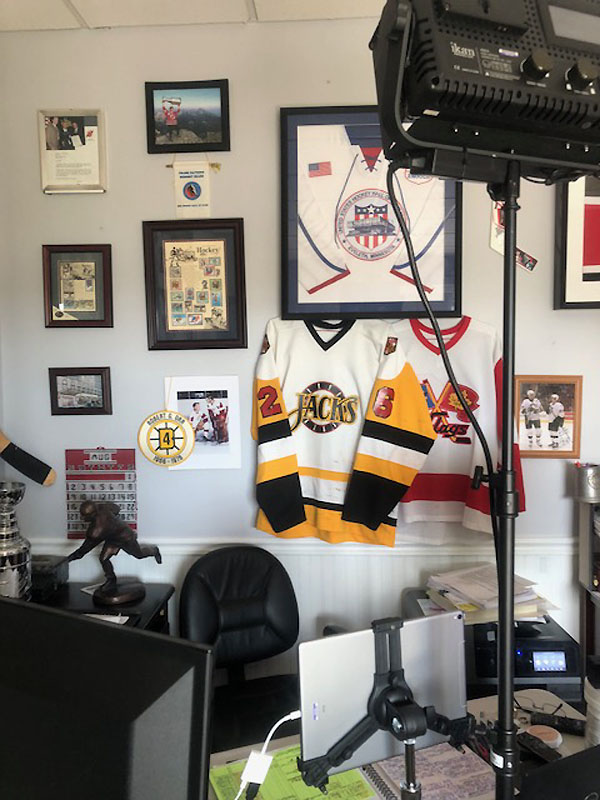 Viewers who look closely will notice that during his opening remarks there will be an historic minor league hockey club's jersey hanging on the wall behind him that will be changing for each game. For the first game he did during the first weekend the jersey was a #10 sweater for the IHL Port Huron Flags, the club Doc began his career with in 1974. This was the number worn by Bob McCammon during his eleven year playing career with the Flags from 1962 to 1973. "Cagey" then coached the club from 1973 to 1977 when he was hired by the Philadelphia Flyers to be the first coach of the new AHL Maine Mariners and brought Doc along with him to be the club"s broadcaster. 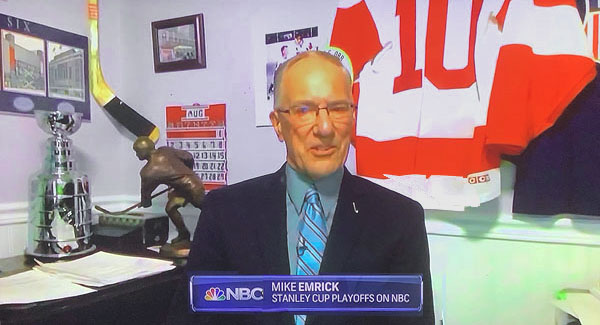 Before the first game of the Chicago Blackhawks-Vegas Golden Knights best-of-seven first round series on August 11 Doc changed the jersey to one from the AHL Baltimore Skipjacks (#26) worn by LW Keith Miller in 1987-88. 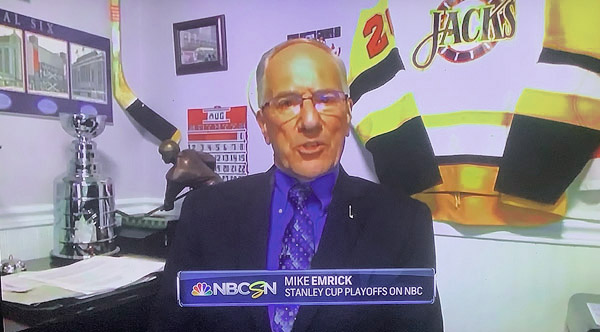 When he does game three of that series on NBC on Saturday night, the jersey you will see will again be an IHL Port Huron Flags sweater in honor of hospitalized Montreal Canadiens' coach Claude Julien who made his pro hockey debut with that club as a 20-year old defensemen in 1980. 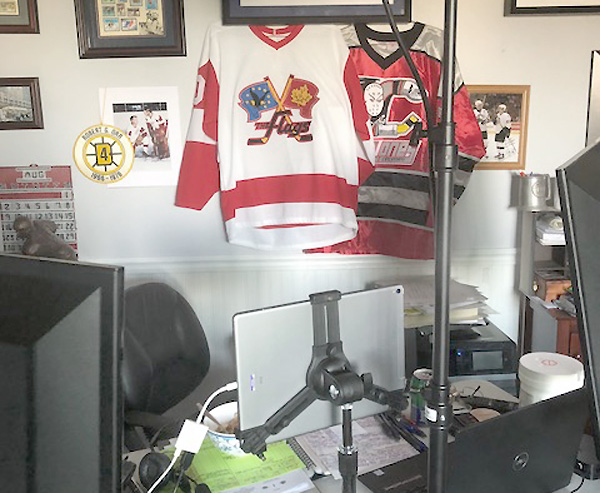 The IHL Port Huron Flags jersey that will be behind Doc for the Chicago-Vegas series game three on NBC on Saturday night.

Among future jerseys will be one from the IHL Cincinnati Cyclones in 1992 and an AHL Philadelphia Firebirds jersey that I am loaning him that was worn during the 1977-78 season by my great friend RW Gordie Brooks who won the AHL's scoring title that season with 98 points on 42 gols and 56 assists. 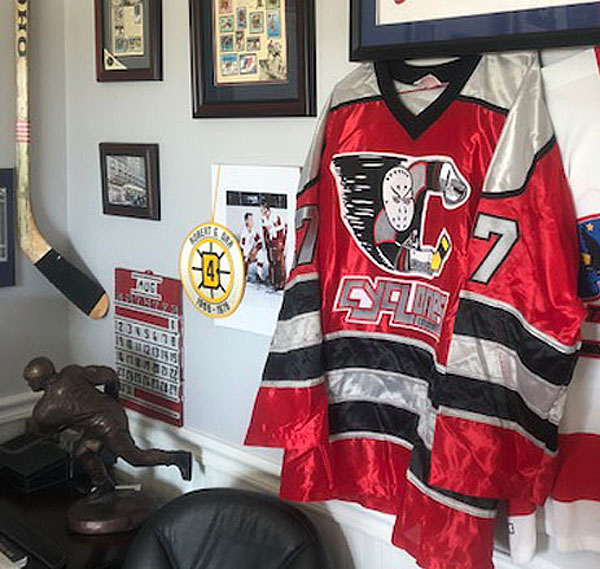 This IHL Cincinnati Cyclones jersey once worn by winger Bill Armstrong in 1992-93 will be on display for the Hawks/Knights Game 5 telecast on August 18..

As the playoffs progress Doc will be working many more games including calling the Finals as he has done for decades now. And before each game that he calls from his home basement studio he will be displaying yet another different classic minor league hockey jersey honoring all those minor pro hockey leagues that because of the pandemic have not been able to award a playoff championship Cup this year. 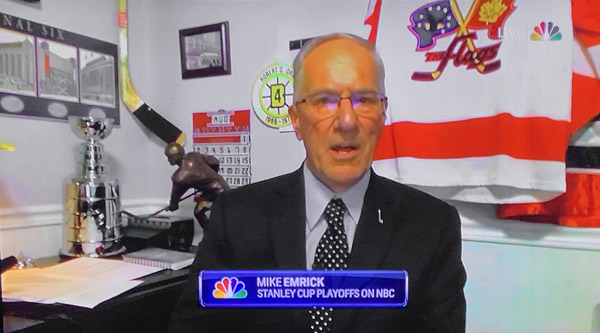