Wanna blog? Start your own hockey blog with My HockeyBuzz. Register for free today!
Bad results all the way around for the Penguins last night. Pittsburgh lost their top pairing in one sequence of events. Both Kris Letang and Brian Dumoulin left the game injured and did not return. This happened very early in the game and forced the Penguins to play with only four defenseman the rest of the game. Justin Schultz, Jack Johnson, Marcus Pettersson, and Chad Ruhwedel did a valiant job for the majority of the time (yes, even Jack Johnson). Usually the team that is trailing is racking up shot attempts. Pittsburgh’s four remaining defenders stayed above the 50% barrier despite leading most of the way. It was impressive. 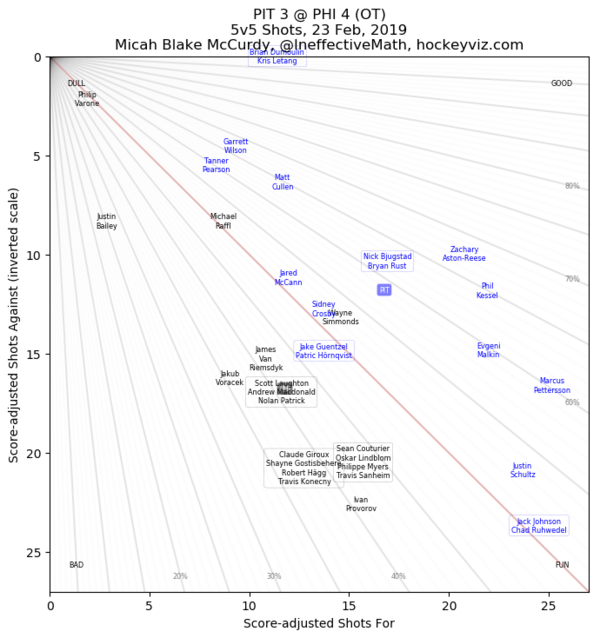 Unfortunately, it wasn’t good enough. Matt Cullen took a stick penalty and opened the door for the Flyers to make it a game late in the third period. Then Matt Murray let in an atrocious goal from Jake Voracek. Claude Giroux’s crowning moment with the Flyers came when he scored in overtime to seal the victory for the host city. It is the likely apex of the Claude Giroux era in Philadelphia. An era which never gained traction because of the decision makers.

Back to the injuries because they have the potential to effectively end the Penguins season. Brian Dumoulin has a concussion. He was on the wrong end of a Wayne Simmonds hit. I don’t think Simmonds was head hunting, but the onus is on the hitter and he made direct head contact. There should be supplemental discipline for being sloppy and knocking a guy out with a head shot. It’s the NHL so who knows.

Wayne SImmonds hits Brian Dumoulin hard, knocking him out of the game while igniting a massive brawl after the play ended that would also force Kris Letang to leave the ice. What CHAOS at the Stadium Series!#LetsGoPens #LetsGoFlyers pic.twitter.com/iWsLAkfIAz

Coach Sullivan: "Dumoulin has been diagnosed with a concussion and is out. Kris Letang is being evaluated for an upper-body injury." -MC

Brian Dumoulin has a concussion. The Penguins are pretty good about publicly diagnosing concussions. This means Kris Letang does not have one. Upper body injury could mean an elbow, shoulder, or even the neck. The latter of those three options would be very problematic given Letang’s surgery past. Here is where he got hurt.

And the ensuing chaos. pic.twitter.com/dgit6SWbmx

The disappointing part of the injury is that Letang brought it on himself. He spazzed out after the Simmonds hit and wildly engaged with Flyers players. Within the chaos he was dropped to the ice violently and is now injured. This could be the dagger in the Penguins season. Letang was playing at a top level and carrying an average at best defense grouping.

The trade deadline is tomorrow so if Jim Rutherford feels the need to make something happen he doesn’t have a lot of time. If Letang is out for the long term I’m not sure it is an injury this team can overcome. There are some options though. One is OK and one is laughable. 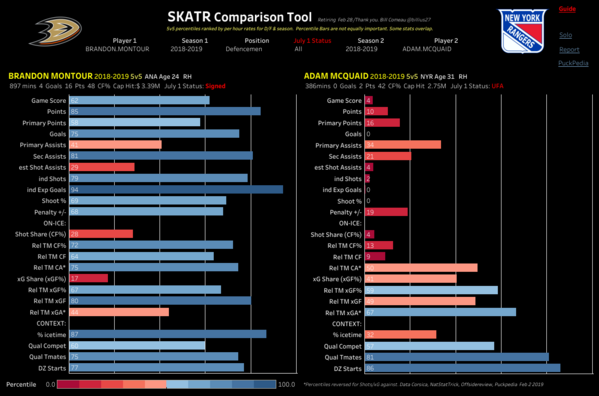 Brandon Montour and Adam McQuaid are both right handed defenseman. Montour can actually play a little bit and McQuaid will make the team much worse. We know McQuaid is available. Is Brandon Montour? I think he is. Since Bob Murray has taken over for Randy Carlyle the Ducks defender has seen a sharp drop in ice time. When the general manager is doubling as the coach it seems like a pretty clear message.

Montour has a 3.39M cap hit for this year and next. This is very reasonable based on the evidence. The 2019 first round pick would be the starting point for a deal. It would not be a surprise if the Penguins went hard at this in an effort to try and save their season. Remember, it isn’t even a guarantee the Penguins make the playoffs right now. They are currently tied with the Hurricanes for the last playoff spot with Carolina holding the tie breaker.

If they do make the playoffs Columbus is loading up for the playoffs. It doesn’t appear like they are going to be trading Artemi Panarin or Sergei Bobrovsky now that they have Matt Duchene and Ryan Dzingel. Being the second wild card and playing Tampa doesn’t sound great. Washington made some OK depth trades in acquiring Nick Jensen and Carl Hagelin. Pittsburgh is playing catch up even without the potential injury problems to their top pair.

Should be an interesting deadline for the Penguins now.