Wanna blog? Start your own hockey blog with My HockeyBuzz. Register for free today!
Tonight is our first Sidney Crosby and Connor McDavid matchup of the season. Always an exciting thing. It isn’t quite Lemieux vs. Gretzky because the age gap is larger. Sid is in his twilight while Connor McDavid is roaring in his prime right now. Nevertheless, the two best players of their respective generations going head to head is fun.

My hope for McDavid, other than leaving the Oilers, is for him to stay healthy throughout his prime. It is something that wasn’t afforded to Sidney Crosby. Sidney Crosby’s 23-year-old season was the Steckel concussion. His 24-year-old season was the fallout from the one prior and limited him to only 22 games. The next year, Crosby’s 25 year old season, there was a lockout to steal half the year and Brooks Orpik finally tried to take a shot on goal and ended up hitting Sidney Crosby in the jaw which robbed him of an MVP. Not the prime Crosby, or we, deserved as fans.

They are/were both pretty prettttty good. 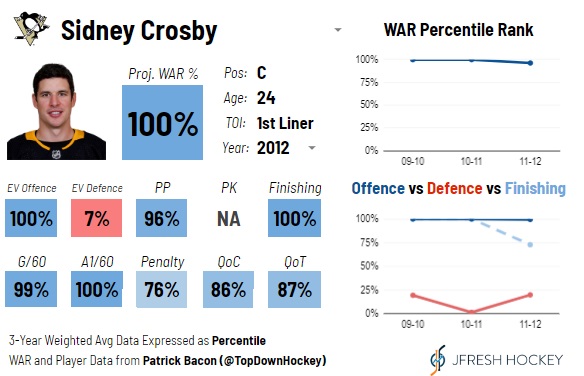 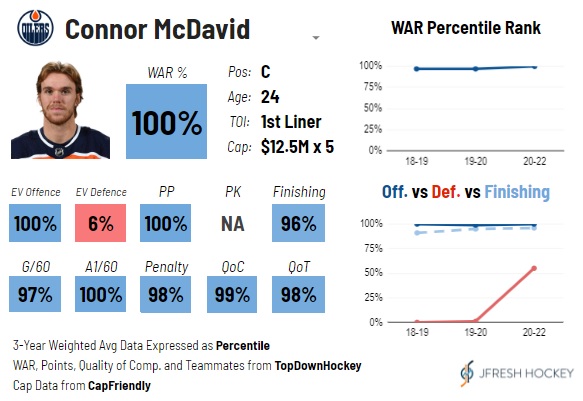 Other than the injury thing differentiating their primes their quality of teammate, while neither suffering, is a little different. Sidney Crosby and Evgeni Malkin join forces on the power play, but as far as 5v5 not as often as they should have. The Oilers also have a duo MVP combo with McDavid and Leon Draisaitl and they elect to play them together way more frequently than 87 and 71. Crosby during his three year stretch from 2010-13 played 248 minutes with Malkin and 899 away. The last three years McDavid has spend 1,040 minutes with Draisaitl and 1,292 away from him. So McDavid isn’t stapled to Draisaitl by any stretch, but they do come close to splitting time with and away evenly. It makes for really entertaining hockey. I have no vested interest in the Oilers so I’m all for it. I think it raises McDavid’s potential ceiling and potential to hit higher point totals. The highlights with the two of them speak for themselves. I love watching it.

While Crosby really didn’t have a say in being hurt during his prime Connor McDavid doesn’t really have a say in how Ken Holland is his GM in the year 2021 in his prime. It is hard to imagine McDavid reaching the same team success as Crosby and it certainly is not his fault. He didn’t choose to be drafted by the Oilers. The look on his face on draft night said it all. The Oilers have been a comically bad organization and for the majority of McDavid’s career the Oilers are just pitiful when he has to take a rest on the bench. When he’s on the ice the Oilers score 55% of the goals in his career. When he’s off it is only 46.8% for Edmonton. Crosby’s Penguins didn’t have to navigate a historically bad GM like Peter Chiarelli. Ray Shero was competent enough. Jim Rutherford hit a couple of homeruns early before regression kicked in. The Oilers have a great record this year so far in a depleted Pacific Division. The underlying numbers for the team don’t scream contender. Their cap situation doesn’t exactly give the flexibility needed after gorging on 29 year old Zach Hyman while also locking in Ryan Nugent-Hopkins and Cody Ceci. McDavid needs some luck, but I do think it would come in the form of playing elsewhere. I hope he gets it.