Wanna blog? Start your own hockey blog with My HockeyBuzz. Register for free today!
The goaltender being discussed today has a terrific body of work in the NHL. He emerged as a high-quality backup goaltender to Braden Holtby when he was in Washington and has really done a nice job overall with his short time in Colorado as the starter. Today’s goalie of interest is Philipp Grubauer.

Grubauer is coming off of a contract that paid him 3.33M and is an unrestricted free agent this summer. While I can’t imagine Colorado is in a rush to move away from Grubauer until his name is signed on the contract he remains a viable free agent option for anybody looking for a goalie via free agency. He more than earned his 3.33M AAV and will be getting a likely raise. If I had to guess it would be somewhere in the 5-6M AAV range, perhaps more. The reason being are his save percentage numbers are tremendous. In his 214 career games he ranks 5th overall in save percentage... of all-time. Yes, he is currently fifth all-time with only Dominik Hasek (.922), Tuukka Rask (.922), Ken Dryden (.922), and Ben Bishop (.921) tied or ahead of his .921. He has been consistently above average his entire career. 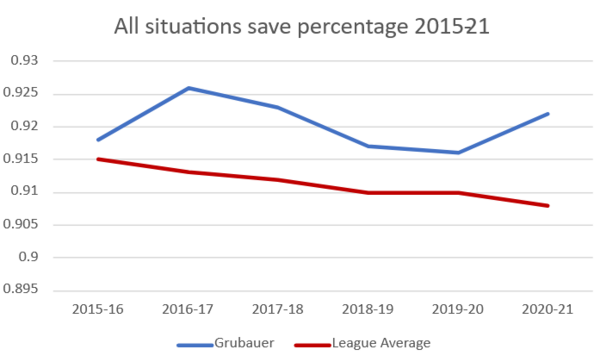 Raw save percentage this high over numerous years is obviously impressive, but when we peel back the layers does his body of work hold up? 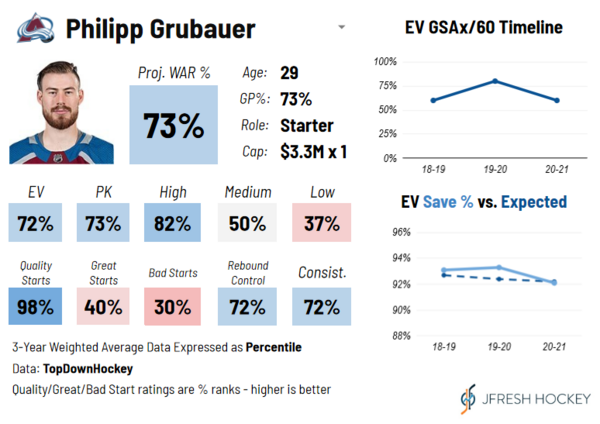 I think things look good here. His high danger save percentage is healthy as are his even strength and penalty killing numbers. His actual save percentage compares favorably to what has been expected of him. He is a quality goaltender.

The only hiccup Grubauer has, and it really hasn't been his fault, is he has a limited sample in the league despite playing in the NHL for nine seasons. The first six years of his career he was a backup gradually earning more playing time. We haven’t really had a good look at Grubauer and how he can handle a full season workload because the last two years were screwed up due to COVID. He did play 40 out of the 53 games this season and was strong throughout, but it was a career high in games played. He has never played 50-55 games. That said, it is easier to overlook things like that when his entire playing career at the NHL level has been as strong as it has been.

I don’t think Grubauer will actually make it to market, but if he does he brings with him a great resume.