Wanna blog? Start your own hockey blog with My HockeyBuzz. Register for free today!
Evgeni Malkin has had a rough start to the year. We know it, the team knows it, and most importantly he knows it. He still does not have a goal at 5v5 and he has been guilty of incredibly brainless turnovers this year. He looks off. With all off that said I am here to say there is light at the end of the tunnel. Despite all of it there is some underlying hope. Teams don’t win on expected goals they need tangible offense, but the tangible offense usually comes along for the ride when you are talking about players as gifted as Malkin. When Malkin is on the ice the Penguins have done better than a lot of us think. 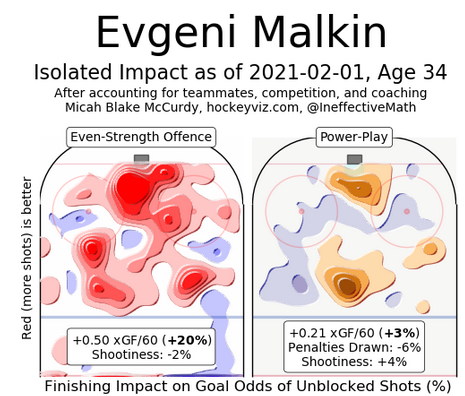 The +20% is way higher than I would have thought. It is good to have this information because our eyes would be telling us something like -20%. This shows he is not washed and things will probably turn around. You would think the other Penguins star without a 5v5 goal would have a better isolated impact on the offense. Sidney Crosby hasn’t ‘looked’ bad like Malkin 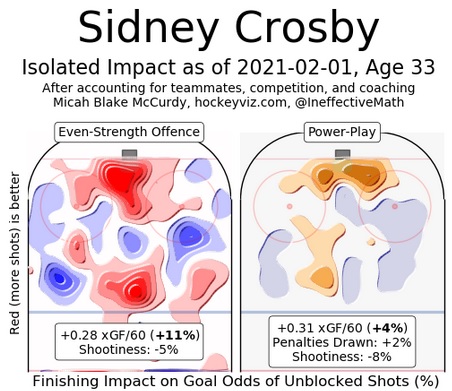 He’s lower than Malkin, but still very good. He deserves a 5v5 goal just like Malkin does. Neither has one. The good news is that this isn’t going to stay on round number for much longer for either player. It can’t because the bottom six isn’t likely to save the day. Here are the other isolated offensive numbers for the Penguins forwards:

It is not a well-oiled offensive machine that is for sure.

Some of the numbers may be surprising like seeing Jason Zucker at -3%. He has three goals in the last four games. You have to remember the information is looking holistically at the shot locations and expected goals from those locations. Hockey is full of variance and randomness. This is only a ten game sample which cranks that up even more. Brandon Tanev is a team low -10%, but has three(!) goals. The -10% is saying not to expect a lot of offense out of him. Not that it will be zero. Likewise, the model is shouting that Malkin will get his head out of his you know what as far as tangible offense is concerned. Nothing here is all that surprising. We knew the bottom six wasn’t offensively gifted. We knew the top six would have to carry the team. At least there are some underlying numbers that the big three (87,71, 59) still might be able to.

The Penguins will finally be back in action tonight against the New York Islanders. Both teams have yet to play each other this year. Currently the Islanders occupy the bottom spot in the division with eight standings points, but it isn’t dire. They have played nine games and the Penguins, who have played ten games and have 11 standings points, are sitting in the fourth spot in the division.

So while the Islanders are still OK in the standings it might not stay that way if they keep playing the way they are. 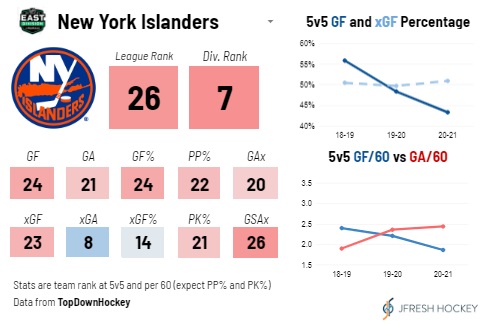 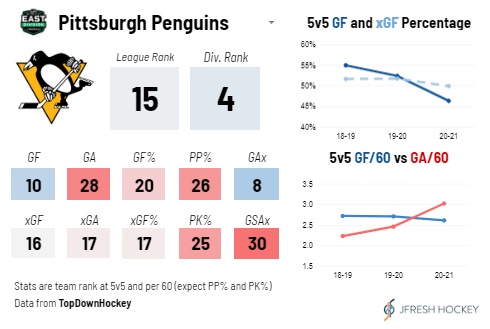 Most would agree the Penguins have underwhelmed offensively this year, but it still hasn’t been as bad as the Islanders

Helping the cause for the Penguins this evening will be the likely return of three defensemen. Kris Letang, John Marino, and Mike Matheson should be available as they all practiced yesterday. Zach Aston-Reese’s return is around the corner as well, although the team recalled Drew O’Connor from the taxi squad today so Aston-Reese might have to wait to see game action.

Maybe Tom Fitzgerald won’t want to be GM off the Devils or the Penguins after this stretch of hockey.

Join the Discussion: » 268 Comments » Post New Comment
More from Ryan Wilson
» Penguins look lost against the Islanders
» McCann he get it going?
» Penguins need to avoid self-owning themselves this time
» Teddy or not Blueger might have to play in the top six
» Capitals shaking up the lines for tonight's game