It was announced that the salary cap would remain flat for the next two seasons with a 1 million dollar increase in the 3rd year.

This is not great news for many teams around the league.

It's not great for players who are on expiring deals either.

Below, you will see how the Hawks will look within this new cap world.

I have made some overall assumptions, as well as, player assumptions specific for the Blackhawks. I will outline all of this but there will also be some room for a healthy discussion afterward.

Let's get into it:

* This is more of a theory rather than an assumption, but I'm thinking that players will be forced to take lesser term and money as there will be less to go around. You should see a lot of 2 and 3-year deals this summer. Building off of this theory, you may see fringe/role players (Blackhawks examples: Drake Caggiula, Slater Koekkoek, etc.) take much less just to stay in the league where the are comfortable.

* Another theory/assumption, cap space will be even more of premium, therefore "dumping" players to teams will be more difficult. So my prediction that Olli Maatta and his $4.1M would be able to sent to another team is far-fetched now. More player for player, "change of scenery" trades will be more frequent.

Here is where the Stan Bowman sits today as he reviews the Blackhawks salary cap.


Next year (2020-21), will obviously be difficult to maneuver but not impossible.

The biggest obstacle is that Bowman has $45.8M tied up in just 6 players.

Let's see how next season could look. 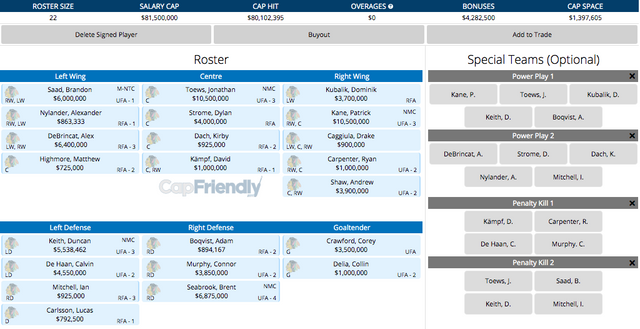 See what I did with next year's team? Yep, not much.

Before this pandemic and the news of a flat cap, I didn't think that the Hawks would do much in terms of bringing in new blood.

The claim that the Hawks are looking to get younger and more innovative is, in my opinion mostly of out necessity. Once you review the below, you may agree.

In the above, I have bought out both Zach Smith and Olli Maatta. While I would have liked to keep Maatta, a $4M bottom-pairing dman is too much money in this new reality. Plus, as you can see, the Hawks have the next wave of defenders in Chicago; Boqvist is already here, Mitchell is on the team next year in my eyes, and I really like what I saw out of Carlsson.

Based on the above, I have opted not to resign Koekkoek even though I think he's a useful 6th-7th dman.

Drake Caggiula settled for $900k for 1 year and if he doesn't, come on down Brandon Hagel to take your spot.

Lastly, Corey Crawford is happy to stay in Chicago during this time with a $3.5M AAV over 3 years. Yes, it's 1 year too long, and at 35 years old it's probably not ideal, however, if Collin Delia (and/or Kevin Lankinen) can grow into a consistent 1B option or even starter material over the next couple of years then that would be a successful tandem.

I like Delia a lot and think he's ready for backup duties next year and at $4.5M combined for both goalies that would be a recipe for success in terms of allocating to areas of need/necessity with the cap.

I have left $1.3M+ for cap space as a buffer. If Bowman is to make any big moves, it may have to come in-season. He's accustom to that.

The main theme is uncertainty with my roster above, but I'm not as much worried about the younger, unproven players but the older, more injury-prone guys.

How is Seabrook going to bounce back from multiple serious surgeries?

Will Andrew Shaw ever play again?

There is just as much potential as there is disaster with the team above, therefore Stan must leave a little cap space to play with.

Now how does the team look?

Well, I don't think it'll look a whole lot different, to be honest.

Without making any big trades (which could happen) or big UFA signings, here's where I'm at: 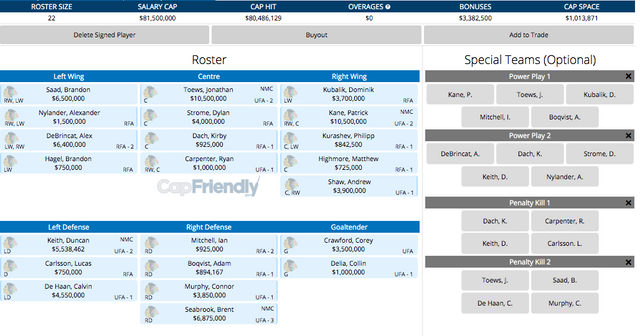 However, boring might be exactly what the Hawks need right now because boring means the younger players have started to pull their weight.

Kirby Dach, Adam Boqvist, and Ian Mitchell have turned into more impact players in this 2021-22 season and Philipp Kurashev, Brandon Hagel, and Lucas Carlsson have become every day, effective players.

I have opted not to resign David Kampf (I hear some cheers) and Drake Caggiula, as the Hawks will be hard-pressed to keep him around if he is looking for a $1.2-$2M AAV.

I have assumed Alex Nylander has been progressing and given him a 2 year, $1.5M AAV, and Brandon Hagel signs in with a league-minimum $750k for 2 years as well on his first one-way deal.

Other than those smaller deals, the big elephant in the room is Brandon Saad.

He is a guy that the Hawks could resign for less than he would have asked for in a "normal" world.

I have signed him to a 4 year, $6.5M AAV. So a slight bump from his current contract and a deal that takes him to 33 years old. He'll still be able to sign another deal while he lives a stable life in Chicago.

Theo just wrote about playing like Marian Hossa in our last blog and Brandon Saad is a guy you want to keep because he plays as close to Hossa than many Hawks.

As you can see, the Hawks don't need a big entry from a prospect waiting in the wings.

Kurashev has been inserted into a 3rd line role, however, I could easily see that being Barratt's spot or even Entwistle.

What they need in this year are the guys like Dach, Boqvist, Mitchell, and Nylander to take big leaps, while Toews, Kane, DeBrincat, Saad, Strome, and Keith to remain to be really strong contributors.

Let's also hope the goaltenders have found a good rhythm. Here's hoping Delia (or Lankinen) are starting to steal some games away from Crawford.

I have no doubt Crow can keep playing at a high-level in this 2021-22 season, but the future needs to emerge at this time.

My money is on Delia to step up, but who knows? I wouldn't be shocked if it was an outside signing or trade that brought in to take over for Crawford.

If the Hawks were to draft goalie phenom, Yaroslav Askarov this year, then he could very well be ready by this time.

Speaking of the draft I have no idea who the Hawks will take this year or next year, so they have not been factored in.

If the Hawks are to stay in the 9th/10th spot, they could find themselves with someone like Anton Lundell, Jack Quinn, Dawson Mercer, etc. Currently, Wiz has Jack Quick going to CHI in the 9th spot, but obviously, draft order is still TBD. Heck, my lineups could have Alexis Lafreniere on Patrick Kane's line next year should the Hawks win the lottery.

Overall, I can't see there being too much movement in 2021-22 unless it involves trading in-season.

As you can see I have Andrew Shaw on the outside looking in on both lineups as I don't think he will be returning. I hope he does as a healthy human, as he's more valuable at $3.9M in the lineup in the top 9 than he is eating up space on the LTIR and the Hawks having to navigate his contract heading into each season.

Yay, a $1M increase. That should really help some teams.

The Hawks currently only have 5 players signed into 2022-23 and that's Toews, Kane, Keith, Seabrook, and DeBrincat for a total of $39.8M.

There would be some big deals coming up at this time that could throw a wrench into everything like Kirby Dach and Adam Boqvist's deals coming out of their entry-level contracts.

Nicolas Beaudin and Matthew Highmore would be up but shouldn't cost much if they are still with the team.

Connor Murphy is the really interesting one. He's so valuable to this Hawks team but with the number of RHD – primarily Mitchell and Boqvist – who should be prominent top 4 dman by this time, Murphy might be expendable.

Calvin de Haan's deal will be up this summer as well and with his injury issues, I doubt he'll be retained. Who knows though, maybe he has a robotic shoulder by then.

Ryan Carpenter's deal will be up at this time as well. Good chance he's not resigned.

Andrew Shaw will be off the books as well. He may be half-retired by then and if not, I can't see him being back with Chicago if he is relatively healthy.

In net, both Delia and Lankinen will be UFAs. This could pose an interesting decision between the pipes depending on how it all transpires.

As I said, 2022-23 is too far away to make any clear predictions but salary cap help will be on the way with guys like Shaw, de Haan, and (potentially) Murphy coming off the books.

In conclusion, who the heck knows what's going to happen? It sure is fun to talk about it though.

You'll notice I have not taken into account the Seattle expansion draft as I have no idea who will be taken at this time.

Also, as mentioned above, I have not factored in any entry draft selections either.

Who knows, maybe there's a wild card signing or Max Shalunov finally comes over and tears it up in Chicago.

All I know is that there is going to be a lot of penny-pinching happening and the Hawks will be a team that will have to get creative.

I would expect to see the youth in full effect the next couple of years. And that might be the best thing for this team right now.