Now with the season officially over in Blackhawks-land, I wanted to take a glance forward to see how this offseason could play out for Stan Bowman and Co.

Last week, I asked for your questions for a mailbag edition and boilermaker100 asked this one:

Get out your crystal ball and predict what the Hawk team will look like next season. To me there are so many concerns and uncertainties to address during this abbreviated offseason. The defensive system that Colliton insists on playing that has given up so many High Danger Scoring Chances the past two seasons (don't tell me that another training camp will fix that), the health of Seabrook and Shaw, lack of top 9 forwards and their inconsistent play, and regression of play by Strome, Debrincat and Boqvist to name a few.

Do you think they would bring back basically the same team by extending Strome, Kubalik, Crawford and Caggiula to reasonable contracts, possibly buy out Smith and offload some salary (Maatta or de Haan?) to meet the cap, and bring in a couple of new guys like Suter and Mitchell. Unless the stars align and the defensive system gels, Strome and Debrincat revert to their 2018-2019 selves, Kubalik shows he isn't a one year wonder, Nylander and Boqvist up their games, and Crawford plays at a high level, I don't think the team will make the playoffs.

Or do you think that there will be a greater turnover in personnel and the beginning of a more serious rebuild instead of tinkering around the edges? That, of course, won't guarantee a playoff spot, but why continue along the same path as the past few years. What's that definition of insanity? Keep doing the same thing over and over and expecting a different result?

There was so much to unpack here and it's exciting to look ahead, so I parked this conversation and wanted to dedicate a blog to offer my thoughts.

First, I will preface by saying what I always say because this is a very preliminary look at the Hawks, things can (and will change) and I reserve the right to change my opinion at any point.

I will begin to answer the key questions and comments boilermaker100 has asked as I reveal what I think will happen this offseason:

* Colliton's defensive system – This is a tricky one – is it the system or the personnel? Well, around November last year, someone in the Hawks management believed it was Colliton and his system that was the problem and asked him to tweak. Since then, they were better but still a massive work in progress.

Ok, I can buy that to a certain degree, but there needs to be some personnel changes as well in my opinion. The problem is – as you will see throughout this blog – there's not a lot of opportunity for big sweeping changes.

So if the roster isn't going to change much and Colliton is going to role out essentially the same system, my suggestion to the Blackhawks is to bring in a more experienced Associate Coach to run the defencemen. I like Sheldon Brookbank but I would send him back to Rockford to continue to grow as a coach there and bring in someone with more pedigree; someone who can speak one-on-one with the dmen to keep them grounded, as well as teach them a couple of tricks along the way. Could the Hawks convince former defenceman, Illinois native, and recently fired Todd Reirden to join the staff on as an assistant coach? It's a long shot but Stan and Jeremy should at least have a conversation with him.


* The health of Seabrook and Shaw – This is a big one. The Hawks witnessed first-hand what real depth looked like with the Vegas Golden Knights. If I'm Stan, I'm going into next season with big question marks over these guys.

I would want to make sure you have strong replacement in the event that neither of these guys (or other injury-prone guys like de Haan) gets hurt or can't play to the level you need.

Depth, depth, and more depth… that's the only solution here.


* Lack of top 9 forwards – I think Stan has addressed this slightly with the addition of Pius Suter. Will there be more? Who knows, but if Hawks need to see growth and more consistency from guys like DeBrincat and Strome, they may be fine if Dach and Kubalik continue to grow.


* Can the Hawks bring back the same team and fit it under the cap (while being successful at the same time)? – I did an exercise on CapFriendly and brought everyone back except for Caggiula, bought out Smith and Maatta, and got the Hawks under the $81.5M cap. So it is possible. Are they a better team? No. Could they make the playoffs with this team? Maaayybbbe. It's going to be tight regardless.

Usually, the gap between what I think is going to happen and what should happen is larger for me, but this year with the cap constraints and the tricky situation the Hawks are in, it's not as wide.

Here are the highlights of what I think could happen:

I, unfortunately, didn't have room to sign Drake Caggiula. I really want to see him back, however, even at $1.5M (which is his qualifying offer), it will be tough.

The above contracts are best guesses only and could go up and down. What do you think?

I think Strome is destined for a 1-year. Kubalik may opt to go for a 1-year deal as well as he will be a UFA in 2021-22. My thinking is though, he'll take the guarantee of that contract considering the flat salary cap and teams may not have $5-7M AAV lying around for him next summer even after another strong year.

Koekkoek has been a fringe player his entire NHL career, so he stays at $1M where he's comfortable and will most likely play regularly.

Corey Crawford is the priority, however, I am confident he will be back in Chicago next year. I have him at $4M AAV, but that could go as low as $3.5M or as high as $4.5M as I see it.

The X-Factor is if any of these players prove to be difficult to sign. If Crawford wants $5-6M, then the Hawks will need to let him go, unfortunately. Then Stan will need to get creative.

Kubalik and Strome may want more as well which may force Stan's hand.

Even if it plays out as I have listed above, I do think Stan Bowman has at least one trade up his sleeve.

I have made one deal to round out the Hawks for next year.

I believe Olli Maatta's stock has gone up a bit but not enough to move him for nothing/cap space.

I think there is a market to move him if there is a contract coming back. This is why I have dealt him:

Wood, 24, has $2.75M AAV for a couple more years (contract expires 2022 when he will still be an RFA) and will add a little size to the lineup that the Hawks should be looking for.

Maatta to the Devils makes sense on a couple of levels as they could use the help on the blueline, and their GM, Tom Fitzgerald knows Olli well as he was with the Penguins organization from 2009-15.

I'm not setting this trade in stone, but I see a move "like this" happening. Feel free to replace Miles Wood with Nick Paul (OTT) or Nicolas Deslauriers (ANA).

Maybe there are no takers for Maatta and then at that point, the Hawks will simply buy him out. Yes, I know he had a strong playoff, but his contract makes the most sense. 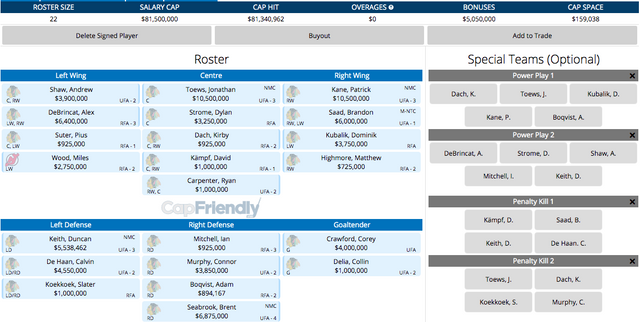 Boring, I know, but I don't expect many big changes.

The Hawks don't have much for savings, so maybe Lankinen gets the job over Delia to save another $200k. I have stashed Nylander in Rockford (which I don't think will happen), as I didn't have many other options and I always struggle to find a spot for that guy in the lineup.

What do you think? Am I way off here? Do you think the Hawks make bigger changes?

Let me know on the message boards.