First and foremost, I want to virtually check in on all of you.

How is everyone doing? Are you self-isolating? If not… you should be.

This is serious and the best way for us to curve this thing is to shut it down, practice social distancing and wash ya damn hands… a lot!

Captain Serious is getting serious with this donation:

It is amazing to see Toews stepping up like this.

Now, let's move on to our 2nd edition of Blackhawks Armchair GMing. This week features DOH!'s lineup and see what he would do as your GM: 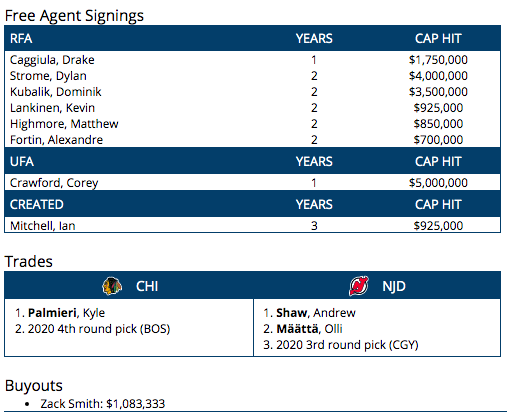 I think the buyout of Zach Smith is going to be a universal theme for many. He and Olli Maatta are very buyout-able in terms of how their contract is set up.

Even though the Hawks aren't fond of the buyout method, depending on where the salary cap nets out after this COVID-19 readjustment, they might not have any other option.

In terms of signings, DOH! Was able to negotiate:

* Drake Caggiula for 1 year at 1.75M AAV – I think this is a little high for The Drake, however, at 1-year, it's digestible if they can fit him under the cap.

* Dylan Strome for 2 years at $4M – I like this deal a lot for both parties. I have a sense that Strome might be looking for more, however, he might be tempted to accept if he can play alongside his bestie.

* Dominik Kubalik for 2 years at $3.5M – a nice bridge deal for the Hawks but might be too low for the Kubalik camp.

* Kevin Lankinen for 2 years at $925k – While I like Delia more at this time as a backup, I like this move and could see Lankinen stealing a spot out of camp.

* Alex Fortin for 2 years at $700k – Yep, Fortin has proven himself to be quite valuable as a defensive/PK forward in the AHL, so I like resigning him as insurance.

* Ian Mitchell for 3 years at $925k – A standard entry-level contract is the path for Mitchell and the silver lining to this pandemic is that even if the NHL was to resume, it looks like NCAA players won't be able to join their respected teams. That could change, but it looks like if the Hawks sign Mitchell, his contract would kick in next year vs. him burning a year off his deal this year (which the Hawks would surely have done to get him to sign).

DOH!'s trading partner is New Jersey. He has sent Andrew Shaw, Olli Maatta and the 3rd round pick acquired from CAL in the Gustafsson deal, for Kyle Palmieri and a 4th round pick.

I personally think NJ says no to this deal.

They like Palmieri a lot and they didn't move him at the deadline as they didn't receive the offer they liked.

I understand dumping Shaw and Maatta's contract (along with a 3rd) from Chicago's perspective, but I think the Devils will see this as just that… a dump.

If I wanted to actualize this from my GM brain, I would say if the Devils were to accept Shaw and Maatta, yes they need to send salary back, but I think it's more from an area of guys they actually don't want or shed themselves.

NJ will have a lot of cap space so they won't need to fully match the $8M salaries from Shaw and Maatta but I could see a guy like Miles Wood ($2.75M until 2022) coming back.

Wood is a guy with speed and size that would benefit from a new environment.

However, I digress, I think a Palmieri deal is possible so we're sticking with DOH!'s plan.

As for the forwards, I think he's on to something by adding a talented offensive player like Palmieri, that's what the Hawks should be looking at heading into the offseason.

The key in his lines above would be Nylander working out as a productive top 6 forward. I think he can get there, but I do have reservations as well.

On the backend, if the Hawks are losing Maatta, I think having Boqvist, Mitchell, and Beaudin all in the lineup at the same time is a recipe for mediocrity just due to their lack of experience.

I agree, shedding Maatta's contract is a reality, however, even at 25 years old (26 in August), he's a strong veteran presence.

Seabrook's return might be a factor in all of this, but I could see Koekkoek being resigned with the potential health issues that Seabs and de Haan offer on the backend.

In net, I would be ok with Crawford with Lankinen and/or Delia backing up next year.

Overall, good job staying under the salary cap and getting some key players resigned, DOH!

Honestly, it may not look like DOH! did much, but this is a realistic look at what Stan might do this offseason. There's a good chance a very similar team is brought back fro 2020-21.

Don't agree and if you think you can do better then him? Go ahead… send me your teams. I will have the 3rd edition next Friday.


Stay safe and see ya out there!