Wanna blog? Start your own hockey blog with My HockeyBuzz. Register for free today!
Jim Rutherford and the Pittsburgh Penguins are still after Minnesota Wild forward Jason Zucker.

1. As the all-star break begins and teams go through their scouting meetings, a few teams with interesting possibilities are waiting on upcoming performance to decide their path. Included in that group are Chicago, Minnesota, Montreal and the Rangers (back-to-back with Detroit when they return). Those teams will test the value of their players, but hold off on final decisions until closer to the deadline — unless they become convinced they’re out. Pittsburgh continues its pursuit of Jason Zucker, but the Wild aren’t yet ready to concede anything. Nothing is happening with the Blackhawks as long as they’re still in the race, but if they fall out, would Joel Quenneville ask to pitch ageless physical specimen Duncan Keith on the virtues of southeast Florida?

This should not be any surprise. Rutherford literally traded for Jason Zucker over the summer. It was Phil Kessel, who exercised his no trade clause, who nixed the deal. The Penguins clearly like Zucker’s versatility. He is signed for three more years at an AAV of 5.5M. The Penguins could certainly make the money work if they wanted to. They have players like Nick Bjugstad and Justin Schultz who combine for a shade under 10M. The real cost will be what the team has to give up to acquire his services. Bill Guerin should have a great understanding of the Penguins assets. There are two main questions. What kind of player (style) is he looking for? Is he going to continue to prop up the illusion the Wild are trying to contend? Is Nick Bjugstad someone he helped acquire in Pittsburgh? Could Patric Hornqvist’s name pop up? I know this, when Rutherford gets fixated on a player he is going to be consistent in his pursuit. 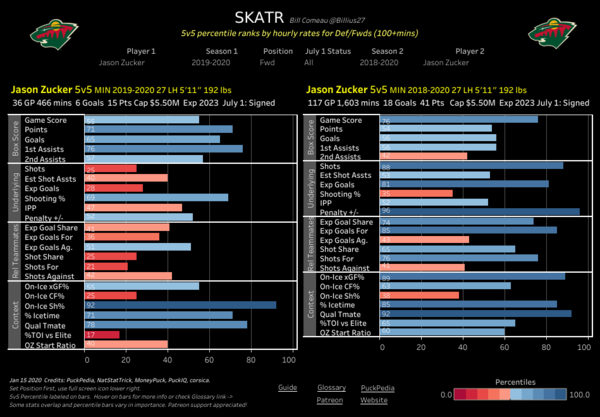 This year isn’t great, but he’s been better in the past as the right hand side shows. He’s 28 years old so he will still be productive although his better years are likely behind him. His age lines up with the Penguins window to compete for a championship.

Now if Bill Guerin plays hardball and a deal cannot be done I will again bring up Mikael Granlund as a rental option who checks off similar boxes to Zucker. They are both versatile in the positions they play and the situations they are able to play in. 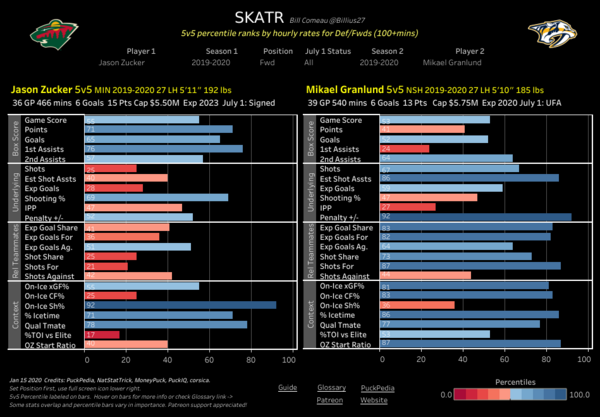 Gear up for Zucker rumors. I don’t think this one is going away.