There were a lot of emotions sprinkled throughout the UC on Tuesday night.

Joel Quenneville's entrance into the building as he was mobbed by the press was just the start. Then the Hawks paid tribute to Patrick Kane for his milestone of reaching 1,000 points. It was quite cool to see Coach Q's reaction to that ceremony.

Then, the Hawks faithful gave an outstanding cheer to their former moustached bench boss.

At the end of the night, the Hawks lose this game 4-3.

For all of the eventful, emotional stuff to start the game, the game itself was very uneventful. Both teams were feeling each other out and the first period was quite dull.

The Hawks and Panthers traded chances after that and unfortunately, Robin Lehner wasn't at his best. The Panthers jumped out to a 3-goal lead with a couple of goals in there Lehner normally stops.

There were a couple of highlights though with the birthday boy, Kirby Dach scoring a nice backhand goal. He had a strong game overall as he also set up Patrick Kane for their 3rd goal.

Oh well, the Hawks head into their 10-game break still playing at a high level.

As per the title teases and I've outlined above, Tuesday was an eventful day.

There was a dust-up in practice:

A skirmish went down at optional morning skate between Duncan Keith and Jonathan Toews.

After practice, Toews chalked it up to "just a little friendly wrestling" and Jeremy Colliton smiled and asked if anyone had brother. #Blackhawks @fox32news @foxkickoff pic.twitter.com/VCuisKeyrt

And there was a duster that graced us with its presence: 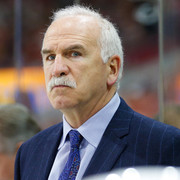 It was so great to see Coach Q back in the United Centre. A well-deserved and expected ovation for Quenneville; the Blackhawks team does an amazing job with these videos:

Here's the full video of Joel Quenneville's tribute in his return to Chicago. #Blackhawks pic.twitter.com/GRB8Zj1TRV

Circling back to the Toews and Keith "friendly wrestling match" earlier Tuesday at practice, I wouldn't read too much into it. These two have spent so much time together they must be like a married couple by now.

Stuff like this happens more than we see, this just happened to be caught on camera. Nothing to see here though… moving on.

One roster moves to note – Dennis Gilbert and Brandon Hagel were sent back to Rockford to get some games in as the Hawks are on their break. It will be good for both to get back into action.

We'll see if Hagel returns as Strome should likely be back after this layoff.

Since the Hawks will have some time off and I won't have any game coverage to write about, why don't we do a Friday Mailbag?

Send your questions my way via on the message boards, DM or on Twitter - @TylerTyping.

What should the Hawks do at the deadline? What will this team look like next year? You know, that kind of stuff.

Sorry, one last Quenneville video; Charlie sums it up nicely:

Joel Quenneville reuniting with his Chicago guys will hit you right in the feels. #Blackhawks pic.twitter.com/2gMOJLGAcL

See ya out there!