Wanna blog? Start your own hockey blog with My HockeyBuzz. Register for free today!
There aren't too many sure things about the Penguins forward lineup. Mike Sullivan has a plethora of options to construct his lines however he sees fit. He has a number of players at the moment who can play multiple positions such as: Jake Guentzel, Alex Galchenyuk, Bryan Rust, Nick Bjugstad, Dominik Kahun, Brandon Tanev, and Jared McCann. Even with those options there is one sure thing, or at least there should be. Playing Jake Guentzel with Sidney Crosby.

Guentzel is starting a brand new contract this year that will pay him an AAV of 6M. I do think Jake Guentzel is a skilled goal scorer. I think the way he views the ice is a strength. I think he's a good and clever passer. All good strengths. However, we do have to consider the Crosby effect in play. Since Guentzel has joined the Penguins full-time he has played 2,088 minutes at 5v5 with Crosby and 874 without. The 874 minutes isn't an insignificant sample. There is something to be had with 800+ minutes so here is how things went 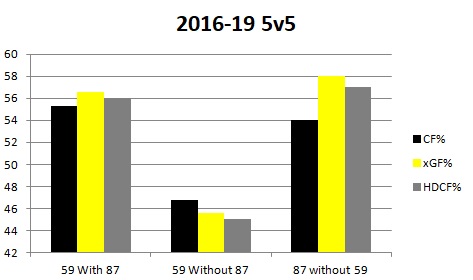 To put things in basic terms Crosby does not seem to be impacted significantly in these particular categories with or without Guentzel. For Guentzel things get pretty bad without Sid alongside him. We are talking ~10% drops which is a lot. Guentzel has been a 16.3% shooter in his 204 NHL games which is really good. He knows how to find soft spots in the offensive zone and he knows how to finish, with Crosby. When those high danger chances dry up away from Crosby this will pose a problem. That 40 goal season becomes an aberration and not the standard. Paying him 6M to be a 20-25 goal guy isn't the plan here.

Mind you the next graph is only a 176 minute sample from last year, but it isn't encouraging. Here is Guentzel's defensive contributions when Sidney Crosby is not on the ice with him 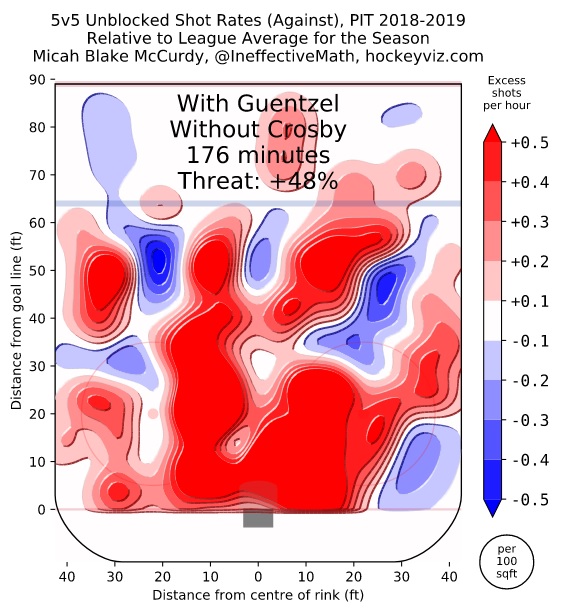 YIKES! It looks like a crime scene and it is as far as defensive hockey graphs go. With Crosby the number is a very respectable -8% with a 1,103 minute sample. In 2017-18 Guentzel played 478 minutes without Crosby and was a +26% defensively so still not good. Offensively Guentzel can still put up OK number according to these charts without Crosby (+18% in 2017-18 and +26% in 2018-19) but the defensive woes cancel out any gains. In the case of 2018-19 it is a complete bloodbath without Sid. For all the hating on Phil Kessel and his defensive woes they weren't anything like the Guentzel without Crosby numbers. Kessel was a +8% last year when he was on the ice overall. Take Johnson away from him he was actually league average.

If Mike Sullivan does go a different direction and plays Guentzel with somebody other than Crosby it is still likely Guentzel will get a promotion to the top power play on a full-time basis this year. He wrestled quite a number of minutes away from Patric Hornqvist last year and that was before Phil Kessel left a vacant forward position on the first unit. Guentzel will get some Crosby time this year on the power play alone. Even with the power play it is still imperative that Mike Sullivan gives Guentzel as much time as possible with Crosby at 5v5. They made the serious investment of 6M per year and they need to maximize their investment. We've seen what happened to Evgeni Malkin when they just wanted him to do things all by himself and Guentzel is nowhere close to being as good as Malkin.

It is the coach's job to set players up for success and play to their strengths. With all the options Mike Sullivan has is shouldn't be hard to make that happen for the most important players, Guentzel being one of them.