Wanna blog? Start your own hockey blog with My HockeyBuzz. Register for free today!
MNWild On the Heels of a Complete Meltdown Wild to Face Bruins 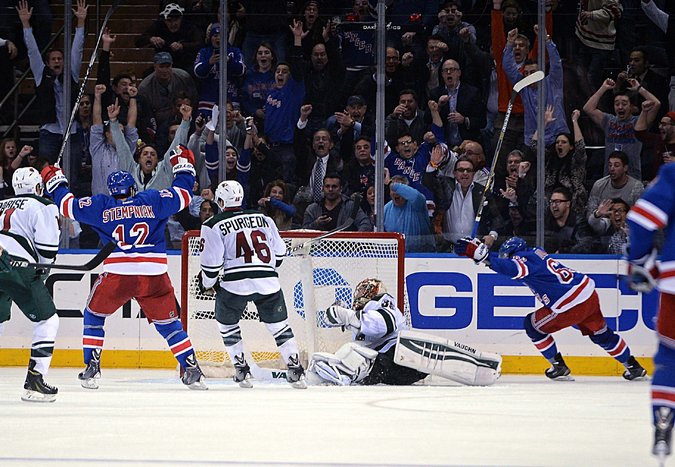 I honestly have zero clue how that game went from 3-0 Minnesota Wild to a costly embarrassment of a loss 5-4 to the New York Rangers. Lots of blame to go around and HOPEFULLY a very early lesson that can be used as motivation to put 60 mins worth of energy and effort together consistently.

Kinda time to be done laughing off this NEWLY implemented Andrew Brunette lead power play being 0-Fer the 2014-15 NHL season. This team doesn't have the huge national superstar types that accumulate the light calls from the zebras either. It is a MAJOR problem that this team seems to have very few players able to switch on their predatory shooter mentality and be loaded up to let fly once the puck is headed their direction.

The fact that Wild Head Coach Mike Yeo has yet to break up his "Old" power play and "Young" power play units drives me up the wall. The fact is Mikael Granlund is the most gifted passer/playmaker on the team and should be the primary distributor for the top powerplay featuring Zach Parise, Thomas Vanek, Jason Pominville, and Ryan Suter. The issue with that group though is Pominville is a liability playing the other point and handling the puck when pressured.

As we saw in the first Avalanche game this group(Minus Vanek) was productive and dynamic keeping the puck moving below the dots. Suter and Pominville hesitate and avoid nearly at all cost shooting the puck from the blue line anyways. That second powerplay group should be focused around Koivu dealing the puck from behind the net and the young talented forwards crashing the net like Nino Niederreiter, Charlie Coyle and Jason Zucker. Jared Spurgeon who has been playing as well this year as he was last season, gives the Wild another capable and willing shooter who has been under utilized on the power play this year.

Brunette is beloved here as a player scoring the most memorable goal in franchise history but he has yet to do much to impress running a power play that has yet to find pay dirt. It is time to balance out the skill sets and empower the young players in units with the veterans. I also believe that for Mathew Dumba to make an impact playing 3rd pairing minutes he MUST be contributing on the power play and shooting the puck. Dumba's skill set is a huge mismatch if he is playing aggressively with the puck on his stick and putting pressure on the opponents activating himself and getting deep in the zone just like we have seen from Spurgeon.


Koivu and Vanek High Expectations Together of Production Setup for Failure? I think the combination of Kaptain Koivu and Thomas Vanek is a very potent pairing but it requires either one of two this to occur for it to truly flourish here in the 'State of Hockey' this season. The first option would be to add a player to the other wing with these veterans capable of using their speed to enter the zone and pressure defensemen into turnovers and losing puck battles. The players I have in mind are Zucker and Niederreiter.

Vanek and Koivu have shown very strong chemistry with each other passing the puck but neither has distinguished himself as a #1 option offensively with both passing on shooting the puck frequently already this season. If Yeo insists on playing complimentary guys like Coyle, Cooke, and Fontaine on the wing opposite his other 2nd liners, than Koivu and Vanek have to shoot the puck 1000% more than they have so far.

It is such a Minnesota sports problem to have these uniquely talented sports athletes on our team being TOO unselfish to the point it is costing the team victories. Koivu and Vanek have to be made to see they are wasting opportunities and ice time by playing this cutesy make the extra pass brand of hockey. Get Better to These Guys! Nasty Virus They are Battling Both Placed on IR!

Rangers defenseman John Moore has also been ejected for this elbow to the head of Erik Haula. http://t.co/FqQUKBEjrA https://t.co/2BVOl0bkcQ

That's all for now thanks for reading!

Join the Discussion: » 46 Comments » Post New Comment
More from Tony Dean
» Hopefully Absence Makes the Heart Grow Fonder Wild State of Affairs
» Wild Looking to Bounce Back from Loss Hosting Edmonton Oilers at the X
» With Ducks on Deck Yeo's Club Must Show Ability to Punch Back
» Game Night at The X Plus Listen to WildWednesdayShow Between Periods
» After Five Games More Questions Than Answer for Yeo's Wild Squad