Wanna blog? Start your own hockey blog with My HockeyBuzz. Register for free today!
The Pittsburgh Penguins should be very thankful for Evan Rodrigues and what is looking like his career year. Rodrigues added his seventh goal of the year in the Penguins 4-1 victory over the completely lost Vancouver Canucks. He is on pace for a career high in goals (30) and points (60). His prior highs were nine goals and 29 points with the Buffalo Sabres in 2018-19.

It isn’t just box score stats with Rodrigues this year. Among Penguins with 150 minutes played this year he leads all Penguins with an xGF% of 65.71. When you compare him to the rest of the league there is only one player with a better xGF% and it is Auston Matthews at 65.80. 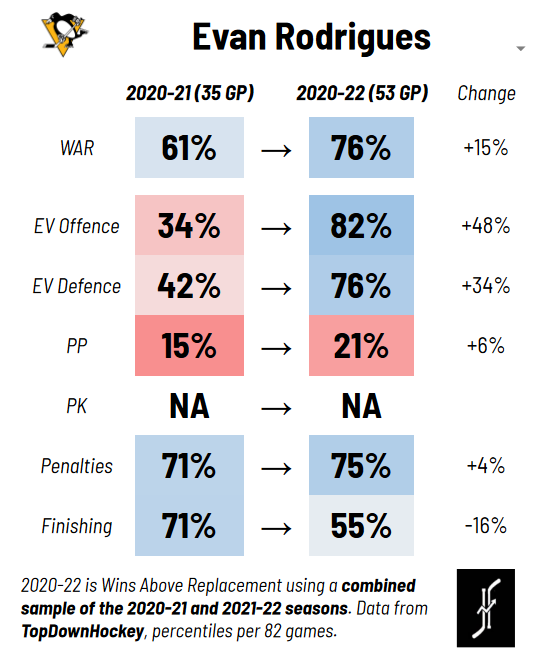 As a result Rodrigues’ confidence is high and who could blame him. He’s playing amazing. His goal was dripping with said confidence last night.

He’s trying to make plays and he is. So many times when you get relegated to a minimal bottom six role you lose your drive to create. The plays become unspired and basic because you can’t afford mistakes or you risk being tossed from the lineup altogether. Rodrigues is not playing like that. He is playing like someone who wants to create instead of somebody who just wants to get by and survive

The Pittsburgh Penguins desperately needed to catch a break like this. The roster in recent seasons seemed to be built with depth players who had defense in mind while offensively everything was a bonus and not a feature. There are no difference makers coming up from WB/S to save the day like Jake Guentzel and Bryan Rust did. The team really had to depend on above average goaltending to overcome the weaker depth scoring. We all know how that has played out.

Having Evan Rodrigues break out like this is is the kind of thing that can open the contending window a sliver. It isn’t going to be enough on its own for sure and the odds still aren’t great, but this is the type of thing you need to happen if there’s going to be a chance at all.

The Penguins underlying numbers this year despite never having a full lineup this year have been decent. Their finishing and power play, not so much 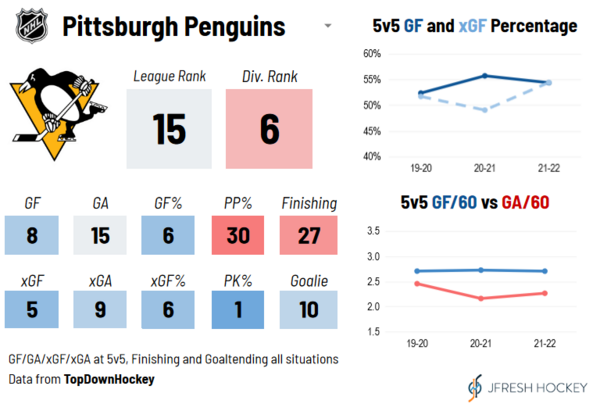 The good news is the Penguins don’t even have to make a trade to improve those areas. They just need Evgeni Malkin to get healthy and make a return to the lineup. A breakout season by Evan Rodrigues has bought the team some time and for that the Penguins should be thankful