Wanna blog? Start your own hockey blog with My HockeyBuzz. Register for free today!
Last night has the potential to be one of those games you look back at later in the season and say what if we just held on to that 3-0 lead. The Penguins suffered their worst loss of the season after blowing a three goal lead and allowing the Flyers to score four unanswered goals including the game winner late in the third period. The only thing missing was Danny Briere going offsides legally. 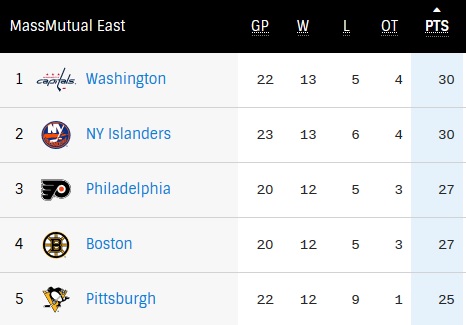 A win would have put the Penguins tied with the Bruins. A loss keeps them in the fifth spot with more games played than both Boston and Philadelphia. You can make up ground quick when all the games are within the division, but you have to win those games. You can’t toss away 3-0 leads to any team, especially to one of the teams you are chasing for the final playoff spot.

Tristan Jarry gets credit for being good at playing the puck, and he is, but there have been a couple of instances recently where he has played the puck and a goal against has immediately come after. The general lesson here is that even the goalies who are good at playing the puck should limit the times they do it because goalies aren’t that great at it relative to their teammates. Mike Matheson deserves a mention here, though. He needs to take off his oven mitts and put his hockey gloves back on. How can he do some of the positive things he does out there and then handle a puck like that? He’s struggled this week against the Flyers. While Matheson is on the ice the Penguins have been out attempted 21 to 43 the past two games.

Mark Friedman has had a great start to his Penguins career. He had an assist in his first game and scored his first career goal despite only playing 4:55 in the game last night. The low ice time was due to injury.


Penguins can either tie the Flyers with a regulation win on Saturday or remain behind them in the standings. The games will be coming fast and frequent in the month of March. The season could easily be lost or won in the upcoming stretch.