Wanna blog? Start your own hockey blog with My HockeyBuzz. Register for free today!
Be sure to like HockeyBuzz on facebook!


UPDATE - The waiver list is now including bother Travis Boyd and Adam Brooks, bringing the list of players down to 24.


The Toronto Maple Leafs trimmed their roster down to 26 players on Monday, but have some work to do to get under the $81.5 million salary cap and 23-man roster limit by Wednesday, when the club takes on the Montreal Canadiens in the home opener at Scotiabank Arena. 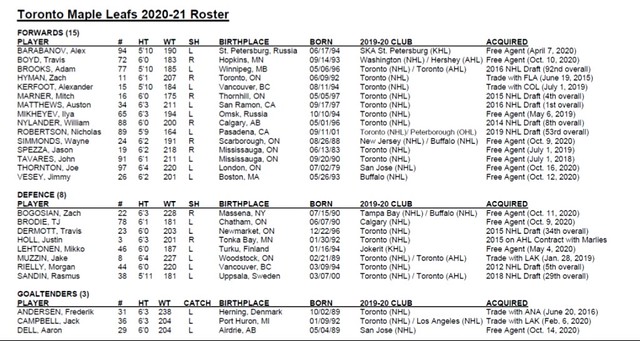 Toronto currently has 26 players(15 forwards, 8 defensemen, 3 goaltenders) and is likely holding back on their final cuts to improve the chances of being able to sneak players down to the minors without getting claimed by another NHL club.

Forwards Travis Boyd and Adam Brooks would have to clear waivers to be demoted, while KHL import Alexander Barabanov and rookie Nick Robertson are waiver exempt. On defense, either Mikko Lehtonen or sophomore Rasmus Sandin could be sent down without risk of being claimed.

GM Kyle Dubas thus far has chosen to keep three goalies in Frederik Andersen, Jack Campbell and Aaron Dell, likely because there are clubs such as the New Jersey Devils who are on the lookout for depth in goal after veteran Corey Crawford retired on the weekend.

An interesting, fun, scary season to come... enjoy it.

*******If you are interested in sponsorship or advertising your business in the Greater Toronto / Southern Ontario area on this column, please send a message for more information by clicking on the “Contact” button at the top of the page.*******