Wanna blog? Start your own hockey blog with My HockeyBuzz. Register for free today!
And so we have a game 7...

Admittedly, I haven't been watching the cup finals that closely - just not into either team.
But, regardless, a game seven is always a good time.

Who do you think is taking Lord Stanley home?

It's another slow week for news in the Kingdom. I'm guessing things will start picking up once the dust of the Cup Finals settles?

In the mean time, I've been checking in with the Kings SB Nation site, Jewels from the Crow, for some offseason rumblings.

They've been posting columns that break down potential targets for the upcoming draft. One of the most recent ones focuses on goaltending prospect, Spencer Knight.

It's not surprising to me that Jewels from the Crown are hypothesizing the idea of the Kings taking Spencer with their 22nd pick. I say that because of Rob Blake's comments about needing to rebuild the goaltending position, combined with the hype around Knight.

Knight has been linked to a number of teams and there's really no surprise when you look at his scouting reports and the flattering comments about his game.

While the article on Jewels from the Crown reiterates what most folks say about Knight, the thing I find odd is that he apparently doesn't seem to have any weaknesses. The JftC piece points to his only real "weakness" (or concern) being his focus - using an example of when he does not face a lot of shots, he has a tendency to be "slow to gear up."

This isn't really unique to Knight. It's actually something most goalies face in a game when the majority of the action is on the other side of the ice. If you polled a group of netminders, they'd probably all prefer to be in a game where they're facing steady shots, instead of seeing a shot every so often. Being peppered on a consistent basis keeps you physically and mentally in the game (emphasis on the latter part). it's a weird paradox, but there's nothing worse than facing a low amount of shots, because each one you do see then feels like it's the biggest shot of your life.

At 6'3" 193lbs, Knight fits the new age model of big, athletic goalie. Many reports point to his leg strength and impressive ability to move from post-to-post. That part of his game sounds pretty similarto Quick.

"Talented netminder who blends quickness and strong positioning. Size, athleticism and a strong pedigree. Isn’t shaken by a soft goal or bad outing – a great sign for the mental side of the position."

It's obvious Knight is very talented and has a well-developed mental game (which is so key to the position), so I'm really curious to see how he does at the next level.

Does anyone have anymore insight on him and/or have seen him play? I'd be curious to hear some analysis from those that have watched his trajectory. I've only watched highlights.

I came across an old Kings VHS that was uploaded to YouTube. It centered around their 25th anniversary and had some great, old footage in it. Some classic stuff from LA's past and the various legends that have worn purple ("Forum blue"), gold and black and white.

There were obviously some great mustaches/hair combos from over the years - real hockey guy stuff.

There was the classics like Rogie Vachon, Charlie Simmer, Bob Murdoch, etc. Then I spotted Gene Carr. Talk about a true '70s hockey beauty. Just take a look at his card below.

Gotta' be the influence for McConaughy's character in Dazed and Confused...HA! 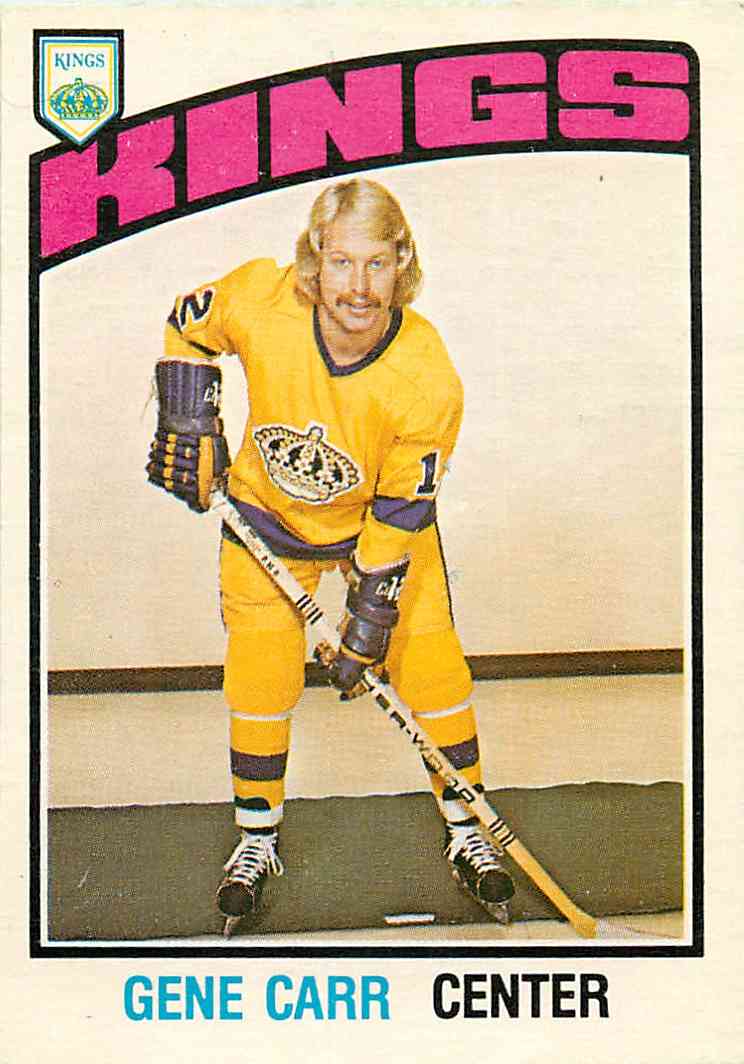