Wanna blog? Start your own hockey blog with My HockeyBuzz. Register for free today!
June 15, 2011.

Brad Marchand and Patrice Bergeron each scored a pair of goals, and goalie Tim Thomas stopped all 37 shots he saw. The Bruins were Stanley Cup Champions.

Nearly eight years to the day, Marchand, Bergeron and the rest of the Boston Bruins are hoping for a similar result.

It has been a wild ride for the 2018-19 Boston Bruins. A season that started with a 7-0 beat down in Washington now ends with a Stanley Cup Final Game 7, and the chance to skate the best trophy in sports around the TD Garden ice.

After surviving a season full of injuries to key players, and a stacked division, things really fell into place for the Bruins in the playoffs.

Now in the Stanley Cup Final, and in a series that has had overtime games, suspensions, blowouts, missed calls leading to goals and much more, who knows exactly what Game 7 will bring.

It will be fun, it will be horrible, it will be exciting, it will be devastating, it’ll be a long night for one side, and not long enough for the other.

Whether you’re a fan of the Bruins, Blues, Maple Leafs, Sharks or just a fan of the game, we can all agree that Game 7 of the Stanley Cup Final is like no other sporting event.

When it comes to Game 7, one bounce, one missed assignment, one pass an inch off the mark could be the difference in having your name engraved into the Stanley Cup, or your name added to the ever-growing list of players who have come so close, but never able to capture the ultimate prize.

The Bruins core has been here before. Marchand, Bergeron, David Krejci, Tuukka Rask and Captain Zdeno Chara have all experienced the high of winning the Stanley Cup and the low of losing one.

They hope to avoid the latter. As they do so, here are three keys to a Game 7 victory.

Keep Ryan O’Reilly away from the net

He’s been by far the Blues best player. With seven points in six games, O’Reilly has registered a point in all but one Stanley Cup Final contest, scoring a goal in each of the last three.

But with what’s been working so well for O’Reilly, leading to his four goals in the series, keeping him off the board should be an easy problem to solve.

Just don’t let him get to the net. 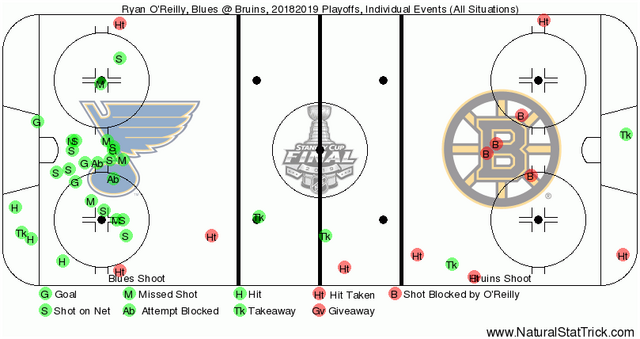 Looking at the above event map for O’Reilly, you’ll see three of the four goals scored by O’ Reilly have come from below the hashmarks.

I thought in Game 6 the Bruins did a job good of changing things up in the defensive zone, focusing more on taking away the time and space in front of the Bruins net.

The Bruins have played in five elimination games in the 2019 Stanley Cup Playoffs. Marchand, Bergeron and David Pastrnak have combined for nine goals and 10 assists in those five games.

Five-on-five during the Stanley Cup Final, the line has been non-existent, scoring just one goal in six games.

But with the Stanley Cup on the line in a do-or-die Game 7, all that goes out the window. If the Bruins can get anything from their top line—as they did in 2011—it will be hard to see the Blues doing enough to beat the Bruins.

Tuukka Rask in the zone

If Rask is in the zone like he was in Game 6, none of the above may matter.

He’s been the Bruins best player throughout the entire playoffs and should the Bruins win game 7 Wednesday night, he’s a lock for the Conn Smythe trophy. Heck, if the Bruins lose, there’s a chance he could still walk out of Game 7 with the honor.

What Rask has done in the five elimination games he has played in has been downright silly. Going 5-0 in those contests, Rask has a .973 save percentage and a 0.80 goals-against average with two shutouts.

We’ve often talked about how much heat Rask takes for failing to win a big game, or failing to make a big save when needed. He’s done plenty of that throughout the playoffs, and I expect some more of that in Game 7.

After the long layoff between Game 4 of the Eastern Conference Finals and Game 1 of the Stanley Cup Final, I thought Rask was a little rusty in the first few games of the Final. But in Games 5 and 6, I thought he looked much more like the Rask we’ve seen throughout the first three rounds of the playoffs.

That bodes well for the Bruins Game 7 chances.

Join the Discussion: » 68 Comments » Post New Comment
More from Anthony Travalgia
» On Torey Krug, Jake DeBrusk and what their next contracts look like
» No Bruins player has voiced a concern about returning to play
» Matt Grzelcyk is taking a cautious approach in NHL’s return-to-play program
» Despite continued setbacks, Kevan Miller working towards NHL return
» Bruins have first positive COVID-19 test