Wanna blog? Start your own hockey blog with My HockeyBuzz. Register for free today!
Follow @TylerTyping
The modest and confident Kirby Dach knows he's going to be a difference maker. He already possesses an NHL type frame at 6'4 / 200 lbs… oh and he can move.

The right-handed centre would be an excellent pick in this draft and will surely go in the top 10. Should the Blackhawks take him at #3?

We've looked at Alex Turcotte already , now let's do a deep dive into who Kirby Dach really is as a person and player.

First, let me offer some perspective, here's where he ranks:

That's not too shabby. Dach is definitely in the conversation of that 2nd tier of forwards and Byram after the Hughes/Kakko rankings. 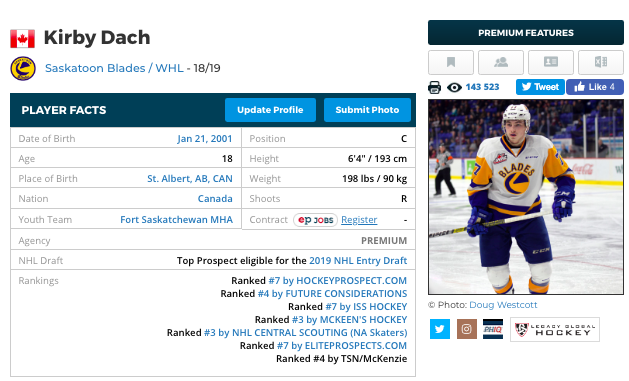 
And here are some highlights (so you can see on-ice skills):


And here is an interview (so you can get to know the player off-ice):

Based on the highlights above, where Dach is using his power forward skill set to score at will, I find it interesting that his goal scoring prowess is somewhat of a "new phenomenon". I'm not saying that's a good or a bad thing… just that it's a thing.

Overall, I find Dach to be a very interesting prospect and think that his goal scoring will only continue to flourish as an NHLer one day. At 18 he thinks the game so well and has for a long time.

It looks like Wiz agrees based on his assessment of Kirby here:

"Got an early taste in the "Dub" when injuries befell the forwards on Saskatoon, and showed off his competitive nature and was able to set up and score goals as a 16 year old, and displays smarts, size, good feet and a 200 foot commitment. Not a speedster, but has a great stick and soft hands as a high-end playmaker. Can control the pace and the play. Another wing-centre who is very strong on his skates and can move with above average speed while he maintains possession using his soft hands to find open line mates when he has the puck, and quickly ghost into quiet soft areas to receive returns and scoring looks. When watching a guy this big, you think he is going to get held up but he seems to keep driving effortless keeping the defenders away from the puck with his long reach and staying in motion while he supports the play. He avoids attackers with side-stepping and a quick stick. He follows the action but the action tends to follow him too. Strong in so many phases of the game already, he is always close to attackers in his end nudging close deterring their advance. Is a regular of the PK and PP. I think there is upside as a pro scorer, but many of his goals will continue to come with plays he started where he positioned himself between the circles, stick on the ice, and wasn't stopped. He is able to read coverages, make sharp cuts, by driving into the turns. His edge work keeps him away from closing traffic, and frequently leaving him uncovered in the dirty areas. Plenty of room to imagine him as blossoming as a scorer as well as set-up guy. May project as an NHL centre. Big guy with big strong wrists, who gets in close and difficult to move out from the front or take the puck away from. It might take time but no NHL team is going to pass on big man with these tools." (Bill Placzek, DraftSite.com)

I think Mark Kelley and Stan Bowman will look long and hard at a guy like Dach. I mean, who wouldn't want a 6'4 / 200 lbs centre who's being compared to a Ryan Getzlaf.

I don't foresee the Blackhawks taking the big Canadian though as I think they are players with higher ceilings in this spot.

Dach's skating is good, but not #3 great. It can get better, however, there are some players that will be up for grabs with better skating abilities and overall skill set than Dach.

If the Hawks pass, Dach will find himself in one of the following cities: Colorado, LA, Detroit, Buffalo, Anaheim or Vancouver as he will be a top 10 pick.

I could be completely wrong, however, and Stan could call his name on June 21st.

Here's the expert Bill "Wiz" Placzek on why and how that could happen:

The Blackhawks select Kirby Dach if… they value his calm, long arms and hands that deliver strong tight passes after being able to protect pucks and read the entire ice. He makes his teammates better on the attack. (Bill Placzek, DraftSite.com)

See ya out there,
TC