Wanna blog? Start your own hockey blog with My HockeyBuzz. Register for free today!
With the majority of trade rumors surrounding the Penguins talking about shedding salary (Malkin, Letang, Kessel, Maatta) it makes sense to try and look at some of the options the team might have to spend their newfound cash. This does ignore how stupid it would be to move some of those players in order to free up cap space.

Today’s focus will be on the Carolina Hurricanes Micheal Ferland. He was consistently brought up as a trade deadline acquisition until the Hurricanes ultimately decided to not move him. Carolina elected to take the chance of losing him as an unrestricted free agent to keep his services for their playoff run. While the Hurricanes have had a great postseason Ferland has been injured and limited to five games and a lone assist.

There were a lot of teams interested in trading for Ferland and as it turns out the Penguins were one of them.

From Pierre Lebrun
earlier in the year

While you can name almost any top contender and link that team to Ferland — he’d be a heck of an addition for any top contender — a new team to throw in the mix which I hadn’t heard before now is the Penguins. You know veteran GM Jim Rutherford is always active ahead of the deadline, and he’s already made a few deals this season, but I hear that Ferland is among the targets for Pittsburgh if there’s a deal that makes sense. Again, Rutherford’s not alone. Most contending teams have pending UFA power forwards like Ferland and Wayne Simmonds on their wish list.


It's worth noting that when Jim Rutherford is infatuated with a player he will usually keep circling until he gets the player or at the very least all avenues have been explored. Derick Brassard is a recent example of this. With Ferland becoming a UFA I think there’s a real possibility the Penguins create cap space through trades and use the money for a player like Ferland.

Carl Hagelin was traded away for Tanner Pearson in an effort to change things up and boost the offensive productivity of the left wing position. I think this will remain an area Rutherford tries to fix. 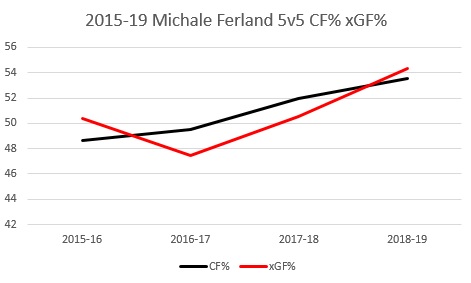 Ferland’s CF% and xGF% has improved each of the last three seasons. He does play for Carolina though. The Hurricanes have been one of the best possession teams in the league the past few years. There could be some team effects at play. Here are his relative numbers 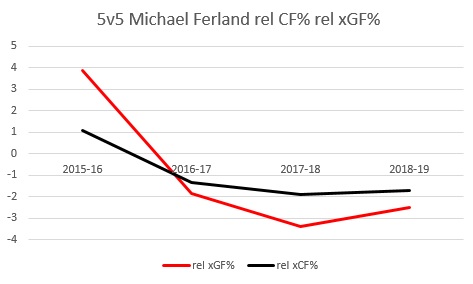 What this tells me is he is not driving the success in these areas for the Hurricanes. He isn’t a drag on CF%. His relative numbers are negative, but not by a lot. The rel xGF% are a little worse. Not horrific, but it is worth raising an eyebrow at them.

Here is a look at his passing ability

He’s not bad and he’s also not great. I see a trend. Here is his offensive production at even-strength

Not bad, not great. It is officially a trend. Micheal Ferland is the kind of player who is just there. He’s capable of making good plays, but not capable of doing them frequent enough. This is starting to sound like a description of Tanner Pearson when he was doing OK for the Kings.

His only significantly good offensive season was when he was 25, otherwise known as a player’s athletic prime. Ferland will be 27 entering free agency. It is likely he will still have some productive years left. The issue, as it is with any contract, is what do you have to pay for those productive years? In unrestricted free agency that means both term and money.

The Penguins don’t seem too concerned about 3 or more years from now so they might be a team totally fine with overpaying for middle-tier depth in unrestricted free agency. We saw this attitude craft the Patric Hornqvist contract. Keep pushing things three years down the road. All that matters is right now. Unfortunately, the choices being made by the team aren’t helping the right now either.

Another reason Rutherford might overpay for is “push back”. Ferland is known to be a physical player and given what we’ve seen since June of 2017 it is one of the most important things to Rutherford. It’s the reason he thinks his collection of defenseman are the best they’ve been since he was originally hired. When you combine the “push back” factor with the knowledge Rutherford already inquired about Ferland you have a situation where the Penguins will be the team to give Ferland a four-year ~20M contract.

Unless the players being moved out are Jack Johnson, Erik Gudbranson, or Patric Hornqvist it doesn’t make sense to move other effective players out to then give the money to a physical winger who just blends in. Ferland should go out and get as many years and as much money as he can. I just don’t think the Penguins are the team that should give it to him. The upside is Tanner Pearson with the Kings. The downside is… Tanner Pearson with the Penguins. Neither is great and one is terrible.

Join the Discussion: » 74 Comments » Post New Comment
More from Ryan Wilson
» Evgeni Malkin led league in 5v5 points per 60. Do the Penguins know why?
» Penguins lose another player for year + Solving draft and playoff format
» Pittsburgh could be a hub city and win draft lottery
» Are the Penguins getting screwed? That's a hard NO
» Likely playoff format has the Penguins playing...