Wanna blog? Start your own hockey blog with My HockeyBuzz. Register for free today!
A lot has been made lately about when the Penguins lost their way. The general consensus is it occurred on June 23, 2017 with the Ryan Reaves trade. I think it is pretty accurate to say that. This is when the speed and skill approach was abandoned. It is also when the front office went through a drastic retooling.

One of Rutherford’s perceived strengths is his ability to make trades. There is no doubt acquiring Phil Kessel, Nick Bonino, and Trevor Daley was a huge win for the team considering the team was also able to shed horrible players like Brandon Sutter, Rob Scuderi, and Nick Spaling in the process.

The trades since 2017? Yikes. Somebody lost their fastball.

The acquisitions of Nick Bjugstad and Jared McCann were met with praise, myself included. This was viewing the trade in a bubble. What happens when you peak outside of the bubble and look at the bigger picture and what led to the Bjugstad/McCann acquisitions?

Here is my best stab at the trade tree since the summer of 2017 when people think the Penguins lost their way. Here are the net gains/losses 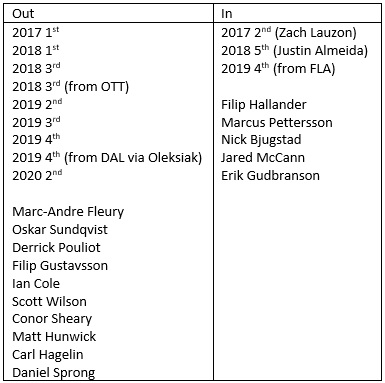 Rutherford’s strength of trading doesn’t really look to strong. There appears to be a ton of waste. Look at all the draft picks spent and for what? It’s OK to spend futures on a team competing for the Stanley Cup. It’s another thing to blow through the entire cupboard to end up with what he has. This speaks to somebody without a plan. This speaks to somebody who knows they won’t be around to reap the consequences of the short-sighted moves that have been made. In true boomer fashion Rutherford has come in, used up all the resources, and is leaving nothing for the future.

You will notice this chart does not have Derick Brassard, Ryan Reaves, Jamie Oleksiak, and Tanner Pearson. They were omitted because I am looking for a net gain/loss of Rutheford’s moves. Assets that cancelled themselves out didn’t make the list. It is worth noting how many players Rutherford acquires and then bails on within a short period of time. Again, speaking to somebody with no true plan.

The team just had to get rid of Ian Cole and his future ~4M price tag so they could pay Erik Gudbranson the same? So they can pay Jack Johnson 3.25M? Ian Cole was unspectacular, but he’s way better than both of those players. Also worth noting he was somebody Mike Sullivan had an issue with. Seems to be a trend of Sullivan having issues with his players. All coaches have a shelf life…

Derrick Pouliot never came close to living up to his #8 overall selection and he never will. Was having him for 1M really worse than Jack Johnson 3.25M for five years? Absolutely not.

I didn’t peg Oskar Sundqvist developing the way he has. I’m not trying pretend that I did. However, moving him and a first round draft pick for an enforcer who was totally unnecessary was incredibly stupid and remains incredibly stupid. Imagine not making the Reaves trade and Sundqvist panning out. There would not have been a need to chase Derick Brassard and Nick Bjugstad. But hey, Zachary Lauzon and Ryan Reaves were definitely worth not taking the risk on Sundqvist and #31 overall.

Carl Hagelin wasn’t producing offensively. He was still great on the forecheck and his possession numbers were consistently strong. Rutherford used him to try and get a reaction from his team and ended up pissing the team off. Instead of having an expiring 4M contract in Hagelin and utilizing his speed Rutherford turned it into a few fruitless months of Tanner Pearson and a 4M Erik Gudbranson. The Gudbranson acquisition is like trying to fit a square peg into a round hole. The way Gudbranson plays is not going to help assist the Penguins forwards hitting their ceiling. Even if Gudbranson is “fine” he’s still a bottom pairing defenseman making 4M on a cap ceiling team. Woof. Did I mention Rutherford pissed the entire team off moving Hagelin? If chemistry is a huge part of success this was a huge example of how not to do it.

This was supposed to be the strong part of Rutherford’s skill as a general manager. What about his signings?

He rushed to give Marc-Andre Fleury a NMC which was completely unnecessary. It will cost the Penguins a 2020 second round pick. Not that the Penguins are going to be the team to break the mold and start handing out offer sheets, but not having their own second round pick this year limits them from offering a player in the following ranges:

A win now team who doesn't care about the future is a prime candidate to take advantage of this strategy. This is pretty much off the table for the Penguins now

Did the team really need to give Matt Hunwick a muli-year deal on July 1st? It was foolish on the day the signing was announced. No hindsight needed. Hunwick’s cap hit ultimately ended up costing the team Conor Sheary and undoing his reasonable extension. Sheary was fast and could bounce around the lineup. He is a very good depth player and provides a coach flexibility in line construction. Sheary’s departure was another example of the team leaving behind their desire for speed and skill.

Matt Cullen’s corpse made the team slower and older. This was entirely predictable, yet ignored. Teddy Blueger would have been completely fine in that role the entire year. This was one of those situations if Dad left to get cigarettes and never came back things would have been just fine.

Patric Hornqvist is a niche player who is 32 years old. His niche involves being very physical and playing with elite talent at even-strength. People still complain about the Jarome Iginla trade and how he played on the left wing and never played with Crosby. Well, the Hornqvist extension and subsequent deployment is just as dumb, if not more. Right now Hornqvist has not only been removed from Sidney Crosby and Evgeni Malkin’s lines at even-strength, but he was removed from the top power play. His body of work since having multiple concussions this year was not encouraging. This was year one of a five year contract.

Last and least the Jack Johnson signing. Rutherford negotiated against himself and signed a player who actively makes the best players on the team worse and signed him above market value. He also brilliantly signed Johnson for five years which is effectively a no trade clause. Instead of realizing their mistake the team doubled down and force fed him top four minutes. As a result this crushed the values of mostly every Penguins player, specifically Evgeni Malkin and Justin Schultz. Two players who had a lot more to give and because of foolish deployment were nullified. The results speak for themselves. Horrible acquisitions when combined with horrible coaching yield horrible results. Who knew?

When you lay out all the sketchy moves Rutherford has made since 2017 it really is jarring. It’s quite a brutal resume Jim Rutherford has put together since the team PDO’d their way to the 2017 Stanley Cup. It shouldn’t come as a surprise. We have decades of evidence showing Jim Rutherford to be a mediocre manager of NHL teams. People didn’t want to believe it when the results were going good. People didn’t want to hear managing the Penguins, who already had every hard to get piece, was one of the easiest gigs in the sport. There’s no ignoring it now. Rutherford has bumbled his way through this cake gig the past few years. Depending on what rumors you believe he may be in the process of sabotaging some of the prime assets he was gifted with when he took the job.

Perhaps the Jack Johnson signing wasn’t the worst one the Penguins have made. It is likely the signing Pittsburgh made on November 14, 2018. Jim Ruhterford’s three-year extension doesn’t start until July 1st of this year. Godspeed.

Join the Discussion: » 135 Comments » Post New Comment
More from Ryan Wilson
» Evgeni Malkin led league in 5v5 points per 60. Do the Penguins know why?
» Penguins lose another player for year + Solving draft and playoff format
» Pittsburgh could be a hub city and win draft lottery
» Are the Penguins getting screwed? That's a hard NO
» Likely playoff format has the Penguins playing...