Wanna blog? Start your own hockey blog with My HockeyBuzz. Register for free today!
Victims of a similar fate of late, the 8-7-2 Calgary Flames are in Philadelphia today to play the 7-7-4 Flyers.

So Who is Playing Then?
The Flyers are without most of their offensive firepower of late.

Missing so many players has led to some unfortunate results beyond just the win column.

You look at that dismal 50% PK rate and hope the Flames can get some momentum going tonight. Fortunately for Flyers fans, the Flames have been converting powerplays at a 17.7% rate in that same time frame. 17.7% puts the team 25th overall in that category.

Despite putting up bottom feeder stats, any team coached by John Torterella is going to push the opposition to the limit in terms of work ethic. The Flames are far from an assured win, even if the Flyers’ second power play unit features resident enforcer Zach MacEwen.

Time for a Breakup?
The pairing of Noah Hanifin and Rasmus Andersson have been getting out-attempted of late.

Not ideal, but the two are usually facing the higher end of the opposing offence. Seeing their shot attempts on ice stats sitting below 50% on the season is surreal.

We can see the underlying stats aren’t great for that pairing. We can also see that Nikita Zadorov and Micheal Stone have quietly been having very strong seasons — and that there may be more to Dennis Gilbert than just being a 7th defenceman.


Brett Ritchie
It appeared Brett Ritchie had played himself into Darryl Sutter’s doghouse — although something seemed off about it.

Luckily, Brett Ritchie was on the ice. The 6’4” 216lb winger mauled Gudas. Eventually pinning him inside the net of Spencer Knight. The two combatants get offsetting roughing minors and Ritchie gets an additional crosschecking penalty. Not the first unnecessary cross checking penalty taken by Brett this season.

As it turns out, Brett Ritchie doesn’t play another shift that game.

The initial prognosis was that he was benched for taking the extra minor while the Flames were defending a one goal lead. A lead they lost on the ensuing penalty kill. One of three leads the Flames blew over the course of the game.

An update today from Pat Steinberg sheds a little light on the situation. 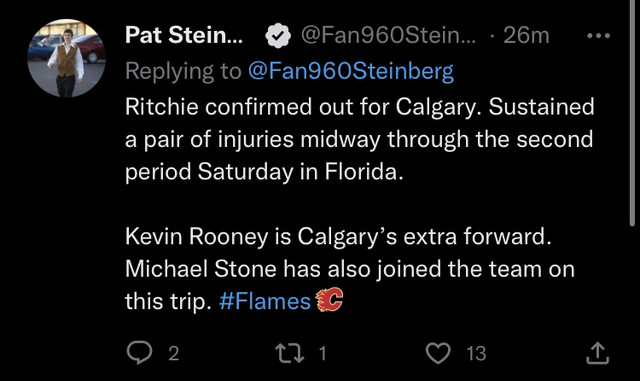 Two undisclosed injuries. The Flames will miss him. Prior to the Saturday’s game, Ritchie had the most hits among forwards despite only playing a hair over ten minutes a night. He also ranked sixth in scoring among that same group with four goals and two assists.


Game time is 5:00pm mst. Catch it on Sportsnet in Canada and NBC in the States.

Stats via naturalstattrick.com and nhl.com.