Wanna blog? Start your own hockey blog with My HockeyBuzz. Register for free today!
I have previewed a number of free agent players at both the goaltender and forward positions the past few weeks. I believe the Penguins need to upgrade and transform their scoring attack to compete with the other contenders in the Eastern Conference.

One thing I haven’t advocated for is assuming Sam Poulin or Nate Legare can fill an NHL roster spot next year. I don’t think most people are, either. I think we can all agree the CHL transfer agreement is garbage and artificially holds players back in development because the “greatest hockey country in the world” is worried their citizens will stop attending games if the transfer agreement goes away. Players like Poulin and Legare would have benefited a lot more from the AHL. Alas, that wasn’t the reality and here we are.

The Penguins best two prospects both finished their fourth year in the QMJH and if I’m honest their offensive output wasn’t encouraging. Poulin had 25 points in 19 games and Legare had 24 points in 19 games. The sample isn’t big because of COVID but for comparisons sake Max Talbot had 98 points in 51 games his year 4 season in the Q. As a general rule older players in this league need to have crazy point totals in their year 4 seasons and these two did not in their small sample. Out of the three CHL leagues (OHL, WHL, QMJHL) I find the Q as the least impressive so it is even more important for year four players to impose their will. Poulin and Legare did not. Don’t take my word for it though: 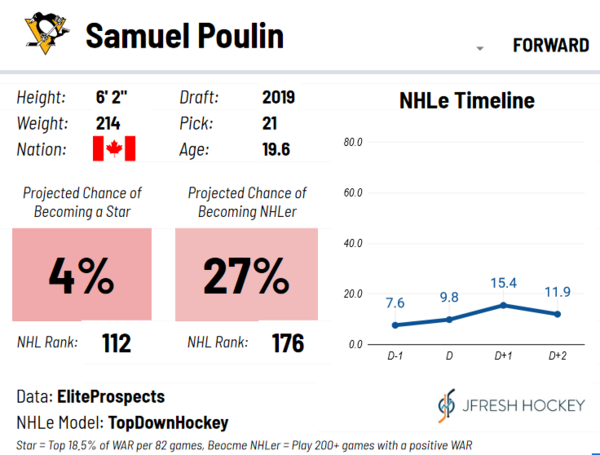 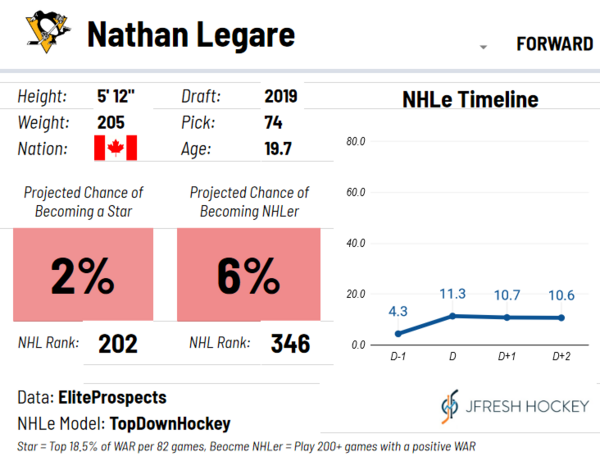 Now, I want to use an old Josh Weissbock quote that applies here.

“These are probabilities, not destinies.”

Is there a chance these players buck the data, yes. Is it likely, no. This is why I have talked about using both these players in a trade over the past year. The longer this plays out the less of an unknown they are. The unknown factor is what will drive the perception of their value. They may be the Penguins best prospects, but they certainly aren’t A prospects and likely not even not B grade prospects.

The Penguins have to make a choice in the very near future with these two. Do they think the underwhelming year four numbers are because of the shortened COVID season or do they make the bet these players will never gain solid traction? I say this because once they start playing in the AHL this year if their numbers aren’t anywhere near a point per game they will start to lose their remaining perceived value. The opportunity to package them to bring in an actual NHL player of substance will dissipate.

The question boils down to do you think either player can help Sidney Crosby or Evgeni Malkin in the next year or two? As of right now signs aren’t pointing to a resounding yes. Even if they are able to carve out decent enough NHL careers five years down the road what does that really do for the Penguins? After this window is over who really cares about grasping to mediocrity afterwards? You’ll need to rip everything down to the studs anyways.

My tl;dr here is to have no reservations about using either Poulin or Legare in a package to improve the current product.