Wanna blog? Start your own hockey blog with My HockeyBuzz. Register for free today!
The Penguins have had a little time to decompress after a frantic March. During this time the Flyers made their life even easier by losing the Buffalo Sabres. The Flyers still trail the Penguins by ten points in the standings and now only own one game in hand over Pittsburgh. Things are looking bleak in Philadelphia. 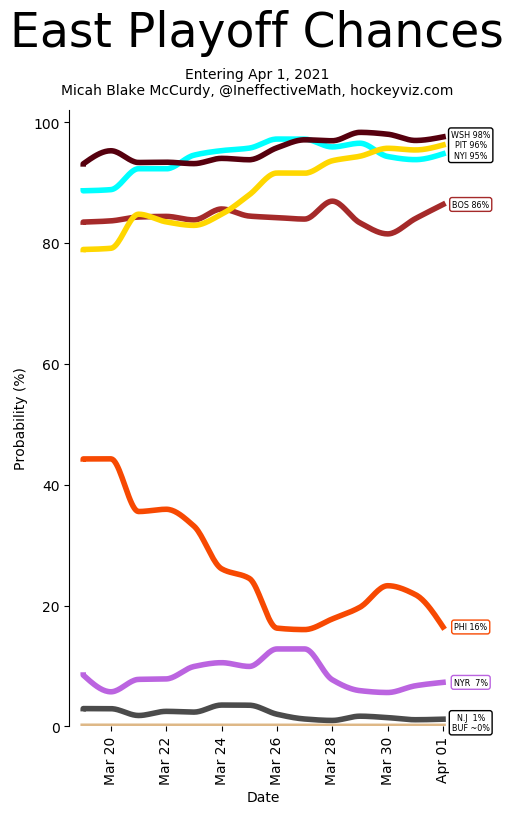 Pittsburgh is up to 96% probability for the playoffs and Philadelphia is at… 16% oof.

These games against the Bruins just aren’t as important as they could have been for Pittsburgh and it is great. Pittsburgh did such a great job in March they have the ability to have some missteps moving forward. Losing isn’t the most damning thing for them at the moment. Having notable players getting injured is the only potential negative consequence at the moment. Me saying this doesn’t have any impact on reality. The Penguins have injury issues all the time regardless of what people say or write.

There is some good news on the injury front to report today.

Both Brandon Tanev and Teddy Blueger were full participants in the morning skate. Tanev is a game time decision. Coming from Mike Sullivan more times than not means the player is going to play. Sullivan ruled out Blueger, but it is very good he is back to having no restrictions. I imagine once he gets a practice or two he will be back in the lineup. Once Blueger is back we will find out if Frederick Gaudreau has supplanted Mark Jankowski in the lineup. He 100% should replace Jankowski. In Gaudreau’s 67 minutes so far he has an xGF% of ~53 while Jankowski is ~39 for the season. My hope is that the Penguins trade Jankowski for an 80th round draft pick so the temptation to play him is gone.

Tristan Jarry has joined the team for the six game road trip so whatever the mysterious ailment is it isn’t bad enough to keep him home. This is obviously good news. For now they can lean on Casey DeSmith who has had a tremendous year in the backup role.


Nikita Gusev was put on waivers today. The Penguins could certainly always use some more right handed forward depth, but the answer here is a hard no. Gusev is having a horrific season. His 5v5 points per 60 is 0.32. Yes, you read that correctly. His xGF% is 40.41. Even Jankowski has a 5v5 points per 60 of 0.84.

Tyler Ennis is also on waivers and he is still a very useful depth player. A points per 60 of 1.71 at 5v5 and an xGF% of 48.81. He isn’t doing this on the back of McDavid or Draisaitl. His two most common linemates are Josh Archibald (remember him) and some guy named Jujhar Khaira. He played with Draisaitl for about 40 minutes and McDavid only 28 minutes. Ennis is a UFA at the end of the year and carries a 1M cap hit.

Tyler Ennis, placed on waivers by EDM, is still a perfectly good bottom six forward who pushes play the right way offensively and produces at a decent rate even if he's not much of a finisher. Would be a good pick-up. #LetsGoOilers pic.twitter.com/dDnTsyZu71

If he played right wing or even center I think it would make sense for the Penguins. He seems to be predominately on the left wing these days. I think finding another center or right wing should take precedent. That said, some contender should claim him. Stick him on the fourth line. It is nearly guaranteed to be an upgrade for most teams.