Wanna blog? Start your own hockey blog with My HockeyBuzz. Register for free today!
The Penguins picked up some much needed points in the standings in a solid overall team win against the Islanders. There were very few passengers and one of the main drivers was a welcomed sight. Tristan Jarry played his second consecutive strong game. He has a long way to go to claw himself from the bottom of the division among goaltenders. It will be one game at a time. Right now he’s up to two in a row. It’s a start 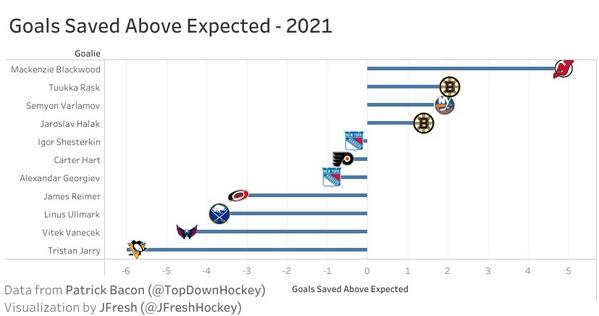 The last two games Jarry has stopped 70 out of his last 74 shots. The Penguins don’t have to play perfect hockey when this happens. It lessens the burden on everyone. Playing on teams where you are constantly worrying about the next shot going in is exhausting and can no doubt negatively impact the team. If this continues I believe it will have a positive impact on the product in front of him.

Teddy Blueger is off to a hell of a start this season. After scoring last night he has three points in his last four games. He has nine points in 15 games so far this season. It is the best hockey he’s played as a Penguin and I don’t believe he’s ever been bad as one so that’s saying something. It is a small sample of 15 games, but his points per 60 is at 2.86(!). He’s doing this with only about 25% of his starts coming in the offensive zone. Right now he is playing better than Matt Cullen did at any point as a Penguin and that’s saying something. The big difference is that Cullen was a fourth line center properly slotted in the lineup while Blueger is clearly the third line center. If the Penguins were able to use Blueger’s line as a fourth line the Penguins would be cooking with fire as far as being a contender. As it stands the current fourth line is beyond pathetic and takes away from the good work Blueger is putting in at the moment. Jim Rutherford did a shameful job this past offseason trying to fill out the roster.

Speaking of that fourth line… Play anybody else at center other than Mark Jankowski. The CF% stat isn’t the end all be all, but you cannot be at the bottom of the list every single game. I don’t care what your usage is. Mark Jankowski stinks. He only makes 700k either trade him or bury his money in the minors. Playing him isn’t going to help anything.

The power play has been better lately. The team is attacking their 2v1’s way better than they were at the start of the year. However, I cannot believe they ran 1:15 of a 5v3 power play with Malkin predominately on the left side of the ice. It was maddening to watch. I can’t wrap my head around not trying to make him the focal point from the right side. In fact, I would use Malkin the same way the team would use Phil. Skate with the puck from top of the circle to the top of the blue line and curl back in to take a wrist shot with traffic down low (specifically Crosby). If the top guy of the triangle wants to chase Malkin up top you kick it over to Letang who should have some great east/west options with the killer up in no-man’s land. Rinse and repeat. Don’t do whatever it is they did yesterday again.

Mike Matheson’s positives have been coming out the past few games. His skating and ability to make some plays with the puck have directly led to Penguins goals. His contract is always going to stink, but it isn’t a Jack Johnson situation. He can actually make some plays to help the team. The key with him (and Cody Ceci) is to manage their workload and try not to make them be something they aren’t. If Kris Letang, Marcus Pettersson, Pierre-Olivier Joseph, and John Marino can do what they are capable of it shouldn’t be an issue.

Mike Sullivan took a half measure with the line changes and flipped Kasperi Kapanen and Jason Zucker. It resulted in Kapanen getting a primary assist on the Crosby tip goal early on in the contest and Jason Zucker adding a goal and an assist on the empty netter. Tough to argue with the results. I still want to see Malkin with Guentzel and Zucker with Crosby. Even with the two points on the evening I still don’t get the feeling there is good chemistry between Malkin and Zucker.

Bryan Rust just needs to keep on keeping on. He’s been great this year again.

The Penguins are currently two points behind the Islanders for the final playoff spot. Pittsburgh has a game in hand and the two teams will meet again tomorrow.

Join the Discussion: » 99 Comments » Post New Comment
More from Ryan Wilson
» Penguins look lost against the Islanders
» McCann he get it going?
» Penguins need to avoid self-owning themselves this time
» Teddy or not Blueger might have to play in the top six
» Capitals shaking up the lines for tonight's game