Wanna blog? Start your own hockey blog with My HockeyBuzz. Register for free today!
As Brian Burke and Ron Hextall settle in to their new roles with the Pittsburgh Penguins they will be formulating their plan of attack for improving the team. Part of that plan is going to be improving the current product. The Penguins have made it no secret they still have plans on competing for a championship this year. The current roster isn’t good enough. It won’t be easy, but they will have to do something bold. They don’t have a third line. They have a good fourth line and a bad fourth line, but no third line. You can’t make a run with two fourth lines.

So what is bold and would revamp a fourth line into a third line? I have a player in mind who has been a favorite of mine for a very long time. I brought his name up a few weeks ago on the podcast in response to the following hypothetical question

I am magically blessing you with $5M in extra cap room and the 15th overall pick in the 2021 NHL draft. What player are you targeting today (not at the deadline) via trade using primarily those two assets.

The bold move would be acquiring Ryan Getzlaf.

It’s definitely an idea that’s way out there. It won’t be easy. It likely won’t be cheap. It certainly won’t be accomplished with the hypothetical parameters from the question I was responding to.

It would be a seismic change for how the roster is built. Getzlaf would bring a huge boost of offense to the team. If we are talking about finding a third line center this has to be one of the more striking options. He has elite hands and great awareness. His passing is high end. He is right-handed. He can be another option for the power play on a team with minimal options among right-handed players. You could even get creative and play Getzlaf on the wing with Malkin and bump somebody like Kapanen to the bottom six in certain game situations. The main result would be the options it opens up for Mike Sullivan. Something the team just doesn’t have right now.

Is he available? As of right now he is a pending UFA. He is an Anaheim Ducks legend, he has a full no-movement clause and there is a chance he not only wants to finish the year in Anaheim, but stay longer. It remains to be seen what plans Ducks general manager Bob Murray has for Getzlaf. He already jettisoned the other half of Anaheim’s power forward duo in Corey Perry. He might be ready to move on from the other. Not that Getzlaf can’t still sign an extension, but you would think this would be something both parties would have taken care of by now.

Getzlaf has been in sunny Southern California with his family for a long time. It would be a big change and one he would have to be willing to make midseason. Perhaps some familiar faces would help if he were open to moving. His former general manager he won a Stanley Cup with is now the team president for the Penguins in Brian Burke. Hockey executives love to target what they already know. Brian Burke is no stranger to making bold deals. The Gold Medals with Sidney Crosby aren’t going to hurt things, either. If you leave your long term home to go searching for another title teaming up with Sid isn’t the worst option. Especially, if your arrival would solve the biggest issue on your new team’s roster. 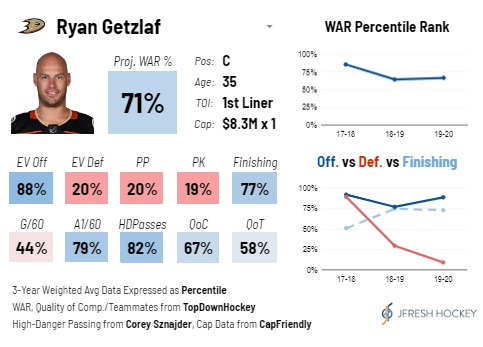 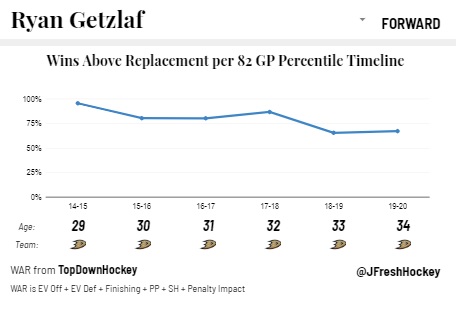 Even at age 35 we are talking about a player who is still pretty good and certainly a player who can help a contender on the third line. His defense is cratering but that is what the ZAR-Blueger-Tanev line is for. The Penguins need to diversify their offensive attack at 5v5. It is their biggest hurdle at the moment. They could also benefit from adding more potential right-handed options on the power play. Bryan Rust has been good, but he is a different skill set. Getting a gifted puck handler on the left circle has been a void ever since Kessel was traded.

As mentioned, it would be a bold move. The Penguins don’t have a lot of assets to play with. They probably will only get one shot at a significant acquisition. They do have a glut of left defensemen, but Anaheim already is paying Cam Fowler and Hampus Lindholm. Even dangling somebody like Brian Dumoulin is likely to not be attractive to them. You would be definitely be talking about Sam Poulin and/or Nate Legare because it is the best the Penguins have to offer. I have no reservations moving them. I just don’t think they are a guarantee to help the big roster in time if the goal is to make another run at a title, something the Penguins have stated they are going to do. Things like next year’s first round pick would probably be on the table. You would be paying Anaheim to eat some of the cap hit as Getzlaf’s 8.25M number is not something the Penguins can fit. Even at 50% there are other moves that would need to be made in concert with any Getzlaf trade with Anaheim. Moving Marcus Pettersson or Brian Dumoulin for futures would be something that could be done to free space assuming Matheson’s 4.8M and Tanev’s 3.5M are locked in. The emergence of Pierre-Olivier Joseph makes this one of the most plausible and logical routes to explore if the team is going to make a significant change. You would clear space and also recover a future piece or two in the process.

This is the reality of what Rutherford left behind. You either do these kinds of things or move forward with what you have. You will have to rob Peter to pay Paul. The roster construction puts the current regime between a rock and a hard place. Stay put and likely struggle mightily against Tampa Bay and Boston or be daring and forfeit the minimal futures you have left from your 28th ranked prospect pool.

I don’t view this as something likely. I do view it as something bold and the team just hired one of the boldest front office executives the league has had. The executive has direct ties to the player in question. The player fills a very specific and needed role. I am pretty sure this player wears long pants, too. Crazier things have happened.

Join the Discussion: » 628 Comments » Post New Comment
More from Ryan Wilson
» Penguins look lost against the Islanders
» McCann he get it going?
» Penguins need to avoid self-owning themselves this time
» Teddy or not Blueger might have to play in the top six
» Capitals shaking up the lines for tonight's game