Wanna blog? Start your own hockey blog with My HockeyBuzz. Register for free today!
The Penguins will be back in action against the Rangers tonight after their exciting finish Saturday night. Sidney Crosby scored the game winning goal in overtime and it ultimately led to Tony DeAngelo getting put on waivers after he got into it with Alexander Georgiev. Yes, the Penguins defense depth is horrible right now. No, they should absolutely not entertain the idea of picking up DeAngelo. He is a toxic person and not worth the trouble. He cleared waivers so 30 teams felt the same way. With that out of the way I wanted to focus in on the general manager search.

The Penguins have a clear cut favorite for the job, but there’s a problem. He already has a GM job at the moment with the New Jersey Devils. Tom Fitzgerald is at the top of the Penguins list

Team and league sources described Fitzgerald as the Penguins’ preferred choice to be their next GM. Working in Fitzgerald’s favor, the sources said, are his familiarity with Pittsburgh’s structure, in which a GM will report Morehouse; his strong relationship with team captain Sidney Crosby (Fitzgerald was an interim assistant coach for the Penguins’ 2009 Stanley Cup club); and his proven success as an evaluator and developer of amateur talent.

The Penguins have informed the NHL of their plan to request permission from the Devils to speak with Fitzgerald, a team and league source said. They do not expect the Devils to

immediately grant permission but would “keep knocking on that door,” a team source said.

The situation with Fitzgerald in NJ is kinda weird. His contract expires in June and you would think if they thought he was the right person for the job he would have an extension by now. Regardless, there isn’t much the Penguins can do until they get permission from New Jersey to speak to Fitzgerald and even then they would have to wait for him to become available. Perhaps something could be worked out, but Fitzgerald’s situation is the most complicated out of the candidates mentioned.

Chris Drury and Scott Melanby are off the list. They will not be interviewing.

John Ferguson Jr. remains on the short list and three new names showed up today in Rob Rossi’s article. The new names are Mike Gillis (good), Mike Futa (what team doesn’t interview him?), and Kevin Weekes (no thanks).

I think it is great to see Kevin Weekes name here as the league definitely needs more diversity in front offices. However, he might have the blandest analysis out there in TV land right up there with Keith Jones. He also has no front office experience. I think it would be asking a lot of somebody to jump into this situation with no experience and I don’t think the Penguins should do that.

So we’ll have to see how the Tom Fitzgerald situation evolves. He seems like the guy they want.

As far as the game tonight the Penguins defense is missing yet another player. This time it is Kris Letang’s turn to join the wounded. Here are the lines from the morning skate


Here is the Pens' workflow...


That top pair might be a pretty decent second pairing if the Penguins can ever get healthy again. I’ve been impressed with Joseph’s small sample. If this continues I would definitely be looking to move Marcus Pettersson’s 4M contract. He is an NHL player, but he’s just kind of there. When you look up and down the roster for players that are movable and dispensable Pettersson jumps out to me. 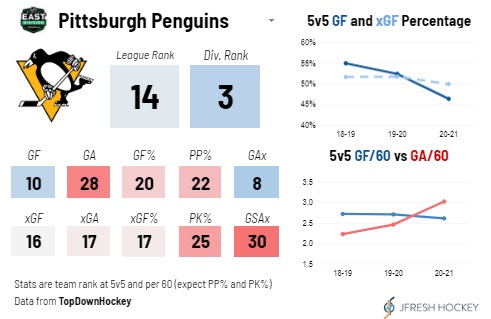 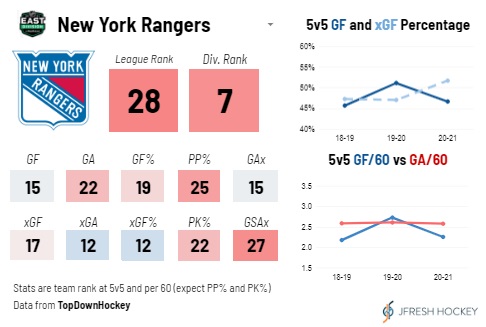 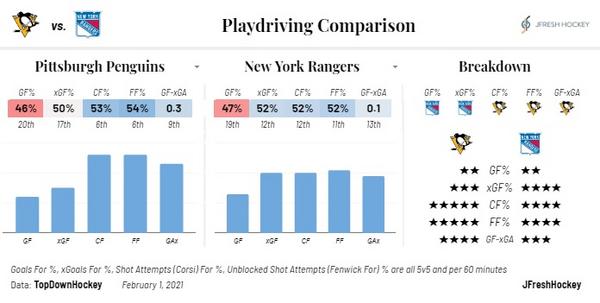 Penguins have been fortunate enough to catch the Rangers four times to start the year. They’ve been one of the most injured teams in the league and if they had to play some more difficult competition they would likely be further down in the standings. The timing has been as good as it could be for the Penguins.

Join the Discussion: » 254 Comments » Post New Comment
More from Ryan Wilson
» Penguins look lost against the Islanders
» McCann he get it going?
» Penguins need to avoid self-owning themselves this time
» Teddy or not Blueger might have to play in the top six
» Capitals shaking up the lines for tonight's game