Czech Republic can be found here

Team Switzerland can be found here

Today’s team is a hybrid. I hadn’t planned on doing a hybrid, but after looking at the rosters of each of the remaining countries there was no way to create a team on the level with the other ones in this series. There’s a reason Team Europe was a thing in the World Cup of Hockey. This Team Europe had the following countries eligible: Austria, Denmark, France, Germany, Latvia, Netherlands, Norway, Slovakia, and Slovenia.

Still a really good player into his thirties, but it does speak volumes that out of European countries who had at least one NHL player in 2019-20 (Austria, Denmark, France, Germany, Latvia, Netherlands, Norway, Slovakia, and Kopitar’s Slovenia) he was the best option. Again, not so much a knock against Kopitar who is a really good player. Just highlighting there’s nobody really coming up the ranks right now among those hockey playing countries.

He can play center or wing, but his ability to defend gets him on the wing here. He isn’t close to being as well rounded as Kopitar and the lesser responsibility will free him up to do the things he is awesome at. He had 105 points last year in 82 games. He already has 110 this year in 71 games. He’s a freak at the offensive end of the ice. Wait until somebody tells Krueger the Sabres could have had him instead of Reinhart.

I really like Ehlers as a player. He’s been a very good NHL player his entire time in the NHL. He’s 24 and he is primed to play his best hockey in the here and now. He had 58 points in 71 games this year and had a realistic look at beating his career high of 64 he had in 82 games during the 2016-17 season, his second in the league. The impressive thing with Ehlers is out of the 58 points he put up in 2019-20 46 of them were at 5v5. He wasn’t living off the power play. He can play at full strength and would fit right in with the other two here. Wait until Krueger hears he could have probably had Ehlers on the Sabres if Buffalo didn’t love Ristolainen the way they do.

A lot of consideration was given to Tomas Tatar. He has had two great years since being traded to Montreal. Much like Ehlers he was strong at 5v5 this year with 48 5v5 points last year and 39 this year in 68 games. He could have been the pick for the third spot on this line and not much would change. He’s good and so is Ehlers.

Mats Zuccarello is another player worth mentioning. He's a step below Ehlers and Tatar at the moment, but definitely above the rest of the pack.

He isn’t the player he once was, not even close. Is he the best defenseman on this team? Maybe? The remaining countries just don’t have a lot of options at this position. Only Slovakia and Germany had a defenseman in the NHL last year among the countries eligible for this team. This is a real weakness and despite having the most countries to pull from they probably have the worst defense of this entire series. 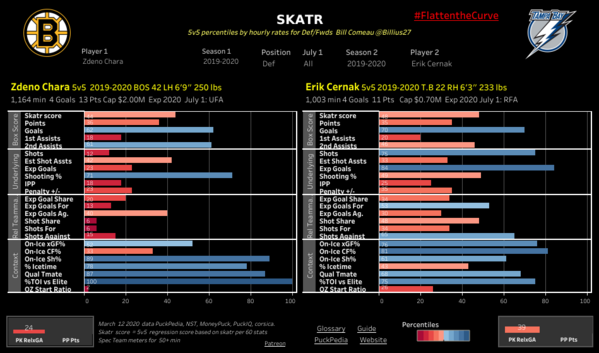 Pretty disappointing. The other NHL options were Andrej Sekera and Korbinian Holzer. I gave some thought to Philip Larsen who had 32 points in 61 KHL games, but went the NHL route instead.

I actually had quite a number of choices and directions I could have taken this pick. I had solid veterans like Frederik Andersen, Jaro Halak, and Thomas Greiss to choose from. I also had an upstart like Elvis Merzlikins. These are all competent goalies. I went with Grubauer because out of goalies who played 1,500 minutes this year he had the second best 5v5 save percentage at .935. Only Tuukka Rask was better at .941. Grubauer’s high-danger save percentage was fifth best at .857 and this team is going to need that number given Draisaitl’s defensive acumen and this defense pairing in front of him. Grubauer also had 13.15 goals saved above average which was third best.

So that’s a wrap on the series. Those are the best starting lineups I could come up with for teams that had enough talent to have a starting lineup. Hope that was something worth checking out during this hockey hiatus.