Wanna blog? Start your own hockey blog with My HockeyBuzz. Register for free today!
The injury news has been pretty awful this year. After writing the blog yesterday Patric Hornqvist went down at practice and his status is unknown at the moment. As a result the Penguins have rewarded Stefan Noesen with a one-year two-way deal worth 700k.

Noesen has been a goal scoring machine in the AHL this ear and has earned his contract to provide spot duty for an NHL team. The contract poses no issue to the Penguins cap management and because it is a two-way contract the money is completely buried when/if they send him down no matter what. Noesen does have to pass through waivers so he could be plucked from another team much in the way Jean-Sebasitan Dea bounced around last year.

So far with the Baby Penguins Noesen has 22 points in 22 games with 14 of those coming on goals. I like the offensive pulse he has shown in the lower league and when you are deciding on bringing up somebody like Adam Johnson or Joe Blandisi I’d much rather go with the guy (Noesen) pumping the net full of goals with more of a history playing in the NHL.

Make no mistake the reason Noesen is on a two-way contract signed in early December is because he has limitations. He is probably going to need some teammates to do some heavy lifting in order for him showcase some of the goal scoring ability he has exhibited in the AHL this season 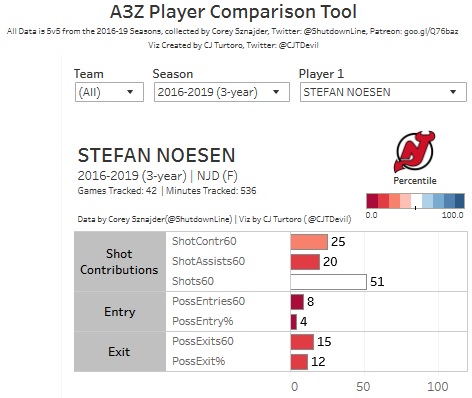 When you have as many injuries as the Penguins do beggars can’t be choosers and having a guy with a hot hand in the minors isn’t the worst thing in the world to take a shot on.

There was some mildly good news yesterday on the injury front. It appears the timetables for Justin Schultz and Bryan Rust are more favorable than originally thought

-Rust is day-to-day with lower-body.
-Hornqvist fell in practice today. Being evaluated for lower-body.
-Schultz (LB) has been skating and next step will be to join practice. Expected to be soon.

If you add it up, these 10 #Pens players combined have missed 87 games due to injury.

Penguins have only played in 27 games so far. Here are the percentages 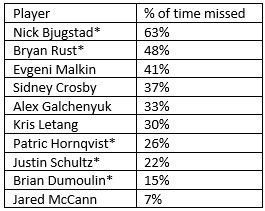 You can see some of these totals are still growing. The asterisks show players currently hurt. Crosby and Malkin have basically missed 40% of the year with Crosby likely timing his decision to have surgery on the Malkin injury so they both were not out of action. Alex Galchenyuk has missed more games this year than Phil Kessel has in a decade. Letang has missed a third of the year. Brian Dumoulin is going to be among the leaders by the time he comes back. It’s been a savage year.