Wanna blog? Start your own hockey blog with My HockeyBuzz. Register for free today!
With holes on the right wing and in their bottom-six, the Bruins elected to make a handful of depth signings when free agency opened in July. Those depth signings, combined with their prospects are how they expect to fill those holes.

After falling one game short of hockey’s ultimate prize last season, the Bruins will return to the ice with a similar roster as the one that no showed Game 7 of the Stanley Cup Final.

But, as is the case with any hockey season, the Bruins should have some young new blood in their lineup when the 2019-20 season begins in Dallas on October 3.

The Bruins boast a handful of promising prospects, including several who are expected to make the team out of training camp next month.

Earlier this month The Athletic began their annual ranking of the 2019-20 NHL farm systems . A little to my surprise, they have the Bruins ranked 29th out of 31 organizations.

However, the amazing Sean Tierney put some data together, and has the Bruins ranked much higher than The Athletic does. 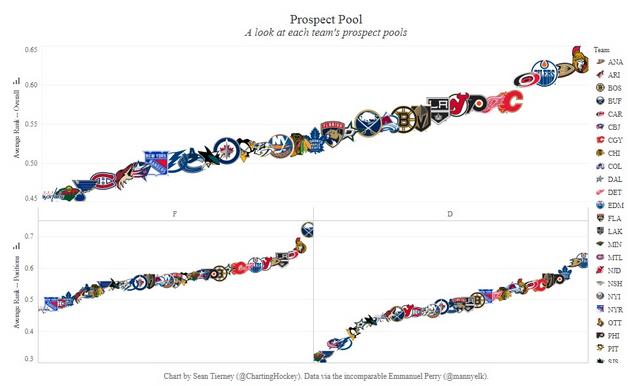 From Oskar Steen to Urho Vaakanainen, the Bruins have a few prospects I really like and a few that should make an impact on the Bruins this season. 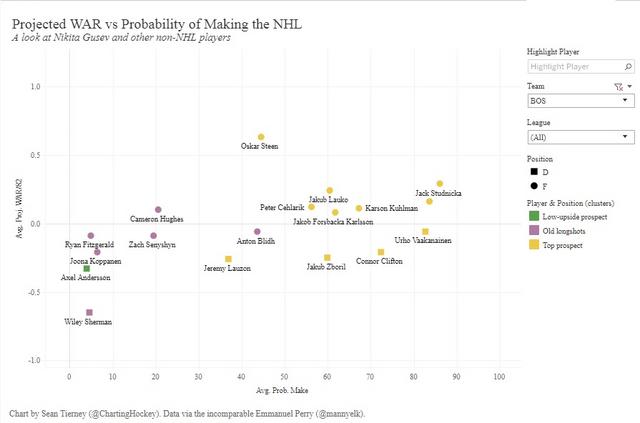 As battles are set to ensue once camp begins, there will also be battles between Bruins prospects. Let’s take a closer look at three of those battles. 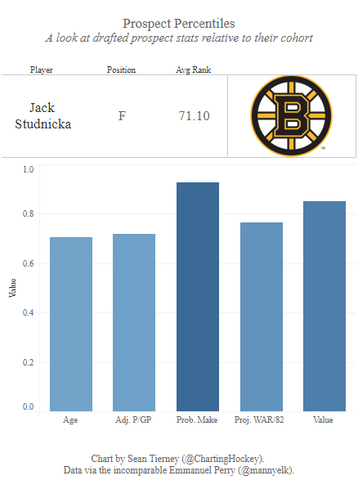 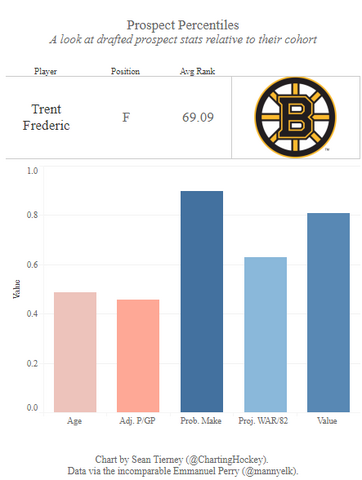 Studnicka is probably the Bruins prospect I am most excited about. But with the emergence of John Beecher, that may quickly change.

There is no denying that Studnicka has talent and has what it takes to play at the NHL level, but it’s a matter of putting it all together for him. With the Bruins having a nice one-two punch down the middle in Patrice Bergeron and David Krejci, they’ve been able to take it slow with Sudnicka, and not force him into a role he is not quite ready for.

There’s been talk about Studnicka playing the wing at different points this offseason. Eariler this summer at the Bruins annual development camp, Studnicka admitted he would be okay with playing the wing as he looks to do whatever it takes to make it to the NHL, but the brakes have been pumped on that a bit as it sounds like up the middle is Studnicka’s ticket to the show.

At 6’1” 172 pounds, it would be nice if Studnicka showed up to camp with a little more muscle on him.

Frederic’s first go around in the NHL wasn’t one to get excited about. Pointless in 15 games, and finishing a minus-four, Frederic hopes for a better result whenever he gets his next chance. Like Studnicka, Frederic’s talent is undeniable. But whether or not it’s enough to earn consistent minutes at the NHL level remains to be seen.

Frederic was nearly a point per game player in his two seasons at the University of Wisconsin where he finished his NCAA career with 65 points in 66 games. As the Bruins remain pretty deep organizationally at the center position, and given his experience at the NHL level, I would think Frederic leads the center group of Bruins on the prospect depth chart.

Edge: I give Frederic the edge out of the gate, but I think the future is brighter for Studnicka. 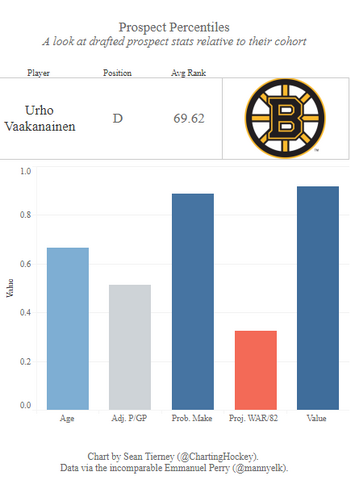 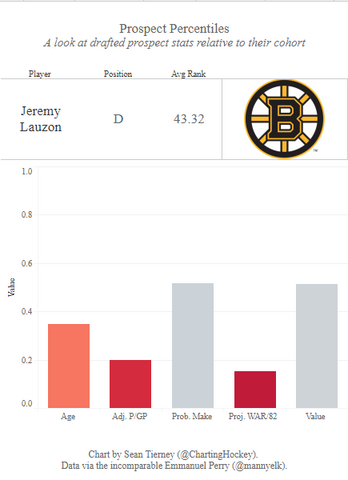 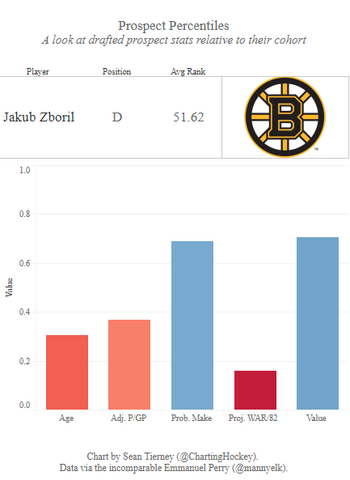 After three successful seasons in the Finish Elite League, expectations were high for Vaakanainen as he came over to North America.

With injures to the Bruins d-core, Vaakanainen made the opening night roster, appearing in two games with the Bruins. But a concussion suffered in a game against the Senators was the last we would see of Vaakanainen at the NHL level.

The concussion he suffered against the Senators kept him out of action for two months, allowing him to represent team Finland in the 2018 World Junior Championship upon his return. Vaakanainen was arguably the tournaments best defenseman, sending him back to AHL action with some added confidence.

What I liked about Vaakanainen in his brief stint with the Bruins was his ability to skate the puck out of the zone with ease. The potential for Vaakanainen to be a mainstay on the Bruins blueline for years to come is high. This coming season is going to be a huge one for his development.

Making his NHL debut last season, Lauzon was impressive when called upon. Often overlooked when it comes to replacements at the NHL level, Lauzon showed Bruins management he is capable of a bottom pairing role.

Even with guys like Vaakanainen, Connor Clifton and maybe others above him on the depth chart, Lauzon is a valuable prospect for the Bruins to have in their back pocket.

A blue collar type of player, Lauzon showed he’s not going to shy away from physical play and does a solid job as a stay a home defenseman. Lauzon however, won’t bring much to the table offensively.

As the 13th overall pick in the 2015 draft, Bruins fans have been waiting for Zboril to get the call to the NHL. It finally happened in 2018-19, but it came as the equivalent of a pitcher coming into the game in the 9th inning of a 10 run game.

As solid as he’s been for Providence in the last two seasons, he’s yet to show enough to earn himself a bigger look at the NHL level. I would think this year needs to be the breakout for Zboril as others have passed him on the depth chart.

One advantage Zboril has is that he comes in over six feet tall and 200 pounds. He’s gotten good at using his size and weight to make things difficult for opponents, but he’s struggled to put together a complete game.

Edge: With John Moore and Kevan Miller unlikely to be healthy when the season starts, and the contract statuses of Charlie McAvoy and Brandon Carlo TBD, the door is open for all three youngsters. I give the edge here to Vaakanainen, with Zboril right behind him. 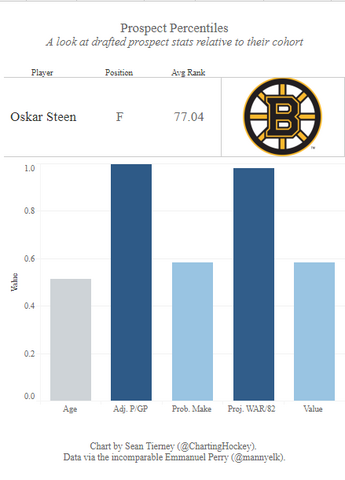 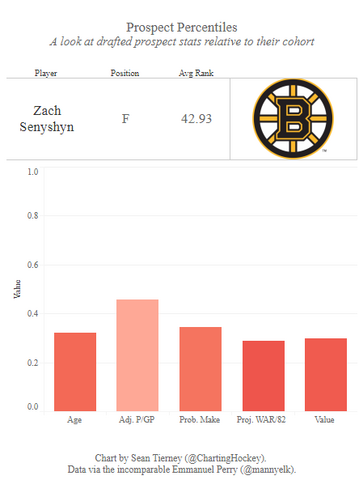 After a successful season in Sweden, the Bruins signed Steen to an entry-level deal in May. A few months later and Steen will have a chance to not only earn himself a shot on the opening night roster, but a shot at top-six minutes on the Bruins right wing.

Watching some video of Steen in Sweden, the first thing I noticed was his speed, and how well he uses it to make plays happen.

A lot of the comments from head coach Bruce Cassidy and the rest of Bruins management from June’s development camp where around how excited they are to see Steen develop in Providence. As much as the talk was about Providence, a solid showing in the upcoming rookie challenge, and a solid training camp and preseason could easily change that discussion.

Another member of the Bruins 2015 first round draft class that’s yet to make an impact, the hope is Senyshyn comes to camp and makes things hard on Bruins management.

Given more of a top-six role in Providence this past season, Senyshyn improved his game, but still didn’t do enough to push his name into the conversation of NHL caliber talent.

Edge: Oskar Steen. If Steen doesn’t make the team this season, expect him to be one of the final cuts in training camp.

Join the Discussion: » 2 Comments » Post New Comment
More from Anthony Travalgia
» Can Don Sweeney hit the trade deadline jackpot once again?
» Brad Marchand bashes Rangers’ defenseman Ryan Lindgren
» A solid day at the office for the Charlie McAvoy and Charlie Coyle
» What’s next for David Pastrnak?
» The enigma that has been Danton Heinen