Wanna blog? Start your own hockey blog with My HockeyBuzz. Register for free today!
Follow @TylerTyping

The votes are in and there is an overwhelming amount of you – 917 to be exact – that believe the Blackhawks should draft Bowen Byram. 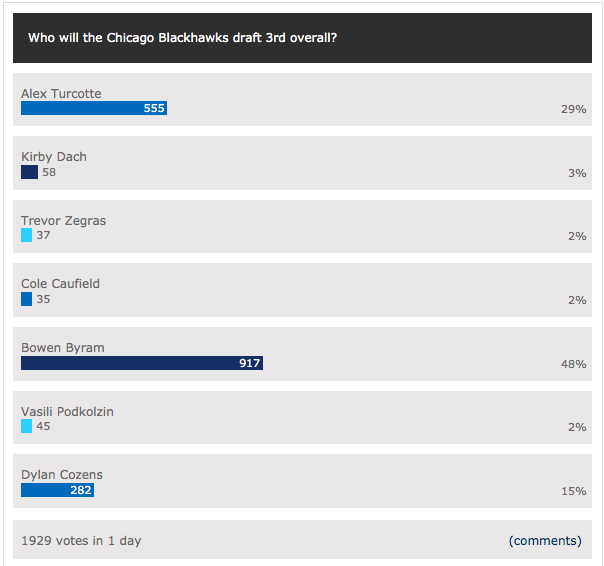 Now, I'm popping in with a quick blog of what I'm hearing. Be sure to check back because the way things are going, I may be pumping out 2 blogs today or updating this one.

This is all based on the fact that, while I don't know if the Hawks are going to make a move today/tomorrow, there is a ton of smoke around them and chatter around the league.

This is expected to be amplified based on all of the GMs being in the same city last night for the NHL Awards.

The Hawks are one team that could benefit from the salary cap being 1-2M short of what was originally projected. What I've heard though is that there is a concern that the cap could be fairly stagnant for the next 2 years. This is making NHL GMs think twice about the contracts they are taking on.

What I was told specifically to the Hawks was that this concern actually has really helped the value of Brandon Saad and Artem Anisimov. You know what you're getting in both players and they are both signed until the summer of 2021. This is the time that the new NHL TV deal should be in place and the league could see a huge spike in the salary cap.

After some of the big dollars being thrown around already with Karlsson, Hayes and soon-to-be Trouba, there is more buzz around the league that maybe trading for players with current deals with 2-3 years remaining might be the best way to go.

"This makes the Olli Maatta trade look better every day," a contact told me.

The Hawks will take to the stage tomorrow and I most of us have them taking Bowen Byram.

However, there have been more and more whispers that they are taking a centre. One source thinks it's Trevor Zegras.

All we can do is wait until tomorrow and celebrate whomever they select because it's going to be a damn good player.

For fun, I've included another poll in this blog. The last time Chicago selected 3rd overall it was in Vancouver; they called out Jonathan Toews' name with this pick.

My guess is Toews returns to the scene of history to make the 3rd overall selection. Maybe he announces the name the next captain for the Blackhawks?

Word is the Hawks aren't as concerned with the logjam on the backend as the fans and media are. However, they would like to eventually move "at least one player out" before the season starts.

There's one thing to have friendly competition but having 9 or 10 NHL defenceman on the roster heading into training camp is a bit of poor planning.

My guess? Gustav Forsling is moved or opts to play a season overseas while the Hawks retain his rights.

There has been a lot of discussion around Erik Gustafsson but I don't anticipate him getting moved based on what I've heard. My theory is that Gustafsson stays with the Hawks all year while Adam Boqvist hones his game in the AHL or OHL. Then Boqvist replaces him in 2020-21 and Gustafsson's rights are dealt or he walks for nothing.

The Hawks don't appear to be worried on any of their RFAs outside of some displeasure from Gustav Forsling's side.

Expect Sikura, Perlini and Kampf to be resigned in the coming weeks.

Anton Forsberg is a bit of a wild card and I honestly haven't heard anything on his contract negotiations. Maybe the Hawks don't even know yet.

More as it comes in.

Join the Discussion: » 523 Comments » Post New Comment
More from Tyler Cameron
» Farewell
» My Favourite Blackhawks Team
» What's the future in net for the Blackhawks?
» What could the Blackhawks look like next year?
» Mailbag - Blackhawks Postmortem Edition