Wanna blog? Start your own hockey blog with My HockeyBuzz. Register for free today!
We are still about a month away from the Penguins and other NHL teams ramping up their pursuit of new players via signings and/or trades. Before we get to that point I wanted to take a peek at the Penguins salary cap situation heading into this very important time of the year.

All information and images were pulled from Cap Friendly

Compared to the rest of the league the Penguins do not compare favorably. Only the Vegas Golden Knights have less cap space heading into the 2019-20 season and that is because they are already over the cap. Pittsburgh only has $3,916,667 to work with. The Predators are third worst at $7,108,334. These figures are under the assumption the salary cap is going to be $83,000,000.

Here is what the Penguins current roster looks like 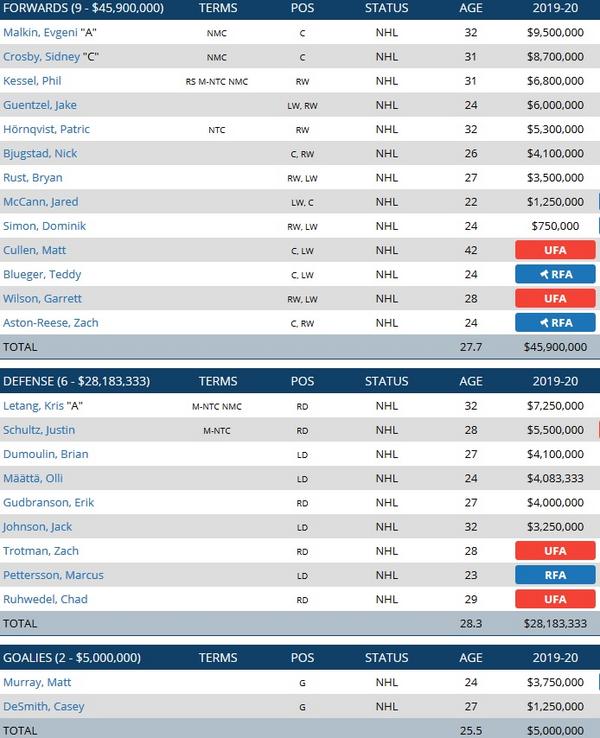 When you account for Marcus Pettersson’s extension, which I believe will be around 2M, then the Penguins spending cash drops to around 1.9M. The Penguins would only have 18 players signed after the Pettersson contract and if you allocate ~750k for the final two roster spots Pittsburgh is left with about 400k.

The rumors about Phil Kessel and Olli Maatta make sense when looking at the Penguins salary cap situation. They are out of money and these are two players they think will have a market. However, they are not the prime reasons the Penguins are struggling to manage the cap. There are quite a number of mid-tier contracts the team is not getting optimal value from. They include: Patric Hornqvist (5.3M), Nick Bjugstad, Erik Gudbranson (4M), Bryan Rust (3.5M), and Jack Johnson (3.25M).

Most of these contracts have a best case scenario of breaking even from a value standpoint. Some of the worst ones are judged by how much harm they cause the team instead of how they help the team.

This is a less than an ideal situation heading into the summer and we know how the prior two turned out.

Join the Discussion: » 127 Comments » Post New Comment
More from Ryan Wilson
» Ron Hextall talks future
» Bryan Ru$t will be staying with the Pittsburgh Penguins
» Mailbag: GM candidates, center replacements, jersey retirements and more
» So who's the next Penguins general manager?
» My thoughts on the Penguins thoughts from clean out day