Wanna blog? Start your own hockey blog with My HockeyBuzz. Register for free today!
Jim Rutherford spoke to NHL.com's Mike Zeisberger about the upcoming trade deadline and he had some relevant quotes I am going to pass along

"If we could add another forward to give us a little more balance in our Top 12, we'd do it if it's someone who we think is the right fit."

-- My 1-on-1 Q&A with #penguins GM Jim Rutherford on the approaching Feb 24 trade deadline https://t.co/MPySvrUDj6

"If we could add another forward to give us a little more balance in our Top 12, we'd do it if it's someone who we think is the right fit," Rutherford said.

Let's focus on the forward part of things for now. A depth forward who can give the team more balance and is the right fit. It sure sounds like they have a good idea of what they are looking for. The answer is right there and some of you aren't going to like it. The player is a good fit in a depth role and has played that role on the team prior. In fact he won two Stanley Cups with the Penguins before he was traded away in the summer of 2018. The team had bailed on the reasons they won and wasted two years toiling around searching for grit. The player of course is Conor Sheary.

Where there is smoke there is fire and during a Sportsnet intermission the other night none other than Elliotte Friedman stated he wouldn't be surprised if Jim Rutherford brings back Conor Sheary.

Most GMs are pretty secretive this time of year. Then there is GMJR. I talked with him last night and he had plenty to say about his trade deadline plans. Read about it here: https://t.co/tSbWf04BvM

One name that has emerged in numerous reports is Conor Sheary, the former Penguins forward who was traded to Buffalo two years ago. Rutherford refuses to be quoted on players who play for other teams and refused to confirm or deny the reports. However, he remains fond of the skilled forward and has mentioned multiple times over the past two seasons that Sheary was moved for salary cap reasons, not performance reasons.

It’s believed that the Penguins have a large list of forwards on their wish list and that Sheary, who is capable of playing either wing, is one of the many players on that list.

I think it is a very good idea. He's a solid depth player. Yes, he still falls down a lot. Yes, he still has a speed burst. No, he isn't ever going to lead the league in 5v5 points per 60 again. He can play up and down the lineup and find success. He can punch above his weight in a top six role if the team is in a pinch. Ideally, he would stay in a depth role, but hopefully used more favorably than he has in Buffalo. Right now Sheary isn't getting any favors from Ralph Krueger. He always starts in his own end and his quality of teammate has also bottomed out. 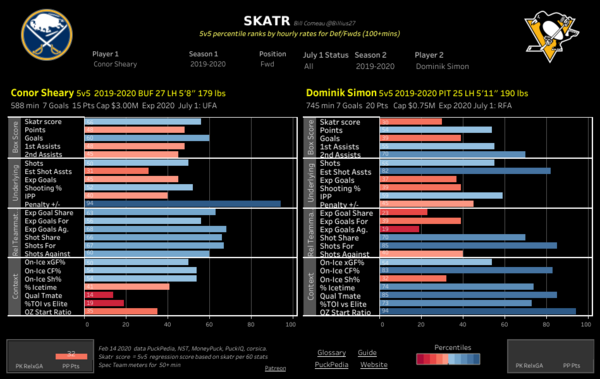 Even with those hurdles his underlying expected goals and possession marks are still good. His offense, all things considered, isn't bad either. Since 2015-16 Conor Sheary has put up the following 5v5 points per 60:

Outside of the one year he was stapled to Sidney Crosby's line you can see he is consistently in the 1.54-1.64 range. That is usable depth when you combine it with his other underlying numbers. I think he compares favorably to someone like Domink Simon who I added to the chart above. I think Dominik Simon is a good complementary player. I feel the same about Sheary. I think his speed and ability to chip in on offense fits perfectly for how this team is constructed again. Sheary fits the mold of the teams that won the Stanley Cup. He doesn't fit the mold of whatever the last two wasted seasons were.

This one makes a lot of sense and checks all the boxes the Penguins are looking for. The cost to acquire should be minimal. It's almost like they should have kept him in the first place instead of chasing a Tom Wilson revenge plot fantasy.