Wanna blog? Start your own hockey blog with My HockeyBuzz. Register for free today!
The Pittsburgh Penguins and Jeff Carter have come to terms on a new two-year contract worth 3.125M per year.

The Penguins have agreed to terms with forward Jeff Carter on a two-year contract extension.

We can talk about the value of the contract and the player for the next two years momentarily. Let’s talk about the most important part about this deal and what it means. This is a clear message to the core and the fanbase that the band is sticking together. I can’t imagine giving the 37 year old Carter another two years unless they had the full intention of pushing their chips in the middle and still going for it.

There is an alternative timeline where Tristan Jarry is mediocre or worse, Evan Rodrigues doesn’t help keep the offense afloat in Malkin’s absence, and Kris Letang missed significant time at the beginning of the year. What does Hextall do then? The Penguins resilience this season has earned them the trust of the new front office and ownership. For me, this is a great thing. I’d rather go down with the ship than have any semblance of a what if with Crosby and Malkin. You’ll never have these players again. Why leave the dance floor early?

As for Jeff Carter I don’t have to many reservations about the deal. He’s been a really solid depth player for the Penguins and has the potential to go on heaters scoring goals. He is a natural scorer on a team that needs finishing help. 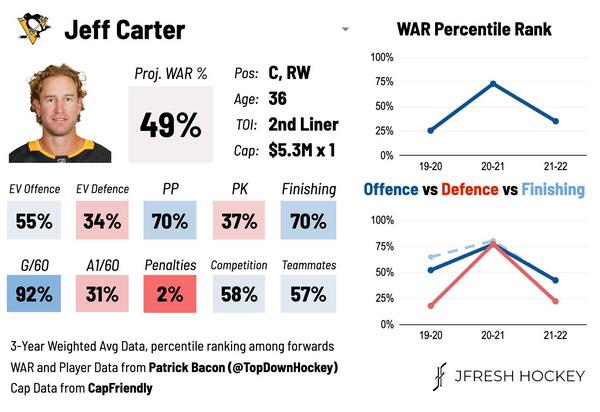 I am not expecting Carter to keep up his goal scoring the way he did when he first came over from the Kings. There is a much greater than zero chance he looks like a 1M player or perhaps even worse. I don’t think it is the likeliest path. Carter if versatile and if center proves to be too much he can always switch over to the wing. Evan Rodrigues could be an interesting candidate for third line center if the team moves to re-sign him. 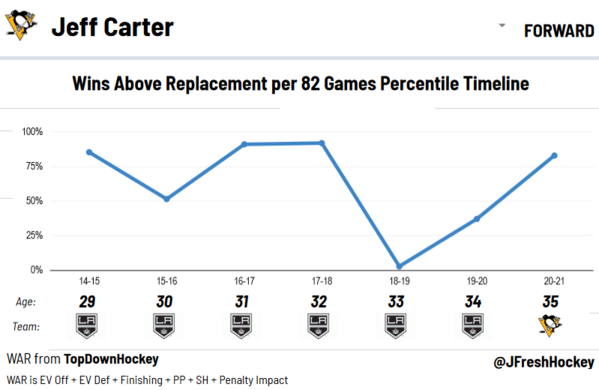 I’m good with the risk here because we’ve seen what the Penguins went through trying to replace Nick Bonino. Jim Rutherford spun his tires for years and it wasn’t until Ron Hextall’s trade with the Penguins that the center balance returned to similar form like during the back-to-back Stanley Cup titles.

All in all I think today’s piece of business was decent enough when talking about Jeff Carter’s on ice impacts and I think it is great news for the overall direction the Penguins seem to be heading in. Here’s to some new extensions for Evgeni Malkin and Kris Letang.

Join the Discussion: » 150 Comments » Post New Comment
More from Ryan Wilson
» Mailbag: GM candidates, center replacements, jersey retirements and more
» So who's the next Penguins general manager?
» My thoughts on the Penguins thoughts from clean out day
» Thoughts on the big picture and Game 7 after another early playoff exit
» Game 7 updates for Sidney Crosby and Tristan Jarry