Wanna blog? Start your own hockey blog with My HockeyBuzz. Register for free today!
There’s not speaking negatively about a current player on your roster because you don’t want to be rude to the player or tank his public value and then there is total lunacy. Rutherford falls into the total lunacy end of the spectrum.

I just spoke with Jim Rutherford. He had plenty to say about Jack Johnson and “the anti-Jack Johnson people.” You’ll want to read this. Read it and sign up for 40 percent off, or a 7-day free trial, all by clicking here: https://t.co/zhbdzg15wi

“Here’s my summary of this situation,” a terse Rutherford said. “Maybe Jack Johnson isn’t as good as I think he is. Maybe. But he’s not as bad as all of the anti-Jack Johnson people think he is. I’ll tell you what he is: He’s a solid, third-pairing defenseman if he’s playing with the right guy. He’s a player that I happen to really like and I think he’s a better player than a lot of people want to give him credit for.”

Sure he is, Jim. You known best. You’ve been the foremost expert on Jack Johnson. You did draft him #3 overall in 2005 after all. You have maintained your expert status on Jack Johnson for 15 years. You even love to share that expertise with rival teams.

“I don’t think he had a bad year. He was a healthy scratch at the end of the season. I know the reason why. It wasn’t because of how he was playing.”

Yeah man, you sure knew. The Penguins are 1-7 in the playoffs since those comments, 1-6 with Johnson in the lineup. Johnson has been scratched for one playoff game during his two years as a Penguin and it was one of the Penguins better performances. The Blue Jackets have gone on to earn their first playoff series win in 2019 sweeping the fourth best regular season team of all-time. This year they “upset” the Toronto Maple Leafs to make it further than the Penguins for the second consecutive year. No, Jack Johnson is not the sole reason for either team’s success, or lack thereof. It does however speak to the Blue Jackets knowing what they are doing more than the Penguins. On paper they don’t have a better roster than Pittsburgh. Columbus make the most out of what they do have unlike the Penguins. Columbus definitely knew better about Jack Johnson.

How about the “if he’s playing with the right guy”. Who the hell is the right guy if it isn’t Kris Letang?! Kris Letang was his partner for over a month. He is one of the very best defensemen of his generation. He is still really good. He was DESTROYED by Johnson

Here is Letang without Johnson 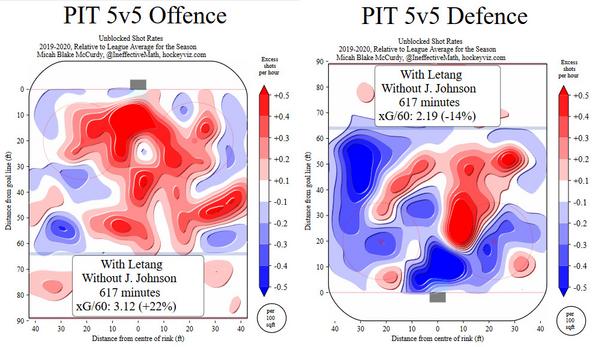 Here is Letang with Johnson 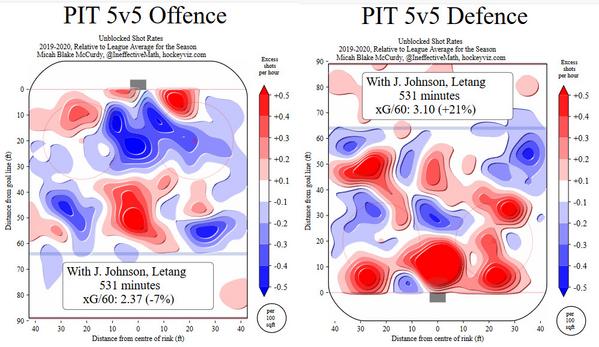 
If Letang isn’t “the right partner” then who the hell is? Do the Penguins need to trade for Victor Hedman? Do they need Cale Makar? Does Ron Burkle need to invest in a time machine to get Erik Karlsson from five years ago? Can we get Nick Lidstrom or Ray Bourque? Who the hell is the right partner?!

Based on Rutherford’s work the last few years maybe we can look forward to Rasmus Ristolainen being a Penguin.

Jack was better this season and is a totally capable guy,” Rutherford continued. “A good team guy.” 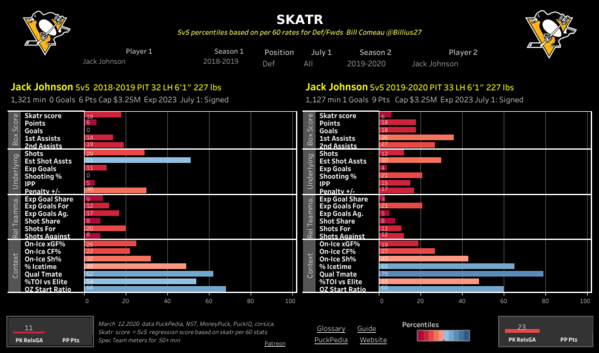 I think Jack was pretty good this season,” Rutherford said. “He changed up his training regimen before the season started and you could see the difference. He gained half a step. He’s one of those guys, he plays a very heavy game. He’s very hard to play against down low because he’s so big and strong. He’s also a very good penalty killer.”

He's in the best shape of his life!

It gets better. He is still convinced Jack Johnson being bad at hockey before he was a Penguin wasn’t relevant. He is genuinely mad people predicted how things would go. He was under the disillusion gone the Penguins crest or Gonchar’s whispers would magically morph him into a good player.

“It’s an unfortunate thing,” Rutherford said. “People have the right to cheer for whoever they want. I understand that. In this case, though, it was predetermined before Jack even played a game here that some people were going to be against him. I think that was very unfair.”


People correctly called you out on DAY ONE because there was over a decade sample of Jack Johnson being a terrible player. Day one people accurately predicted exactly what was going to happen with this signing. People who criticized this on day one have been proven 100% correct. You are wrong. This is Jim Rutherford being what the kids call, a snowflake. A snowflake who is going above and beyond defending the player, not for Johnson, but for himself. Rutherford doesn’t do well with criticism and this is his way of pushing back to defend himself. He is selfish. He is wrong. He is petty. He is a snowflake. He is trying to project his failure on us.

Brace yourselves for more:


“He’ll be able to play out his contract,” Rutherford said. “Whether it’s for someone else for it’s for the Penguins, he’ll play at least (three more seasons) what’s left on his deal. The thing about him is that he takes extremely good care of himself. He’s in great shape and he’ll continue to be in great shape because he’s such a professional. So I don’t have concerns.”

It is going to impact your cap. You get negative value from a 3.25M player. You don’t have the luxury of wasting money. Your mid-tier contracts are mostly bad. You’ve been bad since 2017. At this point how many of the 2015-16 moves were just random luck? Rob Scuderi was traded away for all the same reasons Jack Johnson is being praised for.

Rutherford’s Carolina years were just a jumbled mess of random moves. Much of his Penguins tenure has been the same way. It figures one of the things he has been consistent with has been his support of Jack Johnson.