Wanna blog? Start your own hockey blog with My HockeyBuzz. Register for free today!
Moving along in the search for a new goalie for the Penguins I will focus on a pending UFA by the name of Linus Ullmark. The Sabres goaltender will be 28 later this month and has a rather limited NHL sample. Ullmark has played in 115 NHL games spread out among six seasons. He has never been a full-time starter. He is coming off of a one-year contract paying him 2.6M.

The Penguins wouldn't/shouldn't be looking to give somebody like Ullmark the keys to be the starter, but if you were looking to create a true 1a/1b setup I very much believe Ullmark could be part of an arrangement like that.

Needless to say Ullmark has not played behind good teams. He has been a Buffalo Sabre for his entire NHL career. Having an "easy" game was never a thing for him. The Sabres are atrocious. Given his difficult situation I think while his numbers don't jump off the page they are fairly respectable 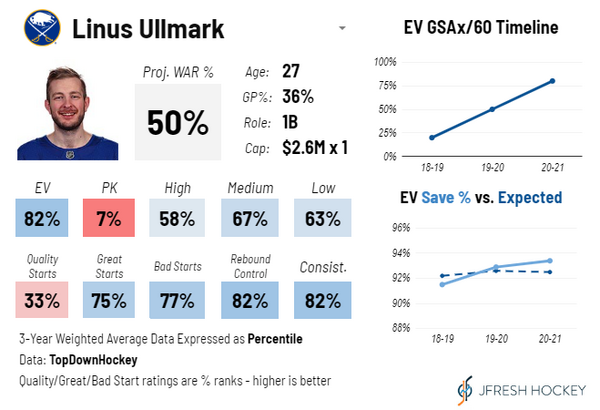 The previous two seasons his actual save percentage was higher than his expected save percentage which is about all you can ask for as a Buffalo goaltender not named Dominik Hasek or Ryan Miller. He has a shade of blue in many of the categories above which is good. His penalty killing save percentage is certainly problematic and is the one significant drawback. The Penguins would probably love to improve in that area, but one thing to keep in mind is that penalty killing save percentages don't carry over year to year. There is a lot of variance in that particular area even among the goalies who are considered great. For example, Andrei Vasilevskiy has gone .911 (2nd), .864 (35th), and .880 (23rd) the past three years in his save percentage while killing a penalty. Ullmark was .860 this year, DeSmith was .838, and Jarry was .835. Vasilevskiy is widely considered the best goaltender in the sport during this time frame and even his PK save percentage fluctuates. I think looking at a save percentage that is above expected and a respectable high-danger save percentage means more than the PK stuff. Jarry was poor in all three areas last year 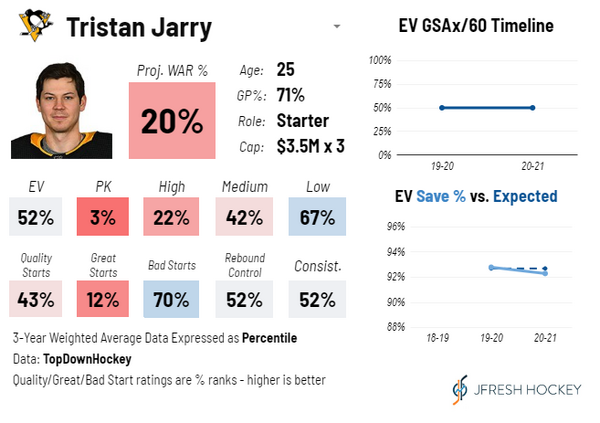 Ullmark's limited NHL sample is something valid to be concerned about. It is also what should push his cost down. He shouldn't be getting a high AAV or term. He can certainly be somebody's 1B goaltender on a better team than Buffalo. It will be up to the Penguins to decide if they want a 1a/1b setup. If they do Ullmark should be one of a few viable options budget wise they can choose from who fit the role.

Join the Discussion: » 216 Comments » Post New Comment
More from Ryan Wilson
» Breaking down the Heinen seinen
» Thoughts on Ron Hextall's thoughts
» Penguins continue to go all McGinn on overpaying depth players
» Some unqualified RFA's to look at if Penguins aren't big game hunting
» The Penguins should go save Marc-Andre Fleury