Wanna blog? Start your own hockey blog with My HockeyBuzz. Register for free today!
It appears former Leafs' fans whipping boy Jake Gardiner is a possible option for the Jets as numerous reports across Twitter have him deciding on three teams, Winnipeg, Montreal and the Sabres. Another report came out that there was a 4th mystery team in the mix. That being said Jake Gardiner was expected to go quickly in the UFA period as other options were off the table yet here he is, still available.

If Gardiner is on the Jets list and by all accounts he is how do they fit a salary that would likely be as high as what Myers received from the Canucks into their roster with limited cap space?

With just over 23 million in space available the Jets would have to make some other sort of move to accommodate his likely salary expectations. Consider that Connor and Laine are going to make close to 15 million if each signs a long-term deal add in Gardiner at 6 million and where do Copp and Pionk fit?

The Jets used up some cap space with contracts to Letestu and Bitetto yesterday as depth moves that are both 2-way deals. They have missed the buyout period should they have wanted to use that on Kulikov unless Copp elects for arbitration as their is a window to buyout a player after June 30th in that situation. The logical choice comes down to Perreault and his remaining two years a 4 million per year. The situation is easier without Kulikov next year as that opens up another 4.3 million in space which might as well go to Josh Morrissey.

With all the noise coming out about Gardiner the issue appears to be term and at age 28 it makes sense that the player would want to go to 5 years plus. It would make sense that the Jets only want 3 years and pay a higher amount of salary even with their cap situation as it appears she youth will need spots. Again, in two more years Buff is off the books at 7.6 million so space opens there too.

What would be a fair price for Gardiner and what do the Jets get with him compared to the losses within the defense corps?

Take a look at how he compares for the last 3 seasons vs the exiting Jets defence players.

(all charts from the kind brothers at evolving-hockey.com) 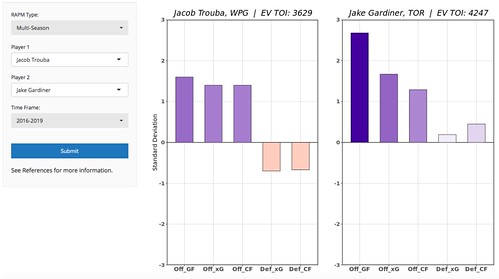 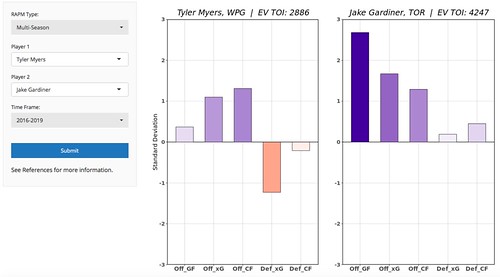 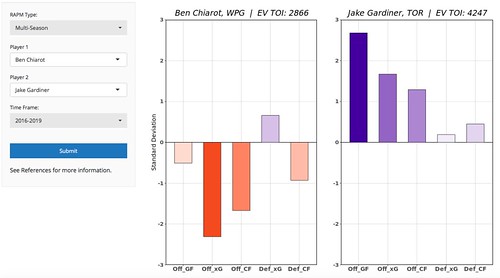 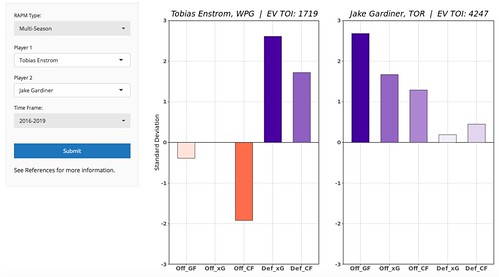 If Kevin Cheveldayoff can lure the defender here he certainly might make Kulikov expendable and perhaps there's a team that will take him as a salary dump with some other asset. But a LD of Morrissey, Gardiner and Beaulieu is not quite as bad is it could be. The fact is Gardiner adds offensive ability and the Jets lost that production from Trouba and Myers but he might also add something the Jets have did not have with any consistency last year a solid transition game from the defensive zone.

Gardiner has his brain farts, they are well documented by Leafs fans but the numbers suggest he's not unlike some one like Byfuglien in that regard- talented puts up points but not the guy you want pinned in your end in a close game. He's a stop gap fix but not a long term solution and for Jets fans they need Chevy to pay him like that and hope he sees options as a Jet compared to other teams.

Join the Discussion: » 126 Comments » Post New Comment
More from Peter Tessier
» Who are the Jets and time for me to let go...
» Jets bet Oilers in scoreless but exciting game.
» Digestion Problems: Jets edition
» Laine shines in 5-2 win over Wild
» Hellebuyck, Laine and Defense shine in 4-1 win over Penguins