Wanna blog? Start your own hockey blog with My HockeyBuzz. Register for free today!
Finishing one win shy of a Stanley Cup, the Bruins will turn to the offseason to adjust their roster and hope to build a team that can get that always-difficult fourth win in the Stanley Cup Final.

However, in doing so, the Bruins will find there’s not much room for new blood inside the Bruins locker room.

The first order of business for general manager Don Sweeney and company will be next week’s entry draft where the Bruins hold five picks in total, including the 30th pick of the first round.

From there, Sweeney will pump all his focus into the team’s restricted free agents, and some key ones at that.

With approximately $13-$14 million in cap space,—depending on how much the salary cap increases for the 2019-20 season—signing their three restricted free agents should be no problem for the Bruins.

But as Sweeney and company negotiate new contracts with Heinen, McAvoy and Carlo in the coming weeks, management also needs to keep in mind that Torey Krug, (UFA) Jake DeBrusk, (RFA) Matt Grzelcyk (RFA) and Charlie Coyle (UFA) are all contracts that expire after the 2019-20 season.

It’s pretty unanimous that most in Boston would like to see the Bruins and David Backes part ways. Whether that comes from buyout or a trade, Backes and his $6 million cap hit is one the Bruins can’t afford, especially with the production that Backes has given him.

His 20 point-campaign in 2018-19 was Backes’ lowest point total of his 13-year career. Although there is no real fit for Backes on a Bruins roster that could get a healthy push for playing time from youngsters like Trent Frederic, Zach Senyshyn and Jack Studnicka, a buyout of Backes does not make much sense.

I should also note that after the 2019-20 season, the $1.9 million retained in the Matt Beleskey trade and the $1.16 million that remains on the buyout of Dennis Seidenberg comes off the books.

Trading Backes is the Bruins best route to take if they indeed are looking to move on from Backes, but that too will be a difficult process. After having a complete no movement clause in each of the last three seasons, Backes has a modified no trade clause for the remaining two years of his contract. In this clause, Backes can submit an eight-team trade list in 2019-20, and then a 15-team trade list in 20-21.

But I would think in any trade of Backes, the Bruins would be forced into retaining at least $2 million of Backes’ salary.

With both of the above options on the table, it sounds like the Bruins have Backes pegged for a fourth line role next season, one that he will have to compete for.

“I thought he best fit in with [Sean] Kuraly / [Noel] Acciari / [Joakim] Nordstrom, in that type of role. At the end of the day, when [Chris] Wagner, Acciari were all healthy, there was competition for those spots, so sometimes he was in there, sometimes he wasn’t,” head coach Bruce Cassidy said.

“I’ve always said it’s best, without knowing what our roster’s going to look like, going into September I’ll have a good idea obviously, but until it’s finalized, you know, where his competition will come from.”

This past season, Backes was most productive when on a line with Nordstrom and Acciari. In 107.33 of five-on-five ice time, the line held the edge in possession at 55.20%, had a plus-3 goal differential and a plus-23 shot differential. The line averaged 2.79 goals for per 60 minutes, and averaged 1.12 goals allowed per 60 minutes.

However, if this is the role the Bruins have in mind for Backes, he may have to do so without Acciari, who he gelled with so well. Coming off a career year in assists and points, the Bruins may not be able to match what other teams will have to offer for Acciari.

With Backes carved for a fourth line role, the Bruins are still looking for help in their top-six, more specifically on the right wing.

But with the Bruins tight on cap space it’s probably best if the Bruins look to what they already have in the organization to fill their need.

That’s where Danton Heinen comes in.

I know, I know, the Bruins have been there done that, but I think it’s something that can work, and that’s if the Bruins are willing to break up the trio of Brad Marchand, Patrice Bergeron and David Pastrnak.

Moving Pastrnak to the right of Jake DeBrusk and David Krejci gives you one heck of a second line. When you take a closer look at the numbers, Heinen on a line with Marchand and Bergeron is not as bad as you may think. 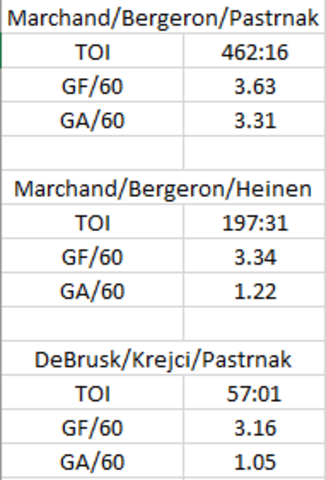 Yes, you lose a little offensive punch by moving Pastrnak off your top line, but with Heinen, you get a very defensively responsible line, and one that will score nearly as often as it did with Pastrnak on the line.

I expect Heinen’s new contract to pay the 23-year old about $2 million per season. Heinen’s $2 million combined with the $11 million or so that Carlo and McAvoy will combine for puts the Bruins right up to the cap ceiling.

That’s where Kevan Miller comes in.

With the emergence of Connor Clifton in the Stanley Cup Playoffs, and players like Jeremy Lauzon and Urho Vaakanainen ready to make a push for the Bruins roster, moving a blueliner is the Bruins most logical way of freeing up cap space.

Although trading Torey Krug would provide the Bruins with the biggest return, locking up their top power play quarter back is the smartest option there. Trading either John Moore or Miller is the option the Bruins should explore.

Miller has one year remaining at $2.5 million, while Moore has four years left at $2.75 million. Although the cap figure is low, I don’t see many teams getting excited at having Moore locked up for four more years after he fell down the Bruins depth chart throughout the course of the season.

A gritty, yet, often injured Miller, I think is a safer bet, especially for a team looking for a veteran defenseman on their bottom pair, and one that brings a lot of toughness to the table.

The cost for Miller would be extremely low, as a late-round draft pick should be the asking price for Miller.

Trading Miller, and signing their three remaining unrestricted free agents won’t leave the Bruins with nearly enough cap space to sign who I think was one of their best forwards in the playoffs: Marcus Johansson.

Sweeney and company struck gold with their deadline acquisition of Johansson. After injuries derailed his start in Boston, Johansson really stepped his game up in the playoffs, and doing so certainly earned him a nice payday in the coming weeks.

Both the Bruins and Johansson have made it known they would love to come to terms on a new contract, but it sounds like both realize that from a financial standpoint, it’s very unlikely.

“I told Marcus that I did have the same, along the same lines, with the RFA side of things that we have some things we need to clarify internally before I can definitively tell him,” Sweeney said earlier this week. “We found that Marcus was a really good fit for our hockey club. I was proud of how he got injured, came back and elevated his play, was really invested, thought he fit in really well with Charlie [Coyle] coming in.”

Johansson and Coyle showed tremendous chemistry in the postseason and more often than not during the Bruins run to the Stanley Cup Final, they were the Bruins best line on a nightly basis.

Unless something crazy occurs, the Bruins roster on opening night come October could look very similar to this: