Wanna blog? Start your own hockey blog with My HockeyBuzz. Register for free today!
Over the past half century the hockey rivalry between the NHL teams from Pennsylvania's two largest cities -- Philadelphia and Pittsburgh -- has been one of the best in sports with the two clubs having faced off against each other 328 times in regular season (287) and play off (41) action and the Flyers holding an overall edge of 175-123-30. The 329th meeting takes place at Lincoln Financial Field across 11th Street from the Flyers' Wells Fargo Center home ice for the 2019 Stadium Series Game with the NHL looking to exceed the crowd of 67,318 that attended the previous outdoor game between the two clubs at Heinz Field in Pittsburgh almost exactly two years earlier on February 25, 2017.

Pro hockey in both cities goes back much further than the advent of the Flyers and Penguins in 1967, however, and so here are a few tid bits about the history of our game that so deeply connects Philadelphia and Pittsburgh ...

While the history of pro hockey in Philadelphia only goes back to 1927 with the advent of the Can-Am League Philadelphia Arrows, in Pittsburgh it dates back to 1895 when the Steel City became the first metropolitan area in the US to professionalize the game. 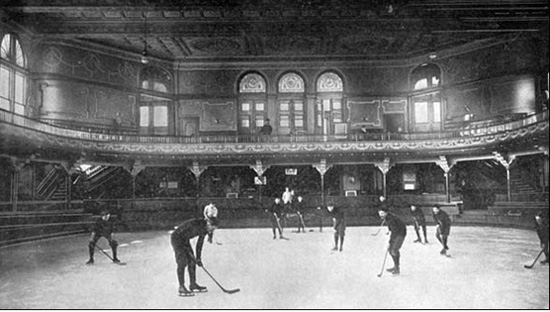 Hockey comes to Pittsburgh in 1895

In 1925 the NHL decided to add Pittsburgh as a seventh club to the then just eight year old circuit making the expansion Pittsburgh Pirates the third club to be based in the US joining the Boston Bruins and New York Americans.

It did not go well. 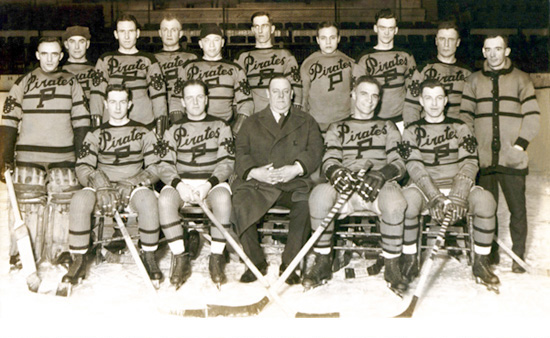 While the Pirates made the playoffs in their first and third years, the club never won a round and by its fifth season in 1929-30 the team had crashed both on the ice and at the box office even faster than the stock market winning just five of its 44 games (5-36-3) and losing $400,000 even after selling off its best players. With its aging home arena, Duquesne Garden, a former trolly barn also in serious disrepair, owner Benny Leonard moved the team out of Pittsburgh across Pennsylvania to Philadelphia where it became the Philadelphia Quakers.

And there it did even worse. 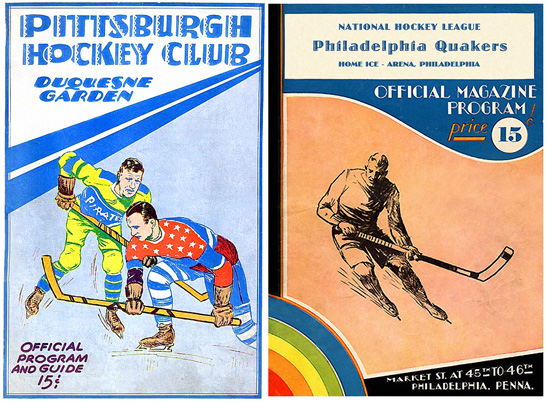 Sharing the ice at the 5,000-seat Philadelphia Arena at 46th and Market Streets with the C-AHL Philadelphia Arrows, the club adopted the Orange and Black sweaters of the same design as those being worn by the Flyers in the Stadium Series game with the Penguins with the exception of the Flyers logo on the front in place of the script Quakers logo. 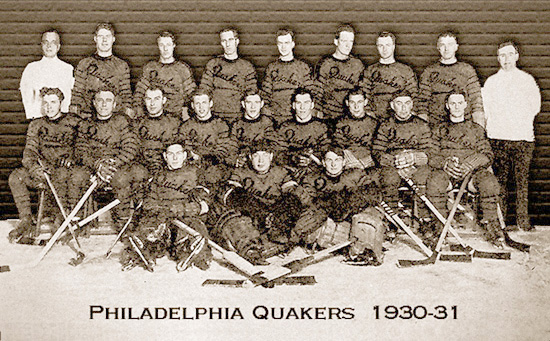 Despite having a then 19-year old future Hall of Famer Syd Howe in its lineup and Hall of Fame referee Cooper Smeaton as coach, the Quakers won just four games (4-36-4) -- still the NHL record for futility -- and being outscored 184-76. Leonard suspended operations of the club after that single 1930-31 season and eventually surrendered the franchise back to the league in 1936 without ever icing another team. 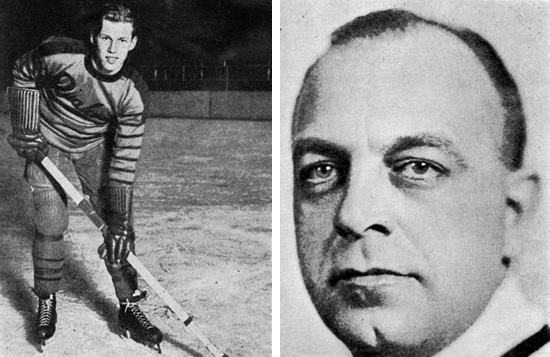 While both cities continued to host a number of minor league clubs, the NHL would not return to either Pittsburgh or Philadelphia for more than three-and-a-half decades with the Flyers and Penguins both joining the NHL with the league's expansion from six to twelve teams in 1967.

THE ON ICE PITTSBURGH-PHILADELPHIA PRO HOCKEY RIVALRY BEGAN IN 1936 BETWEEN THE I-AHL PITTSBURGH HORNETS AND PHILADELPHIA RAMBLERS ... 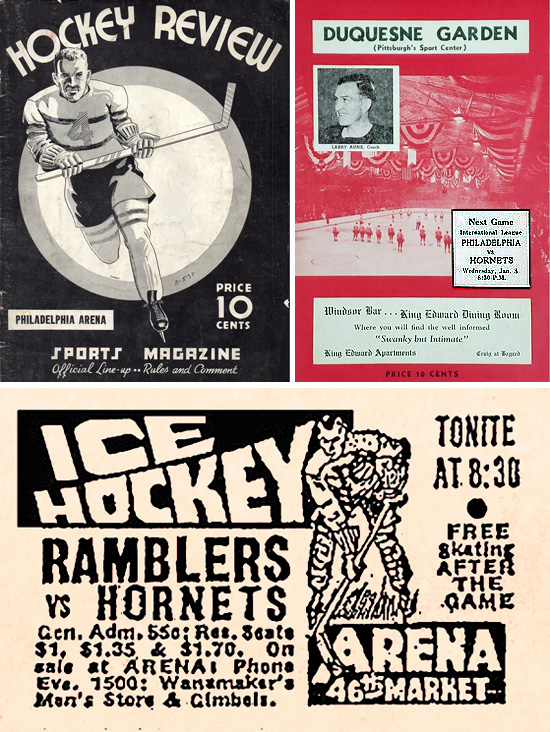 THE FLYERS BEAT THE PENGUINS IN ITS FIRST EVER REGULAR SEASON HOME GAME ...

After opening its first season with three road games, the Flyers played their first ever regular season home game on October 19, 1967 in what was also the first ever meeting with the Pittsburgh Penguins, Doug Favell stopped all 21 Pens shots in the 1-0 shut out victory before 7,812 at the then brand new Spectrum. The Flyers' lone goal was scored by 32-year old "rookie" LW Bill Sutherland who beat maskless Pens' goalie Les Binkley at 2:59 of the third period. Ironically Sutherland almost missed the game when a Spectrum guard refused to believe that he was a player and wouldn't let him in the building. Saturday's Stadium game is the 329th time the two clubs will meet in regular season (287) and play-offs (41) with the Flyers holding a 175-123-30 edge in the rivalry.

THE PENS 15-YEARS OF FUTILITY AT THE SPECTRUM ...

Over a decade-and-a-half stretch from 1974 to 1989, the Penguins had no greater house of horrors than the Spectrum in which they went 42-games from February 7, 1974 to February 2, 1989 collecting just three of a possible 84 points while going 0–39–3 in Philadelphia. Included in that dominance of the Penguins was a 11-0 victory on October 20, 1977 in which the Flyers outshot the Penguins, 54-20 with Dunc Wilson the victim of all 11 Flyer goals while Bernie Parent collected the shutout. 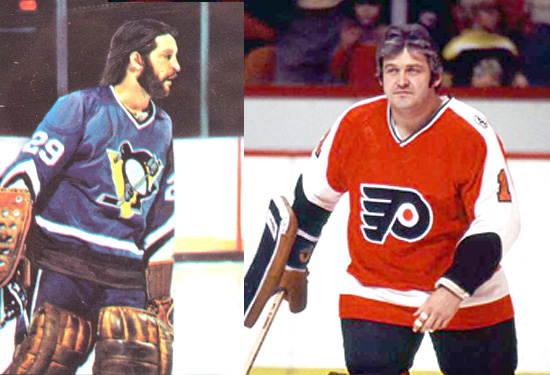 THE PENS ALMOST PREVENT THE FLYERS FROM TYING THE THEN NHL UNBEATEN STREAK RECORD AT 28 ON THEIR ROAD TO 35 GAMES WITHOUT A LOSS ...

One of the most memorable regular season games between the Flyers and Pens took place on December 20, 1979 as the Flyers sought to tie the then standing NHL record of 28 games in a row without a loss. The Penguins rode an early first period powerplay goal by Ron Stackhouse while Pens' goalie Greg Millen kept the Flyers as bay with one great save after another. With the streak looking like it was going to end, the Pens' Bob Stewart was called for a highly controversial hooking penalty at 14:21 of the third period leading to Behn Wilson's powerplay goal with 4:08 remaining and the game ended in a 1-1 tie to keep the streak alive. 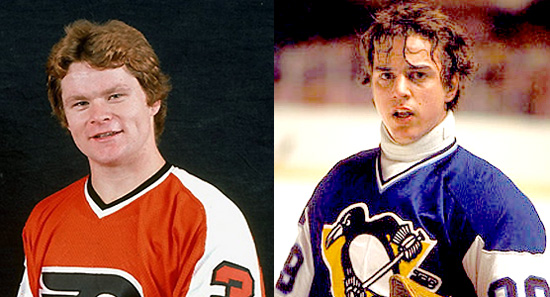 The Flyers extended the streak for another seven games to reach 35 (25-0-10) before iit was snapped. It remains the longest unbeaten streak in the history of North American major league sports.

Visiting players rarely get a standing ovation in Philadelphia -- let alone two -- but Mario Lemieux did.

The first came at the Spectrum on March 2, 1993 when Lemieux returned to the Pens' lineup two months after announcing that he had been diagnosed with Hodgkin's lymphoma which threatened to cut short his Hall of Fame career if not his life as well. On the day of his last radiation treatment, however, Lemieux flew to Philadelphia to play against the Flyers collecting a goal and an assist in a 5-4 loss. He received a thunderous standing ovation from the 17,380 Flyers fans when his name was announced as the Pens' starting center. 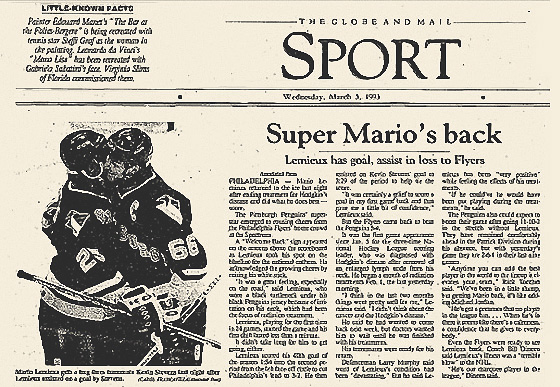 The second time came at the Wells Fargo (then called Corestates) Center on April 29, 1997 after the Flyers defeated the Penguins, 6-3, to win the Eastern Conference QuarterFinals in five games. Lemieux had announced that he would retire after the 1997 playoffs of which this proved to be the final game for the Penguins. Lemieux received a prolonged standing ovation from the full house following the handshakes between the players and came back on the ice to acknowledge it. (He returned to action in late 2000 and played in parts of that the the next four seasons before retiring for good in January, 2006 at age 40. The following October became an owner of the team.)

Doubtless the most memorable Stanley Cup playoff game -- and series -- between the Flyers and Penguins came in Eastern Conference SemiFinals in 2000. After the Flyers unexpectedly lost the first two games at home by 2-0 and 4-1 scores, they headed to Pittsburgh for games 3 and 4 which actually turned out to take them literally "four" games of hockey to win and tie the series. After winning game three, 4-3 in overtime on May 2nd, it took five overtime periods to take May 4th's game four, 2-1, on Keith Primeau's goal at 12:01 of the fifth OT period making it the third longest game in NHL history and the longest since 1936. 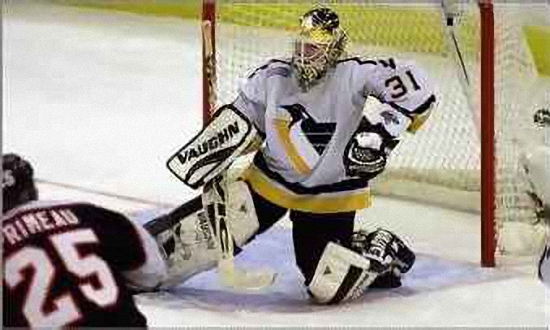 The Flyers won game five easily, 6-3, back in Philadelphia to take a lead in the series which they finished off with a 2-1 win in game five in Pittsburgh to win the series that had started with them being down two-games-to-none. The Flyers lost the nail biting Eastern Conference finals to the New Jersey Devils on Patrik Elias' goal at 17:27 of the third period of game 7 to give the Devils a 2-1 victory after being down three-games-to-one in the series. The Devils then went on to beat the Dallas Stars in six games to win the Cup.

While there is some level of rivalry in baseball and football between Philadelphia and Pittsburgh, those are not ever likely to ever come close to that built up over half a century between the Flyers and Penguins.

And that's just fine with the fans in both cities.