Wanna blog? Start your own hockey blog with My HockeyBuzz. Register for free today!
I attended the Flyers' presser at the Wells Fargo Center on Tuesday morning and there was an awful lot of equivocation in the answers from both Flyers' Governor Dave Scott and team President Paul Holmgren, but the bottom line of the decision was still pretty clear to me despite that. Hexy had a plan -- a pretty good one actually -- to build the Flyers back to a Cup challenging team, but it was also a long term one about which he was, as Homer put it "unyielding in his approach, unyielding".

The Flyers' well attended press conference
To me the real reason for this move at this time is business: fan apathy, many empty seats, lots of "paper", and thousands of three figure priced tickets available on StubHub for $20 or even less for a team that used to announce 20,000+ SRO crowds on Arenavision during every game. There have not been crowd figures announced for a long time now. 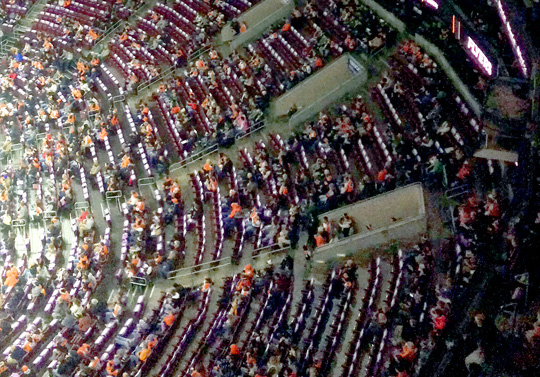 Too many empty seats means more changes coming
"It’s all about winning whether it’s in business or in the hockey team and getting deep in the playoffs and winning the cup," Scott said late in the press conference. "I mean that’s what we’re all after. I personally feel our fans deserve better. I think we have great fans, and they’ve been patient. My vision is, we’ll invest everything we have to, and we’ll look at every opportunity to make it better. But this is about winning hockey games."

The Flyers owner Comcast is a notoriously "bottom line" company, and the Flyers' numbers on that bottom line have been dwindling. Hexy did lots of good things to build for the future, but in five years the team's performance is not appreciably better, they have not won a playoff series during that time, and their performance this year has been "Jekyll and Hyde" schizophrenic at best with the three games in four days roller coaster last week -- a hapless 4-2 loss in Buffalo in Wednesday followed by an excellent 4-0 win over the charging Rangers on Black Friday which was then immediately followed by a catastrophically embarrassing "ept-free" 6-0 loss in Toronto on Saturday -- as a prime example.

Homer said the new GM will not come with any internal ties which would eliminate Dean Lombardi and Chris Pronger. My choice (probably a controversial one but at 73 and in my 50th season involved in hockey and the with the Flyers I think I am entitled to that) would be Brian Burke, a good friend of mine since he was a 22-year old fourth line RW for the AHL Maine Mariners in 1977. 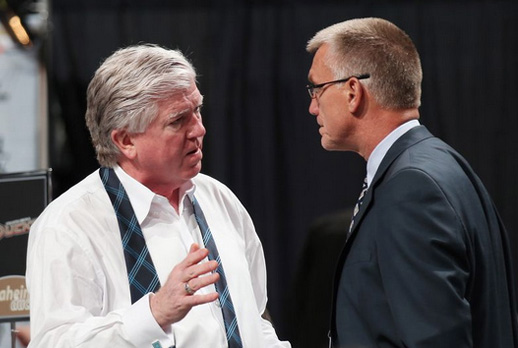 Brian Burke and Paul Holmgren in earlier times
One other thing that is clear to me, however, is that there is still more stuff out there to hit the fan in the weeks to come.

POSTSCRIPT: Tuesday night's ironic and dispiriting 4-3 loss to the Ottawa Senators -- the then 16th and last place team in the Eastern Conference -- in which the Flyers, using their fifth different goalie in just 24 games, had held a 3-1 lead with less than 8 1/2 minutes to go and the Senators using a vagabond 35-year old goalie, Mike McKenna, playing just his 29th career NHL game with just six wins in a 12-year pro career in which he had played for 14 different ECHL and AHL to go along with "cup of coffee" appearances with six NHL clubs, dropped the Flyers to that last place spot in the Conference and pretty much guarantees that more changes are indeed coming. And soon.