Wanna blog? Start your own hockey blog with My HockeyBuzz. Register for free today!
Congratulations to two LONG time good friends -- David Poile and Paul Stewart -- who are two of the five new members joining the US Hockey Hall of Fame in its 2018 class. I have known David, the GM of the Nashville Predators, since his days as an Administrative Assistant and later Assistant GM with the then expansion Atlanta Flames in the 1970s and Stewie going back to when he was a player at the University of Pennsylvania in the mid 1970s. 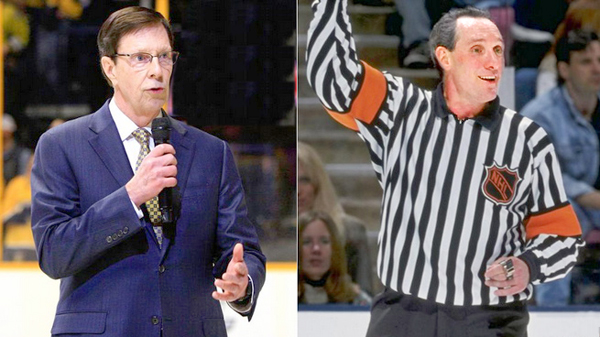 David, of course, went on to long stints as GM of both the Washington Capitals and as the only GM in Predators' history, and on March 1, 2018 he became the winningest GM in NHL history when the Preds defeated the Edmonton Oilers giving him his 1,320th win surpassing Glen Sather's mark of 1,319. After an eight year playing career in the NHL, WHA and five minor leagues, Stewie embarked on his lengthy career as an NHL referee officiating 1,010 regular season and 49 playoff games, the 1987 Canada Cup, the 1991 Canada Cup and two All-Star games. A cancer survivor himself, Stewie has also been a leader in the "Hockey Fights Cancer" movement.

Both have connections with hockey in Philadelphia as David's father, Norman "Bud" Poile, was the Philadelphia Flyers' first GM when the club joined the NHL in 1967 and was responsible for drafting the likes of Bernie Parent, Doug Favell, Joe Watson, Ed Van Impe, and Gary Dornhoefer who went on to win the Stanley Cup seven years later in 1974 and also hired fellow Hall of Famer Keith Allen as the Flyers first coach. Stewie played with the AHL Philadelphia Firebirds as a pro as well as with in college with the UofP Quakers.

Both David and Paul are descendants of Hall of Famers. David's father Bud played for five of the NHL's "Original Six" (Toronto, Chicago, Detroit, New York and Boston) before going on to a 13 year coaching career in the old WHL (Edmonton, San Francisco). In addition to being the first GM of the expansion Flyers in 1967 he did the same thing for the Vancouver Canucks in 1970. Bud Poile was elected to the Hockey Hall of Fame as a builder in 1990. 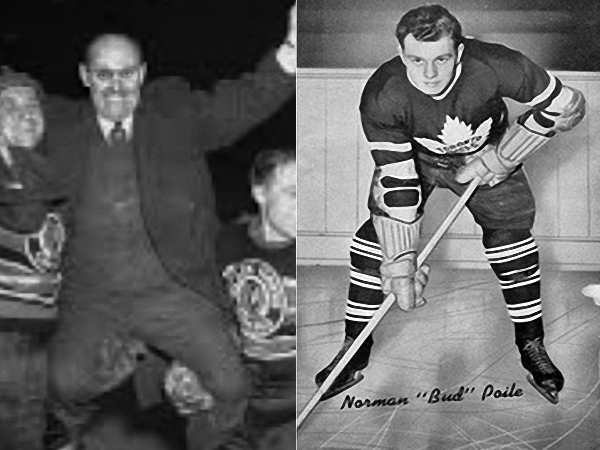 Paul's grandfather was Bill Stewart Sr who was not only also a longtime NHL referee like Paul and was himself elected to the US Hockey Hall of Fame in 1982, but was a National League baseball umpire as well. In 1928 Bill Stewart Sr became the NHL's first U.S.-born referee and served in that capacity until 1941 with the exception of a year-and-a-half he spent as coach of the Chicago Black Hawks which he led to a surprise upset Stanley Cup title in 1938. Stewart was a NL baseball umpire from 1933 to 1954 and also officiated in four World Series (1937, 1943, 1948, 1953) and four All-Star Games (1936, 1940, 1948, 1954). After retiring as an umpire he worked as a scout for the Cleveland Indians and Washington Senators and also remained active in hockey including coaching the U.S. National Hockey team in 1957 posting a 23–3–1 record.

"There were two Bill Stewarts. To the baseball or hockey fan who watched him as umpire or referee, he was a melancholy, disillusioned man of icy-hearted integrity, often engaged in brawls, accidents or crowd uproars. To the people who knew him off the playing field or ice, he was an affable and articulate man with a fantastic memory and remarkable drive. His face and hands were generally tanned, his jaw was wide and determined and his eyes were penetrating and authoritative.

"Perhaps only in his philosophy were the two Bill Stewarts merged clearly, knowingly and importantly. This he probably best expressed in an interview about 15 years ago: 'The most important thing—and schools can't teach it—is to make decisions quick and to have the guts to stick to them once they're made, come hell or high water.' "

This could apply equally to his grandson Paul as both a hockey player and official.

Congratulations to these two terrific hockey men who will both be distinguished additions to the USHHoF.