Wanna blog? Start your own hockey blog with My HockeyBuzz. Register for free today!
Yesterday’s news wasn’t fun to receive. Kris Letang suffering a second stroke despite being completely committed to fitness and his overall wellness doesn’t seem fair. Unfortunately, as humans we can only control what we control. Letang has a small hole in his heart wall which is likely the result of the hand he was dealt genetically. Sometimes you can do all the right things and still have negative outcomes. This has been the case with Letang’s stroke history.

The good news is that the doctors have said the most recent stroke was not as bad as the one in 2014. Since the first stroke in February of 2014 Letang has played in 543 regular season games. He returned in early April after about two months away from the team. Letang was trying to get back on the ice on Tuesday and he was there in person to deliver the news to the team. He was reported to be in good spirits. It seems like as far as strokes are concerned, and that’s quite a scary word, this one is very minor. Letang did a great job recognizing his symptoms and getting treatment right away. All signs point to this not being a career ending and him returning to the team.

We all know Kris Letang wasn’t playing at the level he was last year. At times it has looked like some of the worst hockey he’s played in a while. Not ideal at the beginning of a six-year contract extension at age 35. His play has been one of the most discussed issues this season. The drop off was confusing considering his conditioning and the fact he was coming off a career high 68 points. It has been a noticeable decline. There wasn’t really anything concrete to point to. People were left to speculation. That was until yesterday’s announcement. While I can’t sit here and definitively pinpoint the stroke as the reason for the decline in play this year. I can present a history of Letang’s career and show that the lead up to his stroke in 2014 also coincidentally saw a sharp drop in play out of nowhere. 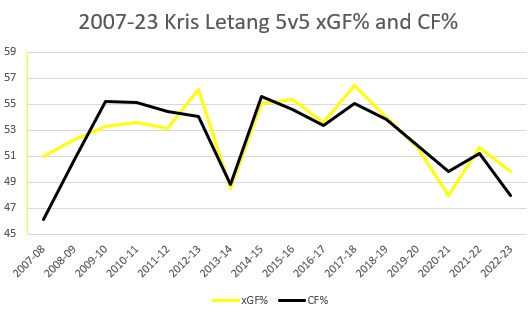 Both strokes saw a drop in play leading up to the diagnosis. The other dip on the chart is 2020-21 and those were the weird COVID seasons. Nothing was normal about that timeframe. 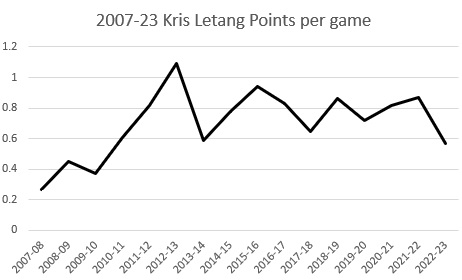 His points per game is the lowest it has been since the 2014 stroke.

This is obviously a very serious situation. Kris Letang, his doctors, and the Penguins are going to do everything in order to make sure he is safe and his path forward is the best for him. From everything reported it appears things should be able to move forward with a positive outcome and Letang will be able to resume his career. I believe we’ll see Letang again this year and I also believe we will see Letang’s standard of play receive a bump much like it did in 2013-14, even at the age of 35.

Letang is already trying to get back to some normalcy. He stepped on the ice today by himself.

Sullivan: "So (Letang) is active. He continues to go through some testing. But he’s being closely monitored by our team of doctors that are advising him every day, and advising us every day. Obviously, we will err on the side of caution with this one."