Wanna blog? Start your own hockey blog with My HockeyBuzz. Register for free today!
The Penguins added another bottom six forward to their team yesterday. Danton Heinen signed a one-year deal with the team worth 1.1M.

The Penguins have signed forward Danton Heinen to a one-year contract.

I want to talk about this signing using two different perspectives. The first one will be talking about the addition of Heinen as a stand-alone move. I think this is a totally reasonable signing. The money and term are 100% appropriate for the role the team will have for him and if he outplays his role all the better. This is proof you do not have to go and spend a premium on fourth line players which hinders your ability to acquire actual difference makers.

Heinen’s underlying numbers are not going to jump off the page, but I’ll explain why I’m fine with it. 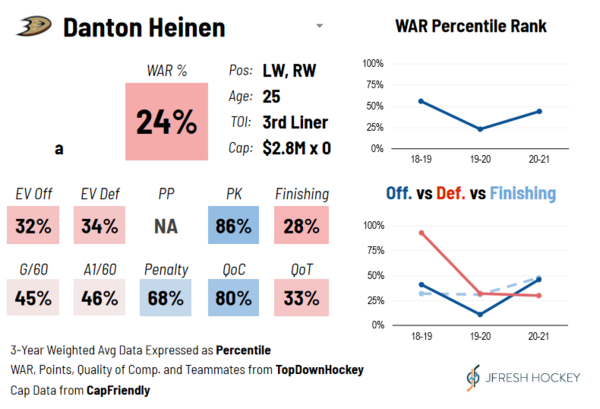 These are fourth line numbers. His penalty killing is a positive which I’m sure is why the Penguins wanted him in the first place. While the other numbers are pretty blah, I do think there is a possibility for a rebound. There are years from his Boston sample where he put up quite a number of points. In 2017-18 he had 47 points in 77 games. In 2018-19 he had 34 points in 77 games. There’s obviously something there. 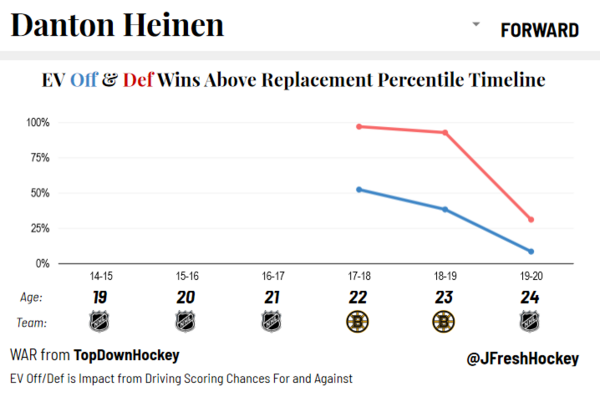 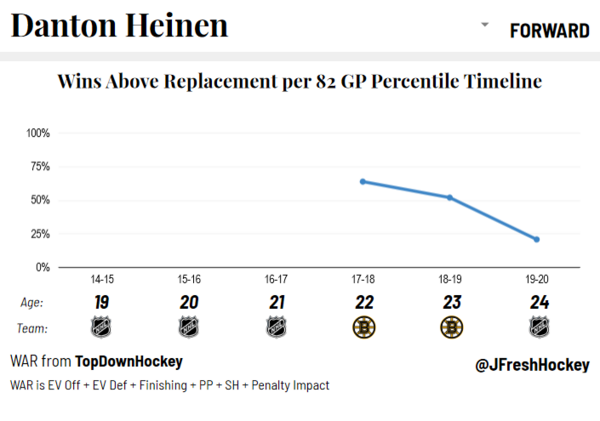 The big question is what happened? I can’t pretend to have the answer. There were things that were obviously working at some point. Heinen is only 26 so while he isn’t really going to improve, he also shouldn’t be let down by his body, yet. His time on ice at 5v5 hasn’t wildly fluctuated either. It is pretty steady in the 12-minute range throughout his career. This past year was 11:12 and that was the lowest.

Even with the drop off a cliff the Penguins should get what they pay for because it is a low term low dollar contract. So, this isn’t a bad signing when you strip away the overall context of what has been happening with the team.

Now, I want to talk about the move holistically. It’s just another bottom six winger with a minimal ability to make an impact on the game. The Penguins are churning through cap space on these types of players. They have done nothing to this point to improve the roster. They have an incredibly narrow path to do anything of substance at this point for a few reasons. The first is obvious. They are out of cap space. Even if they trade Marcus Pettersson or dare I say Mike Matheson there are fewer players out there they can go get. The pool is smaller because they have waited. The benefit of UFA is you don’t have to give up assets and it was the best path for the Penguins this offseason because they don’t have quality assets to spend. Let’s say I magically give the team 5M in cap space there’s not much left in the free agency market, certainly not somebody like Brandon Saad. They needed to go into the offseason with the goal of getting an offensively capable winger (and a goalie). What they’ve done is shuffle meaningless cards in the deck while losing a top nine winger in Jared McCann.

People can say there’s still time left in the offseason and it would be a true statement. It however does not account for the diminishing returns as teams take more and more options away from the Penguins as they sit idle. What was going to be a tough offseason to navigate regardless of what route they went down has now been made way more difficult because of the bungling of the expansion draft and the undisciplined spending on the fringes of the lineup.

Danton Heinen’s signing is fine. The Penguins offseason to this point makes the signing pretty irrelevant.