Wanna blog? Start your own hockey blog with My HockeyBuzz. Register for free today!
The Penguins had been getting saves for the better part of a month. They did not get those saves today. Casey DeSmith had his first poor outing in quite some time. DeSmith had been playing so good some of the stats about the goals he gave up today versus how he had been playing are pretty impressive.

This is the first time in 16 GP Pens have allowed more than 3 goals in a game.

It’s OK. We know Casey DeSmith isn’t a true .933 goalie. Every goalie no matter how good or bad will have a game like this. It’s fine. It is even easier to digest the bad game considering how the month of March went for the Penguins. DeSmith was a big part of that. On to the next start for him.

When you play the Bruins you know who can hurt you on the scoreboard and it is David Pastrnak, Brad Marchand, and Patrice Bergeron

The Bruins offense is like a stick of Fruit Stripe gum. You start with something explosive and good and then quickly it turns into a laborious chew until you open up a new stick and pop it in. Every time the Bergeron line jumps over the boards it is a new stick of gum. The Bruins didn’t run out of sticks of Fruit Stripe today. Brad Marchand had a hat trick, David Pastrnak had two goals, and Patrice Bergeron had one. The Penguins did not do a good job doing the one thing you need to do.

Jared McCann continued his scoring ways. He’s playing the best hockey of his Penguins career at the moment, bloated shooting percentage of 17% aside. This version of McCann opens the door for the Penguins doing some damage in the playoffs. They can’t afford for him to be a passenger and he hasn’t been. 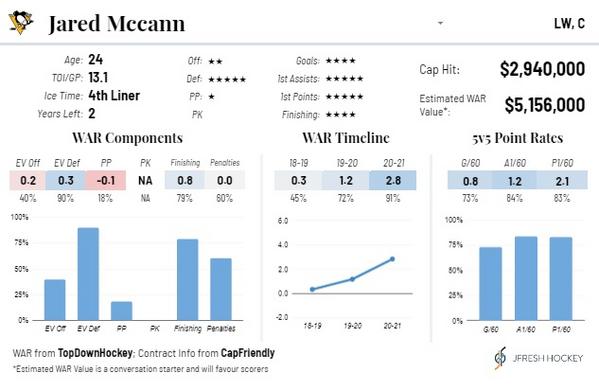 The Bruins star players were the standouts today, but Sidney Crosby and Jake Guentzel put up strong performances of their own. Both players finished with a goal and two assists. Crosby made it a game late in the third period with his shorthanded goal. The Penguins should strategically use their skilled players a little more often on the PK. Especially towards the end of a power play when you can catch some of the players at the end of a shift. We can’t get Crosby and Malkin more shifts at 5v5 so don’t hold your breath.

Sid shouldn’t be going a decade between shorthanded goals.

Crosby also drew a penalty at center ice on a high stick to give the Penguins a potential power play in overtime if they were able to tie things up. Marchand ended that alternate timeline with his empty net goal. People will try and give Sid a hard time about selling the high stick penalty, but it is a lame take. It was a high stick, if he doesn’t do what he did he opens up the possibility of a no call. Players wouldn’t feel the need to embellish (is it an embellishment when a four minute penalty is upheld by replay?) if the officiating was consistent and good at what they do.

Mark Jankowski had a goal and an assist, yes that Mark Jankowski. Trade him while his value is at its highest in months. Might be able to get a conditional seventh round pick now.

Everybody got to take a ride on the Mike Matheson experience today. His turnover in the third period was pathetic. That’s the ride you pay for though. You are going to get a lot more of those kinds of plays than the one from the game the other night. The Penguins were really pushing the play and had a good chance to tie things up based on how Halak was playing today. Matheson’s turnover was a killer.


The Penguins are off until Tuesday and they should have both Teddy Blueger and Tristan Jarry back and available. They will take on the Rangers for two games before heading to New Jersey for another two.