Wanna blog? Start your own hockey blog with My HockeyBuzz. Register for free today!
The Penguins picked up another two points after another two goal game from Kris Letang. The Penguins blue liner capped off the victory in overtime against the New York Islanders. The Penguins overcame a really bad second period being out attempted 25-14 and then flipped things around 21-12 in the third period. Regulation wins are preferable, but two points are two points in what is a very competitive division. 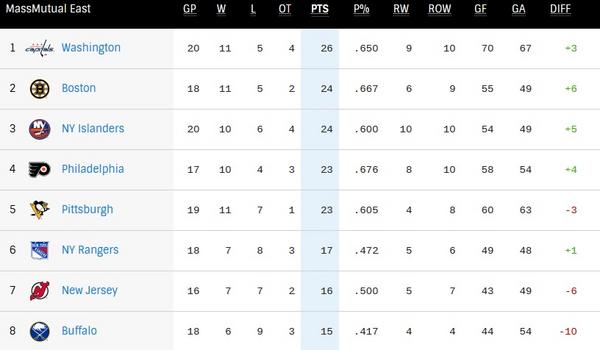 Working in the Penguins favor is the fact they have all of their games left against the New Jersey Devils and the Buffalo Sabres. If you had to pick two teams in the division those would be the two you would want to play the most.

Kris Letang is finding his offensive groove. In the last four games he has four goals and seven points. The Penguins desperately needed him or Malkin to step up their offensive production. Malkin has five points in his last five games which included his nice assist to the guy who just returned to the lineup.

18 seconds into the 3rd period and Jared McCann is already making the Islanders pay! pic.twitter.com/l2XopdgstM

Jared McCann has had issues with consistency, but his speed and his shot are certainly a welcomed addition back into the lineup. If he and Malkin can find some chemistry it would help things out quite a bit. Zucker and Malkin were never able to gain any traction and while the injury is still a big problem for the team there is potential for the second line to be better with Zucker off of it. The trio of McCann-Malkin-Rust had 20 attempts for and only 11 against. They had an xGF% of 70.63 which was a team best by a big margin. McCann has had hot stretches with Crosby. Maybe he has one with Malkin. It would be a nice development.

The teams are back in action at 5PM today. Casey DeSmith will get his first start in a long time with Tristan Jarry getting a much deserved rest after playing seven games in a row.

Join the Discussion: » 254 Comments » Post New Comment
More from Ryan Wilson
» Mailbag: Attend any game from Penguins past, trade values, and more
» Penguins show their pride in Buffalo
» Philly takes round 1 in the battle of Carters
» New lines with Jeff Carter
» Carter talks about next season while Sullivan talks about where he'll play