Wanna blog? Start your own hockey blog with My HockeyBuzz. Register for free today!
We are getting closer and closer to the trade deadline and we know the Penguins are going to make changes to their roster. Jim Rutherford will always be involved with rumors because he is one of the most active general managers in making trades. Penguins fans should be hoping he makes trades sooner than later. Don’t read that as rushed, but the fact of the matter is his deadline deals are not as good as the ones he makes when there aren’t moments to go before a trade freeze. Some options out there I think make sense (Jason Zucker, Mikael Granlund, Tyler Toffoli). There are some other options I am less certain about. This includes the Senators Jean-Gabriel Pageau who is a pending RFA.

There is history with this player and the Penguins if you are to believe the Hockey Night In Canada panel. In January of 2018 Chris Johnston spoke about how there was a lot of interest in Pageau and the Senators had an offer given to them for his services. Elliotte Friedman interjected and said the Penguins were really interested in the player, but did not say it was their offer.

Recently, E.J. Hradek spoke about Pageau and the Penguins on a Pensburgh podcast

I have my reservations about Pageau. I think he is playing above his head this year and his track record is spotty. I have written about him in the past

At the time his CF% and rel CF% were nose diving year over year. His offensive production wasn’t impressive. He’s the kind of player you try to acquire when you are desperate and in a pinch and I don’t think the Penguins are this year. Those things were true about Pageau two years ago. Now? 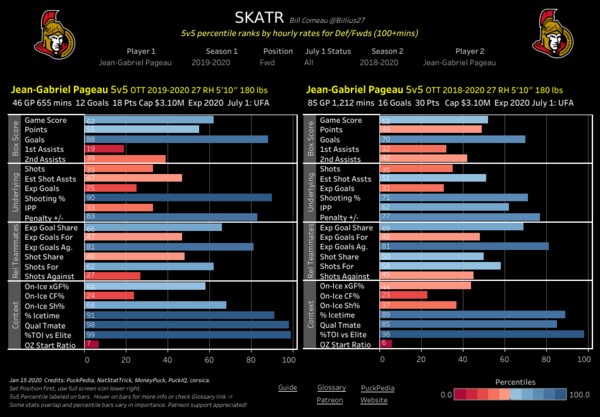 He’s still a negative relative possession player and hovers in the 46-47 CF% range, but his offense has picked up. Why has it picked up? He is shooting a career high 18.4% while having a 10.4% career average. You have to be careful with players like this because the value is derived from the offense and the offense is derived from a lot of variance. If it dries up then what? What are his other attributes? For example, when Bryan Rust dries up offensively (yes it used to be a thing) he still brought other attributes which helped the Penguins. Rust was always good from a possession standpoint and was really great at zone entries. Not sure that is the case with Pageau. Even with the impressive shooting percentage Pageau is only at 1.65 points per 60 this year. Even Alex Galchenyuk is at 1.43. Sam Lafferty is at 1.60 and he hasn’t registered a point since December 4th.

Pageau is having a career year offensively as far as goals go. He has already tied his career high in goals with 19 he had in 2015-16 in 82 games. He doesn’t rack up assists and has that shooting percentage of 18.4%. This will drive up his asking price. I think there are better candidates on the trade market that you could buy “low” on instead of buying high on Pageau.