Wanna blog? Start your own hockey blog with My HockeyBuzz. Register for free today!
For the second consecutive game the Penguins dominated. For the second consecutive game they lost. This time they didn’t even get the satisfaction of gaining the loser point. The skaters for the Penguins put up a quality effort against a good Bruins team and the goaltenders let them down. Matt Murray and Tristan Jarry were not up to the task. Murray was a .727 goaltender and Jarry was at .857. These things do happen over the course of a long season just like when the opposite happens.

Even with the points Pittsburgh banked during Malkin’s absence the team only finds themselves one point away from being out of the wild card spot. No, they aren’t in danger of missing the playoffs, but it does highlight how tight things are heading to the end of November. Historically speaking teams who are four points out at the end of this month do not make it into the playoffs.

Coach Sullivan says Letang has a lower-body injury and will continue to be evaluated.

The team finally got their defense pairings right and now it is going to sideways. Kris Letang cannot be replaced. We don’t have a time table yet for the injury. We know the team doesn’t push play as well when he’s not on the ice. 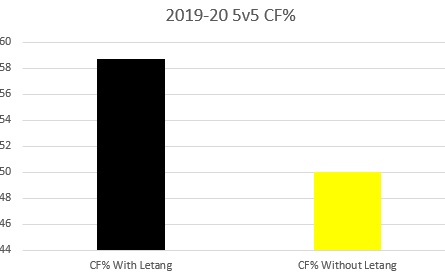 They go from elite to meh. Meh is fine when you have the elite. Meh isn’t going to cut it when it is on its own.

Congratulations to John Marino on his first ever NHL goal. Not only was it on a breakaway, but his goal sparked a temper tantrum from Jaro Halak


Pittsburgh has played really well the past two games. I wonder if that has to do with a certain somebody being back in the lineup? Hmmm. Try not to overthink this one. Getting a future hall of fame center back in the lineup is a good thing. Psychoanalyzing “chemistry” is not.

I spoke about the Bruins top line, specifically David Pastrnak and Brad Marchand yesterday. Believe it or not they had a hand in the outcome of the game. The Penguins goaltending was bad, but these two transcend goaltender play and are quite the handful. Marchand finished with two goals and five points while Pastrnak had a goal and an assist. They are rolling

With their efforts tonight, @NHLBruins linemates David Pastrnak (29) & Brad Marchand (28) have become the 1st set of winger teammates ever to average 2+ points per team game through the opening 14 gms of a season

Speaking of rolling quite a number of players are, but not on the ice

The ‘secret everybody knows’: Drugs like cocaine and molly becoming more popular in NHL https://t.co/kdo5lWufjf

I’m personally not surprised by this, but I’m sure many fans would be floored to know which one of their favorite squeaky clean imaged players are. Might even be some from your favorite team. So the next time you go all in on someone like Evgeny Kuznetsov just know your guy might be next.