Wanna blog? Start your own hockey blog with My HockeyBuzz. Register for free today!
Yesterday Matt Cullen decided to call it a career after 21 years in the league. He played 1,512 regular season games and the majority of them were good. He was a part of the Penguins rebuilding their horrendous forward depth before they were able to win back to back Stanley Cups. With Cullen retired the only players left from the 90’s are Joe Thornton, Patrick Marleau, and Zdeno Chara.

As for today’s main topic

What are your thoughts on Justin Schultz ? What should they do ? He will probably want a raise but his play (with & w/out JJ) doesn’t appear to merit a significant pay jump...

This is a very important question that needs to be answered. Justin Schultz is a pending UFA and according to many sources he will be looking for a raise. This puts the Penguins in a tough position because at the moment they don’t have an in-house replacement for Schultz, nor are they in a great spot to be giving money and term to a player who is underachieving/miscast.

Schultz needs to be propped up by his usage. He cannot drive his own pairing. He cannot do the heavy lifting. We know that from his time in Edmonton when he was being caved in. If you do not give Schultz the proper teammates and role you are not going to have a player whose strengths will outweigh the weaknesses. Pittsburgh did a great job with how they used Schultz when they first got him from Edmonton. In 2016-17 he played a lot with Ian Cole with Brian Dumoulin being his second most common partner. His most common forward was Sidney Crosby. Kris Letang’s neck injury opened the door for this kind of usage, but it showed when given skilled players he can fit in. 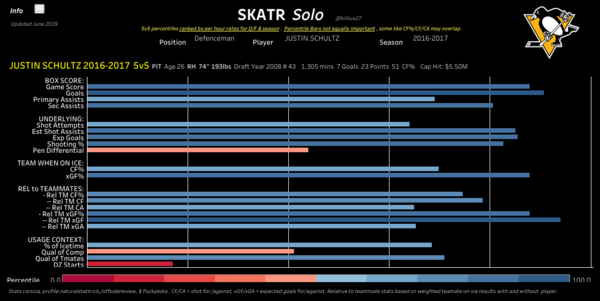 His defensive zone starts were low and so was his quality of competition. He flourished.

In 2017-18 he played most of his time with Olli Maatta while splitting the other time evenly among Ian Cole (traded) and Jamie Oleksiak. His two most common forwards were Evgeni Malkin and Sidney Crosby. 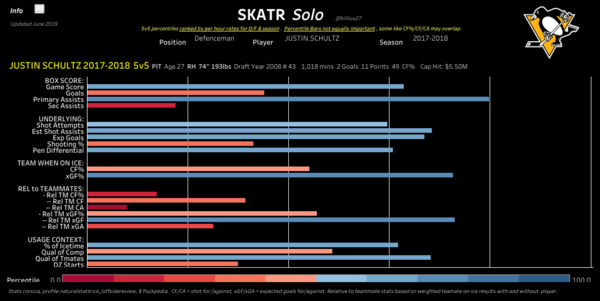 Not as good, but still some offense to hang his hat on. His quality of competition increased and his results are starting to go down.

Last year we only have a limited sample. He suffered that awful ankle injury which kept him out of all but 29 games. The fact is those 29 games were not good. It was his worst year as a Penguin. It’s understandable an injury would negatively impact results. It isn’t understandable to give him his hardest usage with his worst partner. You are asking for it. In 2018-19 Schultz’s most common partner was Jack Johnson. His two most common forwards were Sidney Crosby and Jake Guentzel. 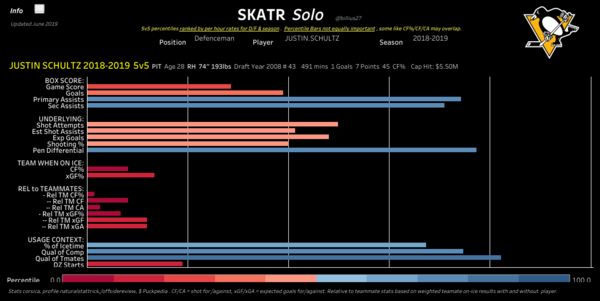 Oof. His quality of competition was the highest it has been and he had nothing to work with as far as a partner goes. He played 383 minutes with Johnson while his second most common partner was Brian Dumoulin at a whopping 33 minutes. The abomination of a pairing put up an xGF% of 34.02 in the three playoff games they played.

You can’t go back and change the past. It was a lost 2018-19 season for Justin Schultz. What you can do is manage the situation appropriately moving forward. Schultz is a 29 year old player who is looking for a raise coming off of a horrendous season. The Penguins chose Mike Sullivan over Phil Kessel for a reason. Hopefully that reason is the ability to manage the roster given to him and put players in the best position to succeed. The Penguins owe it to themselves and Schultz to play him with somebody different than Johnson. They need to learn if the 2018-19 season was an aberration or a trend towards decline. They need to find out sooner than later with his free agency status. Play Schultz with Marcus Pettersson (or Dumoulin) and see if the results are significantly better than they were last year. If they are you can have some confidence that the injury/usage tanked him. If he doesn’t improve then you need to start thinking really hard about finding a replacement for the right side on the second pairing. Elevating Erik Gudbranson’s role will have predictable results. We have about 450 non-Penguins games to draw from and surmise what things would look like. When you shelter Gudbranson and he finds "success" it is just a player treading water with minimal offensive impact. When you shelter a player like Justin Schultz you can get a legit payout that helps the forwards out.

And that’s the problem with this defense group in a nutshell. So many of these players need to be sheltered. You can’t provide everybody the cover they need. It’s poorly constructed and it definitely stems from their 2017 championship run when they won without Letang. It gave them false confidence and undermined the importance of defense depth. The PDO wasn’t going to stay at 1018 forever and it didn’t. Over the course of larger samples we have seen the Penguins ability to move the puck to their forwards hamper success.

Here are the scenarios moving forward. If Schultz is good then you are probably going to have to give him a bad contract to retain his services or lose him for nothing. If he’s bad then you have a big hole in the lineup with no feasible replacement. It would take a crafty in-season trade to dump Schultz and somehow find a right handed top four defenseman, not easy. It’s why I suggested the Kessel and Schultz for Subban trade. I saw the Schultz situation being an incredibly difficult scenario to navigate. It’s not a great situation for the team to be in.

Calen Addison to the rescue?

Join the Discussion: » 139 Comments » Post New Comment
More from Ryan Wilson
» We know how the NHL wants to return now we know the when
» NHL outlines detailed return to play plan against tough odds
» No get out of jail free cards for real or arm chair general managers
» Edmonton lures NHL with plagiarized non-Edmonton footage
» Most players not comfortable with NHL restart plan